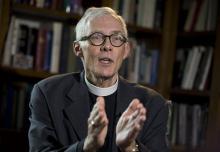 “They take verses about “love” out of context and apply it to things God calls an abomination, but then they wouldn’t recognize the voice, much less the word of God because they either stopped reading it or stopped believing it long ago.”   Cal Thomas

November 14, the National Cathedral hosted Muslim Prayer Services, sponsored by CAIR and ISNA, both Muslim Brotherhood front groups, both unindicted co-conspirators in one of the largest terrorists funding trials in U.S. history. While Christians are upset that the service was allowed to be held in the Cathedral,  Gary Hall said he marveled at the sounds of Arabic prayers which he considered as “a beautiful sacred language.”

Touted as a service to “reinforce tolerance among faiths,” a former Muslim, Dr. Mark Christian, who by the way has a price on his head in Egypt for converting, says that this gesture will never be reciprocated by Muslims because to allow a Christian into a mosque sanctuary to hold Christian lead prayer is considered “unclean” and would “defile” their sanctuary. Joe Richardson, a Christian filmmaker and author agreed.  “Churches cannot even be built in Muslim controlled nations.”  Allowing Muslim Prayer Services in our National Cathedral “is a message to Muslim countries around the world” and it “is not one of tolerance but one of subjugation.”

Defiling the House of God is nothing new to Hall.  In June of this year he allowed Cameron Partridge, a transgender Episcopal priest from Boston University to deliver the sermon celebrating LGBT Pride Month, which Hall “hopes will send a symbolic message in support of greater equality for the transgender community.”

In 2013, according to a Washington Post article, Hall  led the first ever official contingent from Washington National Cathedral in the annual celebration of gay life in the District.  Hall’s pressed blue dress shirt and white clerical collar wasn’t the most head-turning look in a crowd that featured a lot of drag queens with towering bouffants.  “If my being seen in the parade is a visible sign that God loves and accepts people across the full spectrum of human sexuality, it will have achieved its purpose.”

The Cathedral Church of Saint Peter and Saint Paul, popularly known as the  Washington National Cathedral, at Massachusetts and Wisconsin Avenues, is a cathedral of the Episcopal Church.   Of  neogothic design, it is the sixth-largest cathedral in the world, the second-largest in the United States  and the fourth tallest structure in D.C.    The cathedral is the seat  of both the  Presiding Bishop of the Episcopal Church, Katharine Jefferts Schori, and the Bishop of the  Diocese of Washington,  Mariann Edgar Budde.

The Protestant Episcopal Cathedral Foundation, under the first seven Bishops of Washington, erected the cathedral under a charter passed by the United States Congress  on January 6, 1893.   Construction began on September 29, 1907, when the foundation stone  was laid in the presence of  President Theodore Roosevelt and ended  83 years later in 1990 during the presidency of George H.W. Bush.   The Cathedral is an  associate member of the Washington Theological Consortium and is listed on the National Register of Historic Places.

Longtime same-sex marriage advocate  Gary Hall took over as the cathedral’s dean in October of 2012.  Conversations began, even before he arrived, to clear the way for same-sex  ceremonies at the church that so often serves as a symbolic house of prayer for national celebrations and tragedies.  Hall proclaims that he wants to raise the cathedral’s profile, “not just as a house of worship, but as an organized political advocacy center” on a host of liberal issues.   “I read the Bible as seriously as fundamentalists do,  and my reading of the Bible leads me to want to do this because I think it’s being faithful to the  kind of community that Jesus would have us be.”

Gary Hall  says that same sex wedding will be conducted at the Cathedral fulfilling the same role as traditional marriages, following the protocol of the Christian faith.   “In my 35 years of ordained ministry, some of the most personally inspiring work I have witnessed has been among gay and lesbian communities where I have served.  I consider it a great honor to lead this Cathedral as it takes another historic step toward greater equality—and I am pleased that this step follows the results made clear in this past November’s election, when three states voted to allow same-sex marriage.”

“I think straight people have a lot to learn from gay and lesbian families, about what real mutuality and real sharing is. (With gay couples), things are much more mutual and shared and equal. And I think that’s a powerful witness that straight people like me can learn from.”

Hall, who calls himself a “left-wing Democrat”  is pushing another favorite leftist agenda – gun control.   “In the spirit of Dr. King, I want to say that opposing gun violence may have political implications, but it is not primarily a political issue.   It  is a religious issue.  If we want to stand with Jesus and with Martin Luther King, we’ve also got to stand with those who, like them, die by means of violence.  And that means we who follow Jesus and stand with King have to stand against guns.  I believe the gun lobby is no match for the cross lobby.”

Representing a younger generation of liberal Episcopalians who resemble nothing so much as Unitarian Universalists decked out in stoles and surplices; Hall and his ilk  are quick to denounce those who advocate historic Christian teaching, especially moral teaching, as intolerant perpetrators of injustice who must be silenced.  “I have much more in common with progressive Jews, Muslims, Hindus and Buddhists than I do with certain people in my own tradition, with  fundamentalist Christians,” Hall declared.  “The part of Christianity I stand with is the part in which we can live with ambiguity and with pluralism.”

He feels that while that faith communities taking positions on public policy matters is an important and established part of our public life but doesn’t feel “it is  appropriate is for one tradition to try to impose its own moral point of view on the populace.”  Really, and what is he doing?

Actually, what Hall and his ilk are pushing is not really new.  It’s the same old Liberal  Social Gospel  – and it has no part in Christianity.   The only people they are fooling is themselves.

In Obama’s world,  the murder of innocent babies is right; and, being pro-gay military and putting women on the front lines of combat is good.   In Obama’s world, taking from the rich and giving to the poor thus enabling the poor to stay poor is good; however, being rich and giving of your own resources to whom you wish is bad.   In Obama’s world  it’s blasphemy to have a pastor who preaches the true Word of God which states that homosexuality is a sin and a cause for repentance,  but it’s okay  for a pastor to marry homosexuals,  pray for the leaders who wish to stomp on our Constitution, murder babies and  push the homosexual agenda.

It is ever so apparent that with Hall  at the helm of the National Cathedral,  Obama’s world has been mainlined into the Episcopal faith.