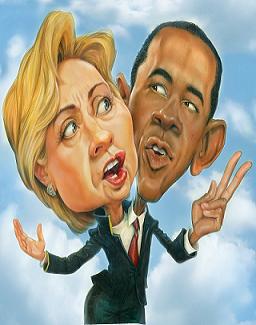 It’s official, Hillary has thrown her hat into the ring!  With the scooby van in full throttle she’s out to prove to American voters that an entitled elitist can transform herself from a loud mouth shrill to a mild-mannered grandmother ready to tackle the problems of the little people.  Let’s hope the “little people” aren’t as easily fooled as the big bad Clinton machine hopes they are. We’ve had years to see how untrustworthy and unlikeable she really is.

In 2004 as Senator she was very critical of the Bush tax cuts, reminding voters that “for America to get back on track….We’re going to take things away from you on behalf of the common good.”  In her book “It Take A Village” she quoted Alan  Arenholt who said “The unfettered free market has been the most radically destructive force in American life in the last generation,” a statement  she not only agreed with but also felt could  not “be permitted to run roughshod over people’s lives.”   From 2004 to 2007 she ran around the country telling us it was time for the end of government for the few to be replaced with “shared responsibility for shared prosperity,” we can’t just let business as usual continue, something has to be taken away from some people,” and we have to build a political consensus that requires people to give up a little bit of their own turf in order to create common ground.”  Translation:  Socialism

Hillary has continuously pushed for ratification of the UN Kyoto Protocol, opposed drilling in the Arctic and Atlantic, supported cap-and-trade taxes and cutting greenhouse gases by 80% by 2050.  In addition she has always been an avid supporter of the United Nations as an “indispensable organization, despite its flaw” and worked to gain support for Agenda 21, the Convention on the Rights of the Child which would destroy parental rights, the Small Arms Treaty which would be used to confiscate firearms, and the Global Health Agenda that pushes for the murder of innocent babies as birth control. As Senator Hillary introduced a Resolution to involve the U.S. in the UN Humans Rights Commission which is behind the homosexual as a civil right push.

In 2000 as part of her Senatorial campaign, Hillary backed licensing and registration for all gun owners.  In 2006 she voted against the Vitter Amendment which would have prevented confiscation of lawfully held firearms during a disaster, a stance she reversed during her first presidential bid when she informed voters guns were part of her culture and her way of life.

While claiming she is opposed to abortion she still feels it should be legal, and paid for by taxpayer money. Hillary worked with the United Nations and UN Global Health Agency  while Secretary of State to force this murder agenda on third world countries. She has even gone so far as to praise Margaret Sanger. You remember Margaret Sanger, the  racist feminist who thought the black race should be aborted out of existence?.

As Senator, Hillary voted to install a fence on the southern border while supporting amnesty. She has been for and against having English as our official language, definitely against local police enforcing immigration laws, and is an avid supporter of using taxpayer funds to provide education and health care for illegal immigrants and sanctuary cities.   She has also been for and against, depending on the crowd, allowing illegal immigrants to obtain U.S. driver’s licenses, health care and jobs.

In 2003 Hillary was against same-sex marriage but supported the U.N. Human Rights Commission declaring homosexual rights a civil right.  She then opposed the Federal Marriage Amendment defining marriage as one man and one woman, supported  Don’t Ask, Don’t Tell repeal and when questioned she said she didn’t see homosexual acts as immoral.   In a forum hosted by the Human Rights Campaign and Logo, during her presidential campaign Hillary said she would move to repeal a section of the Defense of Marriage Act defining marriage as between man and woman.   Obama beat her to it.

Hillary is also an avid supporter of common core, believing families are “too negative” about it.   She called common core the most important “non-family enterprise” in the country, one which the little people just “do not understand.”

Hillary has been involved in one scandal after another since Bill was elected Governor of Arkansas.  There was Whitewater;  the time hundreds of FBI background files on Republican presidential administrations was given to the White House’s director of  security, the firing of 7 white house travel office employees for which Hillary made false and misleading statements to investigators; all the secrecy of the  HillaryCare program; the disappearance of Vince Foster’s files after he committed suicide; the lost Rose Law firm billing records that mysteriously ended up at the White House;  the selling of seats on  the Commerce Department’s international trade missions; renting the Lincoln bedroom to donors; and the close association to several ‘gentlemen’ who helped funnel funds to the DNC, at least two of which plead guilty to violating campaign finance laws, bank fraud, and tax evasion.

Does she really expect us to forget Benghazi and the needless deaths of not only ambassador Christopher Stevens but several military personnel?  Then there are her current scandals involving whether or not she broke the law by using a personal email account for State Department business or the deletion of emails so no one could see them.  There is also noise making the rounds about all that foreign money going to the Bill and Hillary Clinton Foundation, some of which was donated while she was Secretary of State that may or may not have been used to buy favor.

Hillary has always been to the left of Wild Willy and if elected, would govern more like Obama – She supports strong Executive Authority, and by-passing Congress when necessary.  Just like Obama, she sees the Constitution as a nusiance to overcome before annointing herself Queen.

She was the Elizabeth Warren of her day, the leader of the left-wing of the Democratic party. The only difference between Hillary and  Warren is that Warren flaunts her ideology, thrilling the base by making the leftist case as few other Democrats dare. Ever the Alinskyite, Hillary prefers to achieve leftist ends incrementally, in pragmatic guise.  Alinsky was a democratic socialist who worked closely with Chicago’s Communist party.  Most of his innovations were patterned on Communist party organizing tactics although he was smart enough never to join the party.  From the beginning he understood the dangers of ideological openness.  He was a pragmatist, but a pragmatist of the far left.
Hillary understood all of this.  As she noted at the conclusion of her undergraduate thesis on Alinsky, “if the ideals Alinksy espouses were actualized, the result would be social revolution.”  In her letter to Alinsky, Hillary wrote “I have just had my one-thousandth conversation” about Reveille for Radicals (Alinsky’s first book).  Nowadays, people focus on Alinsky’s more famous follow-up, Rules for Radicals.  But Reveille, which Hillary knew inside out, is the more ideologically revelatory work.
Hillary is and has always been far-left.  She is basically unlikable, conspicuously insincere, untrustworthy, arrogant, elitist, and scandal ridden.  She’s not only a permanent fixture in “D.C. she makes insiders look like outsiders.  Yet she wants us to believe she’s for the little guy.