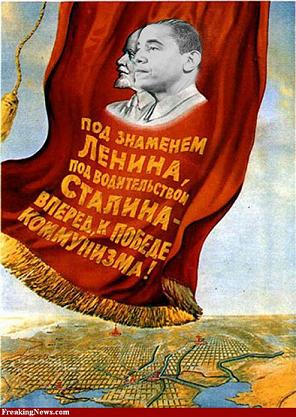 Defiance is a virtue unto itself.  It is its own means and its own end.  Wherever people seek truth and honor, no consequence is foreboding enough to stop them.

In August 1920 the Red Army, led by the Bolshevik, rolled into the Russian town of Khitrovo to implement “Prodrazvyorstka,” which obligated all peasants to sell their crops to the state at a fixed price, leaving only limited food for personal use.   Lenin and the Bolsheviks instituted this program in the name of the “greater good.”  but in reality,  Lenin saw the farming community, not as human beings, but as a mechanism for feeding city residents and the army.

This attitude of collectivism and the treatment of farmers as slaves to the government generated the desire for civil unrest and rebellion.  By the time the Red Army entered Khitrovo, the place was already a fire, waiting to be lit.   When the Army had taken everything from the farmers and had beaten elderly men in public as an example to the rest of the town, the fire ignited.

At the height of what was later called the “Tambov Rebellion” between 50,000 and 70,000 Russian citizens had taken up arms against the oppressive government.  Vastly outnumbered and technologically outclassed, the guerrilla fighters managed to infiltrate multiple levels of Bolshevik society and the government and strike debilitating hits against Russian infrastructure.  So great was the threat that Lenin ordered chemical warfare to be used in the forests where guerrillas were dug in, as well as summary executions of civilians, many of whom were simply in the wrong place at the wrong time.  Women, children and the elderly were placed in concentration camps to be used as bargaining chips.

Lenin when forced to denounce the use of Prodrazvyorstka to end the revolt, attempted to erase all memory of the event by destroying records and removing pubic figures who might recount what had happened.

While the guerrilla fighters  were unable to entirely end Prodrazvyorstka and other tyrannical regulations imposed by Lenin and the Bolsheviks, nor were they able to defeat Lenin or the Red Army, their rebellion was not not a failure.   They showed the Russian people and eventually the world, that there is no such thing as an unassailable empire, that free thinking people will always exist, that the drive for independence is inborn and inherent, and that no oligarchy will stand unopposed for very long.

Those that refuse to learn from the past may wonder why the Tambov Rebellion would even deserve mention today.  The gullibility of the world is hard to ignore.  Americans may well bear witness to similar or far worse tragedies in the coming years, if the current Obama directives and Congressional legislation are any indication.  Since the passage of the Patriot Act many in the private and public arena have willingly surrendered their rights in the name of security to polices like:

FISA:   A domestic expansion of warrentless wiretaps and expanded government ability to spy on American citizens through their private email communications.  Powers were granted under the Bush Administration and are still being used by the Obama administration.

Martial Law:  An executive order signed by Obama  to give himself presidential power  to unilaterally declare a “public or national emergency” for any reason he wishes without Congressional consent or approval and instituted martial law aimed at suppression of the people.

Presidential Directive 51:  Signed by President Bush allocating further power to the president to declare a national emergency for any reason he sees fit and to institute the Continuity of Government Policies.  The document has been only partially released while the balance  remains classified.

Assassination Programs: Instituted through executive order by Obama giving him the right to assassinate American citizens.  Obama can now designate anyone an enemy combatant, detain them indefinitely without due process, or have them killed.

National Defense Resources Preparedness:  Obama’s executive order that gives him and the Department of Homeland Security the right to commandeer or confiscate public and private resources in the name of national security, and allows what essentially amounts to forced labor of U.S. citizens in the name of national good.  This is almost exactly the powers claimed by Lenin and the Bolsheviks that triggered the Tambov uprising.

Internment and Resettlement Operations:  A leaked secret Department of Defense document outlines plans to use the Department of Homeland Security and FEMA to “relocate” U.S. citizens and detainees to internment camps for processing, triggered by natural disasters, man-made disasters, terrorists attacks, or any thing they can use as a reason.

The recent block on the National Defense Authorization Act by the 4th District Court Judge Katherine Forrest was a glimmer of hope but the Obama administration has stated that her ruling is basically of no concern to them and they will continue to implement the NDAA as they see fit.

The Tambov Rebellion was an example of extreme defiance by a people crushed by a brutal Communist regime.  For the people of Russia it was a matter of survival.

In America we have the  right to defy intrusive laws through peaceful protest, a right to take our grievances to court, a right to vote out of office all those that pass or attempt to implement these oppressive, unconstitutional laws.

The horrors of governments gone rogue can be found throughout history as can the liberation of people through rebellion, in all of its forms.  It is as natural as the cycles of the Earth.  It reoccurs time and time again, sometimes suppressed, but not for long.

“If history teaches us anything, it teaches self-delusion in the face of unpleasant facts is folly.”   Ronald Reagan

← Palladium of Liberty: The Natural Right of Self Defense
Obama Commits Treason with Iran Deal; Institution of Gov’t Broken →