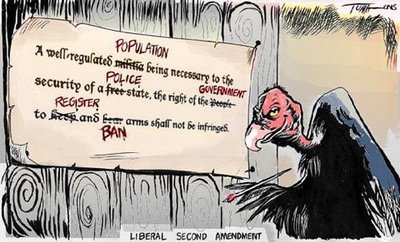 With the help of the United Nations, the world’s leftist regimes have been conspiring to deny people a means to defend their families and their liberty.

The Small Arms Treaty and the U.N.’s project on International Small Arms Control Standards seek to impose global restrictions on gun ownership that would apply to the citizens of every country that ratified the agreements.  As of March of this year, 82 nations have ratified or acceded to the treaty and another 50, including the US, have signed but not ratified it.  That will change if Hillary or Bernie become president or we lose the Senate to Democrats.

Our Founders understood this right to be essential to the defense of liberty.  It was a lesson they learned firsthand at the Battles of Lexington and Concord.  As David Hackett Fischer’s Paul Revere’s Ride recounts, in order to quench the beginnings of the American Revolution, British soldiers marched to confiscate gunpowder and other militia supplies, an act that they hoped would incapacitate the colonial rebels.  Thus, it was in defense of the right to bear arms as a means of securing the other liberties that the first battle of the American Revolution was fought.

As the Second Amendment implies, the right to bear arms isn’t given to us by the government and it isn’t just an American right.  It is a human right.  As a fundamental component of defense, the right to bear arms is intimately tied to those universal truths expressed in our Declaration of Independence  —  that all men have rights to life and liberty, with which they are endowed by their Creator.  And they have not just a right but a duty to throw off despotic government.

These truths are universal.  The Second Amendment is an amendment for all mankind.  Every person on the planet has the right to defend themselves from those who would oppress them, exploit them, or otherwise harm them.

Far fewer women would be raped, far fewer children would be murdered, far fewer towns would be destroyed, and far fewer dictators would survive if people everywhere on the planet had this God-given right to bear arms recognized.  When citizens have the power to defend themselves against a violent and tyrannical regime, governments think twice about trampling the lives and liberty of the people.

The United Nations has an extensive Declaration of Human Rights, including the right to join a labor union and the right to social services and security in the event of unemployment, sickness, disability, widowhood or old age.  However, nowhere does it provide for the right to keep and bear arms that in many places around the world is so critical to self-defense.  And, the Small Arms Treaty is a deliberate attempt to restrict these human rights.

I believe the United States should submit to the U.N. a treaty that extends the right to bear arms as a human right to every person on the planet.

It is critical, not just for those living under oppressive regimes, but for the many people who live in conditions in which the government cannot secure their safety.  From dangerous neighborhoods even here in the United States to lawless regions of the world run by gangs, warlords, and terrorists,  firearms are often the only means of personal security.  Only the ruling elite, or the wealthy, who’ve never had to live in a dangerous place or fear for their own lives, could be so confident that denying ordinary citizens the right to bear arms would make everyone safer.

It isn’t enough to watch people move from one dictatorship to another, nations lurching from disaster to disaster.  In submitting a treaty to the U.N. guaranteeing that right, America can represent its trust in the basic decency of millions of people around the world and our belief that the God-given rights in the Declaration of Independence apply to them, too.  We can let them know that if they had a government that recognized their inherent rights, a government that understood that they are citizens, not subjects, a government that understood it is government which is to be limited, not people, they too would have the chance to pursue happiness and live in safety.

That’s the message our president and secretary of state should be standing up for, not a document designed for the protection of dictators.

The 2016 election is important and every citizen must vote.  We are not only voting to keep our right to bear arms but to prevent the left from stacking the Supreme Court with left wingnuts that will forever change the concept that once was America.