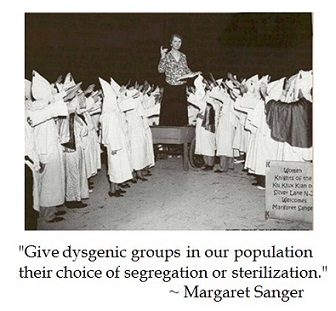 The transformation from open eugenics to population planning is described well by Germaine Greer who wrote that “It now seems strange that men who had been conspicuous in the eugenics movement were able to move quite painlessly into the population establishment at the highest level, but if we reflect that the paymasters were the same Ford, Mellon, Du Pont, Standard Oil, Rockefeller and Shell are still the same, we can only assume that people like Kingsley Davis, Frank W. Notestein, C. C. Little, E. A. Ross, the Osborns, Frederick and Fairfield, Philip M. Hauser, Alan Guttmacher and Sheldon Segal were being rewarded for past services.” That is, the population control movement was the same money, the same leaders, the same activities with a new excuse.”

During the 1960’s and 1970’s many influential Americans joined the drive to control population growth in the United States.  In love with China’s coercive one child policy, eugenicists and feminist leaders like Eleanor Smeal and Molly Yard pushed for a U.S. policy of the same movement.   When the Reagan administration stop United Nations Population Funding (UNFPA) after it openly supported the Chinese population program, two American organizations, the Rockefeller’s Population Council and the Population Institute in D.C. sued to restore funds.

Mary Calderone, one-time medical director of Planned Parenthood and founder of the Sex Information and Education Council of the United States, expressed concerns when she called for “family planning practice and contraceptive practices. . .in the service of population practice“, insisting that “control of population growth in. . .developed countries is crucial.”    In 1970 Planned Parenthood, the major recipient of family planning subsidies, published the Jaffe Memo, a list of suggestions for fertility reduction, similar to measures enforced by Chinese family planning officials:

Compulsory Sex Education in the classroom is a by-product of our government’s attempt to control America’s population.  In 1965, the Department of Health, Education and Welfare issued a report calling for sex education in our schools, because children must be made to perceive their “responsibilities” in the area of birth control.  Congressional hearings and numerous population assemblies were held throughout the country to stress the catastrophic nature of the population explosion.

The Department of Health touted its sex education projects to reduce fertility  particularly among minorities.  Lester Kirkendall, co-founder of Sex Information and Education Council, wrote that “sex education is. . .clearly tied. . .to family planning and population limitation and policy.”  He spoke candidly of the special treatment needed for “lower class families” because of their “ineffective” contraceptive practices.  Planned Parenthood, a by-product of Margaret Sanger’s war on blacks, and a leading promoter of the government’s population control program even called for a “zero rate of natural population increase” hand in hand with the requisite sex education  to “raise the level of awareness among all persons. . .”  By 977 Sanger’s Planned Parenthood had linked efforts with  Zero Population Growth to hammer out a detailed proposal for massive federal grants to finance “fertility control especially in minority communities, that cost taxpayers by the mid 1990s more than $1 million a year.

Since its Socialist inception, the United Nations has advanced a world-wide program of population control and Darwinism by encouraging abortion, forced sterilization and control over human reproduction.  They regard two-thirds of the human population as excess baggage.  “The present vast overpopulation, now far beyond the world carrying capacity, cannot be answered by future reductions in the birth rate due to contraception, sterilization and abortion, but must be met in the present by the reduction of numbers presently existing.  This must be done by whatever means necessary.”   Initiative for ECO-92, Earth Charter

“Those least fit to carry on the race are increasing most rapidly. . .Funds that should be used to raise the standard of our civilization are diverted to maintenance of those who should never has been born.”    Margaret Sanger, founded of Planned Parenthood

“Childbearing [should be] a punishable crime against society, unless the parents hold a government license. . .All potential parents [should be] required to use contraceptive chemicals, the government issuing antidotes to citizens chose for childbearing.”  David Brower, Ex. Director, the Sierra Club

“Out of the full spectrum of human personality, one-fourth is electing to transcend.  One-fourth is resistant to election. They are  un-attracted by life ever-evolving.  Now, as we approach the quantum shift from creature-human to co-creative human the destructive one-fourth must be eliminated from the social body.  Fortunately you, dearly beloveds, are not responsible for this act.  We are.  We are in charge of God’s selection process for planet Earth.  He selects, we destroy.  We are the riders of the pale horse – Death.”  Barbara Marx Hubbard, former Democratic vice-presidential candidate, occult leader and former advisor to the Department of Defense, in her book “The Book of Co-Creation”, 1980