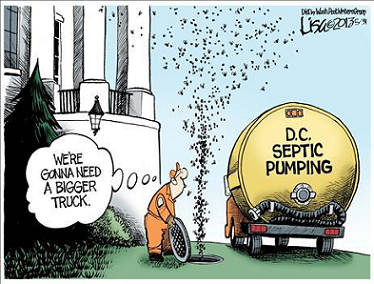 When is a cap on worker visas not a cap?  When corporations can bribe the ruling elite to pretend it doesn’t exist!

Nine Members of the House of Representatives [7 Rep., 2 Dems.] headed by Representative Bill Long, R-MO,  sent a letter to key Members of the House Appropriations Committee, urging them to expand the H-2B low-skilled, guest worker program which would potentially quadruple the number of H-2B visas granted to foreign workers each year from 66,000 to 264,000. A similar provision was included in the FY2016 omnibus spending bill passed in December of last year, but the expansion will expire at the end of September if not renewed.

Employers love the H-2B program because visa holders are tied to the company, which prevents many from complaining or unionizing when mistreated. Preferring foreign workers over American workers who are supposed to be given first crack at the job, companies, in a variety of industries,  have made it all but impossible for U.S. workers to learn about job openings.  Even when American workers do find out, they are discouraged from applying. And if, against all odds, Americans actually get hired, they often are treated worse and paid less than foreign workers doing the same job, in order to drive them to quit.

The H-2B visa program was designed to import temporary, seasonal, non-agricultural guest workers to fill a void in jobs associated with low-skill labor jobs such as landscaping, forestry, hotels, seafood processing, restaurants, amusement parks, and construction,  etc., jobs which normally are filled by America’s most vulnerable –  single women, the disabled, the elderly, minorities, teenagers, students, and first-generation immigrants.   Unfortunately, as is the case in most government programs, corporations have bribed their way around provisions in the law capping the number of foreign workers they can “import,” so they do not have to hire American workers.

In 2008, the Center for Immigration Studies (CIS) found that Senator Barbara A. Mikulski, Democratic Vice Chair of the Committee on Appropriations and a long-time champion of bringing foreign workers into the U.S. to replace American workers, received tens of thousands of dollars in campaign contributions from the biggest users of the program.  No conflict of interest there!

According to the CIS, most H-2B employers are not small nor seasonal employers. In fact, the majority are mid to large companies and recruiters who petition for the H-2Bs so they can hire employees to work in the U.S. for ten months out of the year, year after year, after year, to benefit their bottom line, all at the expense of American workers.

Provisions in the FY2016 Consolidated Appropriations Act  which now  is before the Committee on Appropriations, [on which Mikulski sits] contains a provision to make permanent the exemption from the annual cap of 66,000 for any alien worker who had held a H2-B visa  for three previous years.  In other words, they would not be counted in the number of foreign workers connected to this program.  That is just another example of how Congress attempts to placate American workers while helping their biggest donors get around the law.  Senator Jeff Sessions recently sent a letter to the committee asking them to reject any provision in appropriations legislation that would increase the number of H-2B low-skilled guest workers.

The Bureau of Labor Statistics reports that of the 92.9 million of Americans not participating in the work force, there is a disproportionate number who do not have a high school diploma. As a matter of fact, official unemployment rates for Americans without a diploma are nearly twice as high as for other Americans. In light of this, it is clear that increasing the number of low-skill, seasonal, foreign workers (H-2B workers) will most profoundly harm our most vulnerable workers.  Not that Congress cares.  But we can make them care.

They may not be able to flip a switch to correct all the damage they have inflected on our  Blue collar workers but we can ensure that they no longer get away with inflicting  further harm by lying about the number of foreign workers they import.

Call or write your representatives and demand that they oppose any increase to the H2-B low-skill worker visa program.