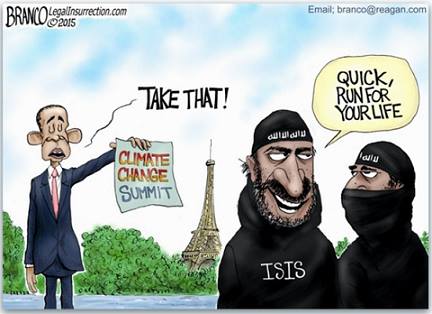 It’s official! The left has turned global warming into a comedy show. John Kerry  claims that climate change is a weapon of mass destruction, while Obama uses it to cover for Islamic terrorism. Claims have long passed the point of reality.

Throughout our planet’s history climate change has ranged from regional to hemispheric, from beneficial to harmful to destructive. It has included Roman and medieval warm periods, little ice ages, and five “mammoth” glacial epochs that buried continents under mile-high walls of ice. Natural climate change inflicted a Dust Bowl that sent millions of Americans scurrying in search of better lives, and decades-or centuries-long droughts that brought entire civilizations to their knees. Roman, Mayan, Mesopotamian, Egyptian, Chinese and other cities and cultures prospered in warm periods and collapsed in cold and drought eras, according to climate historian Dennis Avery. This happened “over and over, in a centuries-long rhythm of affluence followed by long success, followed by long and utter failure.” Entire cities in the eastern Mediterranean were abandoned for centuries.

Storm activity rose by 85% in the second half of the 16th century, during the Maunder Sunspot Minimum, while the incidence of severe storms increased four-fold, writes historian Brian Fagan. British Navy logbooks show more than twice as many major landed Caribbean hurricanes during the cold decades of the 1700’s as during the warm years of 1950–2000.   Little ice ages and extended droughts brought crop failures and mass starvation.  Rome shrank from a million inhabitants in its heyday to barely 30,000 a century later. The Mayan civilization plunged from perhaps 15 million to one million, as its cities were abandoned in a century-long drought.

Climate mood swings in the past 50 years have been far less dramatic than in previous millennia. Few people will have to flee the tiny portion of future climate change that might be attributable to humans. Oceans have risen 400 feet since the last ice age glaciers melted.  Pacific islands rose with them, as corals expanded their habitats with every new inch of sea water. Seas are now rising at seven inches per century . [Note that the EPA’s anti-coal Clean Power Plan would prevent barely 0.01 inches of rise over the next 100 years.]

Greenland’s icecap is shrinking because of subterranean magmatic activity, not global warming. Arctic regions have long experienced warming and cooling cycles, as recorded by Francis McClintock and other whalers and explorers, dating back some 300 years. Polar bear populations are at an all-time high, and Antarctic ice masses continue to grow.  The continent’s average annual temperature of minus-55 F means it would have to warm by 88 degrees year-round for that ice to melt.  Even Al Gore in his wildest rants doesn’t say that temperatures would rise that much.  And it’s obvious he doesn’t really believe his idiotic claims of the ocean rising by 20 foot since he purchased a beachfront home.

Meteorologist Anthony Watts concludes that the only reliable long-term surface record comes from 400 official US rural thermometer stations that were never corrupted by location changes, airport heat or urban growth. Those stations show no significant warming for the past 80 years. The “record warming” we keep hearing about comes from data that have been “adjusted” or “homogenized” (i.e. manipulated) upward to conform to computer model projections, IPCC proclamations and White House press releases.

The notion that a warmer world with more atmospheric CO2 will bring crop failures and famines is sheer delusion. Higher CO2 levels are actually “greening” the planet and making crops, forests and grasslands grow faster. New hybrid and biotech seeds, combined with modern fertilizers and farming practices, are yielding bigger harvests, even during droughts, as India is proving right now. There is no manmade climate crisis. Solar, galactic and oceanic cycles rule – not carbon dioxide. The biggest threat to agriculture and humans would come from another little ice age, not moderate warming.

In reality, the enormous amounts of energy packed into coal, oil, natural gas and nuclear fuels create the wealth, and power the wondrous technologies, that give us the greatest advantages mankind has ever enjoyed – to survive, adapt to and deal with climate changes and weather events. The worst thing we could do is lock up that reliable, affordable, compact energy – and switch to expensive, heavily subsidized, wildly unpredictable wind and solar energy … and to biofuels that require millions of acres of land and billions of gallons of precious water.

At the rate of one degree per century, global warning can barely be measured, to say nothing of being noticed, especially since temperatures in our neighborhoods go up an down 50 to 60 degrees every six months, and about 20 degrees every 12 hours.  One degree per century is inconsequential and certainly not enough to cause all the things that are currently blamed on global warming.

Remember, those that control energy control lives, livelihoods and living standards.  Allowing these left-wing nuts to dictate what energy sources we can use, and how much each of us is “permitted” to have, would put all of us at the mercy of their unaccountable whims, ideologies and fraudulent science.  Their callous policies will kill millions in impoverished nations by depriving them of energy and technology we take for granted.