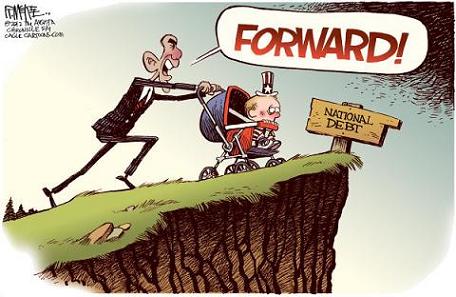 Let’s face it, Western democracies worked well for many years.   They were remarkably prosperous and  peaceful, but, all good things must come to an end and in the end,  we are are victims of  our own success.

Out of rational self-interest, the realities of electoral politics, and a strong sense of justice – misguided or otherwise – the welfare state and the payment of entitlements have been expanding. The self-imposed burdens have reached and exceeded, the limit of what these societies could finance.

The  problem has been highlighted by an economic recession but the problem is  not the product of that business contraction.  Things have been made worse by the fact that most governments in power have tried to apply the very same  old policies that were making societies ill in the first place.  The situation is akin to the medical practice of centuries ago in which an already  sick person was bled further by the application of leeches, which usually resulted in  death for the patient.

Governments buried in the equivalent of “old-think” economics have few alternatives but to deny that any of this is happening and attempt to convince voters that every penny spent is absolutely necessary to stop old people from starving, women from keeling over in their 30s, the globe from heating up like a tea kettle, and, in short, the mass extinction of the human race; or go on the defensive  by calling anyone who recognizes the reality of our situation  a violent Nazi hater of women and a racist flat-earther, who wants to destroy Social Security and Medicare; or, use one segment of the populace against another  —  If only taxes were raised on the rich greedy people, then the party could go on uninterrupted with the wealthy paying the caterer.

And, they are abetted by people who just  don’t want to be told to sacrifice, especially because they suspect that the elite, the very people they believe is responsible for the mess we’re in, don’t have to sacrifice.  The scary part is that it is in the hands of enraged, uninformed voters to decide whether we must face the music or default on paying the fiddler.  Is it even possible to make voters understand the situation, what is really at stake and what must be done to save ourselves?

Is it possible that a government which has grown steadily for so many decades might have become too big?  Is it conceivable that regulations imposed by the thousands have become too onerous?  Is it within the realm of the real world that the burden of salaries and retirements for those who draw government paychecks have become too heavy? Might it be that if you keep dividing society into warring groups they will eventually go to war against each other?

Or is this all a fantasy of a reactionary, evil, woman-hating racist mindset that should be dismissed by any civilized being?

When you pull a rubber band far enough it is either going to snap back or break! Our Republic was based on the idea that the average citizen was wise enough to understand what we must do as individuals and as a country to survive.  Look around you – that no longer seems to be the case.

Read “Western Civilization Faces the Big Test: Citizens Heal Your Societies or Go Over the Cliff” by Barry Rubin, at this link.

← Is Islam a Religion of Peace
Crazy Violent Left-Wing Extremists →