“We shall sodomize your sons, emblems of your feeble masculinity, of your shallow dreams and vulgar lies.  We shall seduce them in your schools, in your dormitories. . .in your seminaries, in your youth groups. . .in your houses of Congress. . .”   1987 Gay Manifesto

B4U-ACT is a 501(c)(3) advocacy organization between professional mental health and pedophiles “to promote understanding between the two groups and give them hope for productive fulfilling lives.”  On their website you will not see the term pedophile used – it is apparently  less threatening to use the Politically Correct term  “minor attracted adults.”

The organization was started by Mike Melsheimer (now deceased), a self-avowed pedophilia who prefers the term boy lover, and convicted child molester, first caught in 1984 when he was director of the Pennsylvania YMCA.    Melsheimer  posted on the website that: “I am a BL without regret and will always be a BL without regret.  My life as a BL has been terrific. . .even considering that I spent time in prison.”   His therapist, Dr. Fred Berlin,  as it turns out, is an advocate against sex offender laws and was the “expert” the Catholic Church relied on for advice on how to deal with pedophile priests.  In a 2008 deposition by Archbishop Emeritus Rembert Weakland, it was revealed that Berlin counseled the Church to not defrock pedophile priests.

Dr. Berlin wrote in a 2006 Forbes article that  “we’ve basically dehumanized these people with words such as ‘predator’.  Every decent human being wants to protect children, but even suggesting that criminals who have done their time are entitled to rebuild their lives can tarnish a politician.  It’s close to heresy.”   It is easy to see where Dr. Berlin’s sympathy lies –  and it is not with the molested child.  Dr. Berlin is the founder of the National Institute for the Study, Prevention and Treatment of Sexual Trauma at John Hopkins Sexual Disorders Clinic.

The push to normalize pedophilia   has  gain momentum since  the American Psychiatric Association (APA)  changed its Diagnostic and Statistics Manual (DSM) of Sexual Disorders  to read that a person no longer has a mental disorder simply because he molested children 13 years and younger. The APA has been adamant for years that sexual relations with a 14-year-old is not pedophilia.

According to the APA diagnostic manual, if an adult does not feel anxious about “having a relationship with a child”  or is not “impaired in his work or social relationships, he is not a pedophile.” Using the same logic, a rapist or a murderer isn’t really a bad person either, as long as they don’t feel remorse about their evil deeds.

When did we become so ungodly that molesting a child can be equated with sexual intimacy?  The Rind Study by Temple University of Pennsylvania will definitely turn your stomach.  The study actually stated that pedophilia can have a positive influence on a child and concluded that society must “eliminate the use of judgmental terms like child abuse, molestation, and victims” and “use neutral, value-free terms like adult-child sex.”  We must not discuss the severity of the abuse but rather “refer to the level of sexual intimacy.”   It was pretty much the same argument used by Margo Kaplan, an assistant professor at Rutgers School of Law, Camden, who in an article published at the New York Times, claimed that pedophilia is a disability, not a crime, and as such was deserving of protection under the Americans with Disability Act.

In 1999, The Boston Phoenix, a leading advocate of pedophilia in Massachusetts, decided that any concern we may feel with the need to  “protect” our children from pedophiles  is  “gay-bashing” – nothing more than then the continuation of “ongoing attacks on gay people and gay rights” using the ‘protection of children’ as a cover for homophobia. “Children are empowered and have autonomy when they have the ability to have sex with adults.  Gay-bashing under the guise of child protection will never go away until we as a culture can discuss the lives and needs of children openly and honestly and include recognition of their sexuality, freedom, and autonomy.”

In a sort of “No Law- No Problem” approach to child molestation, all speakers at a past B4U-ACT Normalizing Pedophilia conference  focused on pedophiles as healthy, normal and unfairly victimized by stigma, followed by repeated assertions that pedophiles “never force children” and are gentle and loving.  Some even suggested that pedophiles should have a voice into decisions about how pedophilia is defined.

Dr. Edward Brongersma in So, Are We Pedophiles? writes that child lovers have to take advantage of their knowledge of the enemy and use the term pedophiles when we want to announce our preference. In an interview published in the Journal of Homosexuality, he accuses researchers who “dare to challenge the notion that pedophiles are normal” cannot be objective because they “fear their own pedophile impulses.”  He even goes so far as to cite examples where social workers achieved “miracles with incorrigible young delinquents by sleeping with them,” because “loving pedophiles offer a child companionship, security and protection.”  Parents, he says should look upon the pedophile “not as a rival or competitor, not as a thief of their property, but as a partner in the boy’s upbringing, someone to welcome into their homes.”

The Harvard Gay & Lesbian Review published an interview with Allen Ginsberg, a card-carrying member of NAMBLA [North American Man/Boy Love Association, shortly before his death.  Ginsberg,  a pedophile in his own right,  often  portrayed himself as more  of “a paedophile who dug older teenagers than a corrupter of ‘wee’ children.”  In the interview, Ginsberg is quoted as saying “like the whole labeling of pedophiles as child molesters – everybody likes little kids.  All you have to do is walk through the Vatican and see the little statutes of  little prepubescents, pubescents and postpubescents.  Naked kids have been a staple of delight for centuries, for both parents and onlookers. So to label pedophilia as criminal is ridiculous.”

In 2001 Mary Eberstadt wrote “Pedophilia Chic: Reconsidered” for the Weekly Standard.  She is quoted as saying “the reason why the public is being urged to reconsider pedophilia is that this question, settled thought it may be in the opinions and laws of the rest of the country, is demonstrably not yet settled within certain parts of the gay rights movement,”  noting that as the homosexual movement becomes more mainstream this “question about adult/child sex” will become more prominent.   “Homosexuals who desire sex with children will do exactly what the ACLU is doing in Kansas, destroying all laws banning sex between adults and children.”

Elberstadt was referring to the ACLU lawsuit against Kansas  over the state’s criminal sodomy law involving children.  The ACLU defended  a homosexual who committed sodomy with a 14-year-old boy, claiming that his conviction was unconstitutionally discriminatory because penalties for sodomy with minors were different from heterosexual sex with a minor.

Today, you can now log on to Amazon.com and purchase a book called The Pedophile’s Guide to Love and Pleasure: A Child lover’s Code of Conduct by Philip R. Greaves, II.   Graves said it was his attempt to establish certain rules for the pedophile’s to follow with the hope that it will result in ‘less hatred’ and perhaps lighter sentences should they be caught.

There has been an organization in play within the pedophilia and pederasty movement for years attempting to destigmatize pedophilia.  The North American Man/Boy Love Association (NAMBLA) has been actively working for years to  abolish the age of consent laws criminalizing adult sexual involvement with minors and for the release of  all men who have been jailed for sexual contacts with minors that did not involve coercion.  Of course, coercion to NAMBLA and coercion to normal-sane-rational human beings is two different things.

The push to normalize Pedophilia is not limited just to America.  Dr. Salih bin Fawzan, a prominent cleric and member of Saudi Arabia’s highest religious council issued a fatwa asserting that there is no minimum 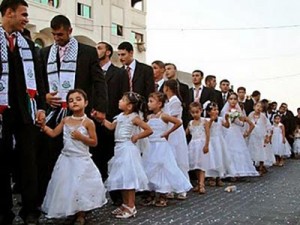 age for marriage and that girls can be married “even if they are in the cradle.”    Fawzan insists that Sharia law does not set an age limit for marrying girls and relies on the Koran 65:4 which discusses marriage to females who have not yet begun menstruating and the fact that Muhammad was married to a 6-year-old, consummating the marriage when she was 9.    “The ulema [Islam’s interpreters] have agreed that it is permissible for fathers to marry off their small daughters, even if they are in the cradle.  But it is not permissible for their husbands to have sex with them unless they are capable of being placed beneath and bearing the weight of the man.  And their capability in this regard varies based on their nature and capacity. .  .”

In a  Canadian parliamentary session discussion on a bill relating to sexual offenses against children, two “expert” witnesses were called, both of which pushed pedophilia as a ‘sexual orientation’ rather than a crime.   Sweden, which has laws against pedophilia, apparently has accepted this “sexual orientation” approach and has decided to teach their preschoolers and first grade students how to become victims.  These innocents are now given a  “sex box” containing fabric modes of human genitalia  to teach them that ‘contacting body parts can be pleasurable.’  The teaching aid recommends that children ‘massage’ each other or rub themselves with warm sand bags, accompanied by soft music. “Children should be encouraged to develop and experience their sexuality in a pleasurable way.”

Parents beware.  Pedophiles have long existed as a subculture within the gay rights movement.  By normalizing and accepting homosexual marriage and adoption, by abandoning Christian values and morals that hold our families together, we find ourselves on a slippery slope to acceptance of total perversion.

Culture has always been rife with evil and what could be more evil than people advocating for the exploitation of innocent children.  If the sexual abuse of minor’s isn’t wrong – what is?

← The Donald: What Bill Whittle Loves About Donald Trump…
Got Law? How Hillary Clinton’s Lawlessness Gets Ignored… →