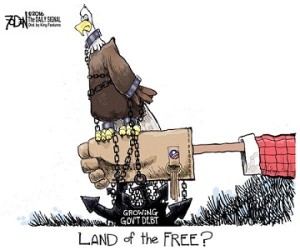 The latest lie from the U.S. government is the “new” official inflation rate of 1%.  Wouldn’t it be nice if that were true? Of course, when you live in the real world you know better.

The CPI is tied to the income of about 80 million consumers, specifically those who receive Social Security benefits, food stamp recipients, military and federal civil service retirees and survivors and children on the numerous school lunch programs. The higher the CPI the more money the government must spend on these income payments to keep pace with the cost of living so when your deficit is $19 trillion and counting, it is in your best interest to fudge the numbers.

Of course the government has more than a few resources and years of experience to manipulate the CPI. First and foremost, the Bureau of Labor Statistics operates under a veil of secrecy, meaning that the raw data used to calculate the CPI is not available to the public. Secondly, over the last 30 years the government has changed the way it calculates inflation more than 20 times, all of which is said make the figures “more accurate.” Wink, wink!

The grim reality – real inflation is around 7% per year. Unbiased private sector efforts to calculate the real rate of inflation have yielded a rate of around 7% to 13% a year, depending on where you live.

So why does the government feel the need to lie, other than that’s what politicians do best? What would happen if the true rate of inflation were used?

First and foremost those on Social Security would demand an increase in their monthly check, sending that pretend “trust fund” well into the red. While the government would have you believe that we have at least a few years before that faux trust fund goes bust, the truth is the government has to borrow every dollar of deficit spending by Social Security by selling more Treasury bonds, just as it borrows every other dollar of deficit spending.

Global investors would start demanding yields on those Treasury bonds above the real rate of inflation.  If inflation is running at 7%, then bond buyers would need to earn 8% per year just to earn a modest return. If the government had to come up with 8% to roll over maturing government bonds, the cost of servicing the existing debt, never mind the cost of borrowing an additional $400 billion or more every year, would skyrocket, squeezing out all other government spending and triggering massive deficits just to pay the ballooning interest on existing debt.

While banks would be forced to pay decent interest rates on private savings, the cost of borrowing would soar.  Anyone in the market for a 8% plus interest rate?  How about a new car loan?

Any serious decline in private and state borrowing would implode the entire system. Remember when just a modest drop in new borrowing very nearly collapsed the global financial system in 2008-09.  The entire system depends on a permanently monstrous expansion of new borrowing to fund consumption, student loans, taxes, etc.

How many billions of dollars will be siphoned off the debt-serfs, oops, students, should student loans be issued at interest rates north of 8%? Some private student loans are already in the range of 8% so where will those go if inflation is recognized as running at 7% per year?

The grim reality is that real inflation must be hidden behind bogus official calculations so that the reality of our situation will not collapse the entire status quo.   While the wealthy elite aren’t particularly bothered by the bogus CPI, everyone whose income has stagnated and everyone who depends on wages rather than assets to get by, in other words, the bottom 99% are being screwed. But then again, what else is new?

← Thousands of Experts Say 911 Was CONTROLLED DEMOLITION!
To Whom is Your Conscience Guiding You? →