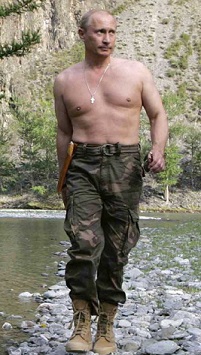 Vladimir Putin, that want-a-be sex symbol from Russia has been pulling the wool over many Western eyes as he poses as the champion of nationalism, of human rights and Christianity. But surely Western conservatives could find a more worthy champion than this “former” KGB agent who publicly pines for the supranational Soviet Union, presides over a society replete with social ills and never misses an opportunity to promote Russia as an Asian power.

Take off the rose colored glasses. Putin, a career apparatchik in the Communist Party, was a 16 year loyal agent of the Soviet Secret Police, the KGB, and is now head of its successor, the FSB. As a KGB agent Putin was indoctrinated to see only Russia’s greatness in the sense of it being a great empire, in the sense that it would always come ahead of democratic institutions, individual freedom, religious freedom and human rights. In other words, for a hardline Communist and KGB agent, democratic policies are words on paper, a means to an end, nothing more.

Putin himself pushes the idea that he is a Christian, the defender and protector of Christianity and morality. However, before bestowing Defender of the Faith accolades on Vladimir the Pious, we would do well to look behind the mask.  As a creature of the KGB, a truly diabolical organization that stood for murder and terror, a tool for the Communist Party’s brutal suppression of any form of religious expression, that persecuted Christians by denying them jobs and education, that imprisoned and tortured them in unspeakable ways, who desecrated and demolished church buildings, monasteries, convents and schools and slaughtered millions of Christians, Putin is only hiding behind a façade.

Partnering with the Russian Orthodox Church has been good for Putin’s image. Not only does the Church push the propaganda that even his family “comes from the Church,” they cooperate with Putin in pushing Russia’s culture abroad and in helping Putin boost his leverage on the global stage. The glue that binds the Church to Putin is the shared sacralized vision of Russia’s national identity and exceptionalism, along with the idea that their vision is divinely inspired. Anti-Americanism is an important part of that vision.The Russian Orthodox Church has made Putin a quasi-sacral figure, especially in his hometown of St. Petersburg where he has been portrayed as an angel reaching out his hand to bless the inhabitants. There is also a bust of Putin represented as a Roman Emperor. Sects within the Church revere him as the reincarnation of the Apostle Paul and even pray to him.

Putin, on the other hand, sees his partnership with the Church as a key factor in shaping the increasingly authoritarian bent of his government and strengthening his public support. Just like Stalin, tying the Russian Orthodox Church to a larger nationalist narrative allows him to shift the balance of power from self-determinist movements to himself while bolstering the Church’s credentials as protector of the greater Russian heritage. Their close relationship has not only led to diminishing the influence of alternative religious groups but has marked the beginning of a trend of increased restrictions on citizenship rights and the slow death of Russia’s fledgling democracy.

Recently Putin went full Soviet on religious freedom by signing into law a measure that was pushed as a means to suppress terrorism and extremism. With just a stroke of the pen, he managed to removed religion from the public square and give his government the right to decide what is and isn’t an acceptable religion.  The new law forbids evangelical Christians from sharing their faith without first securing a “permit” from the government, and even then they are denied the right to testify or preach outside of a “registered” church or religious site. Besides rendering evangelism illegal, the law eliminates all Churches that rent rather than own their facilities and promises to “punish” individuals and organizations that do not report an offense to the government [FSB, the current Secret Police].

Putin has been responsible for the murder of Russian citizens through a number of FSB run “Chechen terrorist attacks” used to whip up public support for his invasion of Chechnya.  Along with the invasion, he destroyed the countryside with his bombs and murdered many civilians, including women and children, deaths which independent estimates put between 25,000 to 200,000.

He has appointed more former KGB/FSB agents to government positions than any of his predecessors, including Stalin, restored a bust of Felix Dzerzhinsky at the notorious KGB headquarters and attempted to restore a giant statue of him to its former place of honor in Moscow’s Lubyanka Square. Dzerzhinsky’s is best known to Westerners for his quote “We stand for organized terror.” In addition, Putin has ordered the murder of Russian journalists, whistleblowers and dissidents, brave men and women who challenged his corrupt dictatorship.

Don’t be taken in – Putin’s “conversion” fits a global pattern of Marxist-Leninists who are using religion to advance the same communist objectives.

← To Whom is Your Conscience Guiding You?
Russian’s Electronic Warfare Weapon →