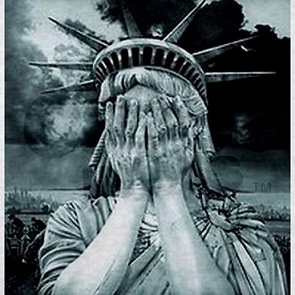 Close your eyes for a moment and imagine, if you will, that the US were to abandon all of the sacred principles that its people once considered inviolable. Imagine that, instead of being bound by laws, judges and juries, the government was free to punish you based on nothing more than its own suspicions. Imagine that, instead of following the Constitution, agents of the state could merely write your name on a list and declare your rights forfeit. Imagine that, for daring to oppose this arrangement,, you were publicly accused of siding with terrorist. And finally, imagine that the president of the US, the attorney general, the director of Homeland Security and almost half of all federal legislators were happy to acquiesce to the plan.

Now open your eyes and prepare for a nasty shock. If our government is left to its own devices, this is exactly what is going to happen. The plan? NO FLY, NO BUY!

In the aftermath of the Orlando terrorist attack, Obama called on Congress to reinstate the assault weapons ban as well as pass legislation to make it harder for suspected terrorists to obtain firearms. According to our leftist ruler-in-chief, there are a number of “common sense” gun control measures that Congress should take to reduce violence without violating the Second Amendment.

Unable to push through any of Obama’s gun control regulations, Senator Susan Collins, a Republican from Maine joined hands with Senator Heidi Heitkamp, a Democrat from North Dakota, and Senator Tim Kaine, Hillary’s running mate, with a proposal to narrow the new gun control effort to suspected terrorists who appear on the “no-fly” list or its “selectee” list that requires more rigorous security checks to fly. These lists contain a total of approximately 109,000 people, of which only 2,700 are American citizens, and is much smaller than Obama, Dirty Harry Reid or Senator Feinstein’s demand of using the federal terrorist screening database which includes about one million names.

According to the ACLU, there are more than 800,000 names on the terrorist watch list, the vast majority of which are either there by accident or are linked to no terror investigations whatsoever, some as young as age two.

Since the time of the Magna Carta, free people have insisted that their government possess no power to strip them of their liberties without recourse to due process. “No free man,” that document holds, “shall be seized or imprisoned, or stripped of his rights or possessions, or outlawed or exiled, or deprived of his standing in any other way, nor will we proceed with force against him, or send others to do so, except by the lawful judgment of his equals or by the law of the land.”

The Fifth Amendment is equally blunt. “No person shall be held to answer for a capital or otherwise infamous crime, unless on a presentment or indictment of a Grand Jury, …nor be deprived of life, liberty, or property, without due process of law…”

There is no wiggle room in the text. Clear as day, the amendment says “No person,” not “Some people;” it stipulates “due process of law,” not “secret FBI lists;” and it protects “life, liberty, or property” as determined by the Constitution’s text.

No Fly, No Buy? What nonsense. No due process, no Republic.

Source: When the Death of Justice Comes, It Will Look Like A Terror Watch List, by Charles C.W. Cooke, America’s Freedom First, September issue