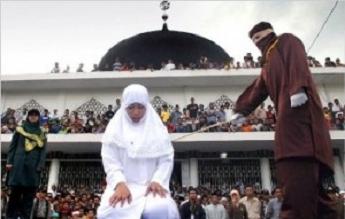 The Organization of Islamic Cooperation (OIC) launched a satellite television channel “OIC” to counter Islamophobia, the prejudice against and the “irrational fear of Islam or Muslims.  That should be really interesting.   Why would anyone in America fear Sariah law or jihad?  After all, doesn’t Islam promote itself as  a religion of peace and tolerance?

Ayatollah Abdollar Javadi-Amoli, an Islamic scholar in Iran says that homosexuals are lower than animals.  “If a society commits a new sin, it will face punishment.  Problems like Aids did not exist before.  Even animals — dogs and pigs don’t engage in this disgusting act but yet they [western politicians] pass laws in favor of them in their parliaments.”

Homosexuality is punishable by death according to fatwas issued by almost all Iranian clerics and until recently, sodomy was punishable by death for all individuals involved in consensual sexual intercourse.  But the Iranian parliament has changed that death sentence just a little.  Now, a person who plays an active roll will only be flogged 100 times if the sex was consensual and he is single but the partner who played a passive role will still be put to death regardless of his martial status.

And it isn’t just homosexuals they dispatch.   In the Islamic world,  women are considered nothing more than property and honor killings are common.

Muslims commit 91% of honor killings worldwide.  A manual of Islamic law certified as a reliable guide to Sunni orthodoxy by Al-Azhar University, says that “retaliation is obligatory against anyone who kills a human being purely intentionally and without right.  However, “not subject to retaliation is a father or mother [or their fathers and mothers]  for killing their offspring, or offspring’s offspring.”

Honor killings differ from homicides, serial killings, crimes of passion, revenue killings and domestic violence.  Their motivation is based on the codes of morality and behavior of their cultures, often reinforced by fundamentalist religious dictates.

In 2000, the United Nations estimated that there were 5,000 honor killings every year but the worldwide numbers are much greater.  Most honor killings are not classified as such and are rarely prosecuted or when prosecuted in the Muslim world, result in relatively light sentences.

In a study by Phyllis Chesler, emerita professor of psychology and women’s studies at the Richmond College of the City University of New York, findings indicated that honor killings accelerated significantly between 1989 and 2009, but she  conceded that the number may have increased due to killings being more accurately reported and prosecuted, especially in the West.   The worldwide average age of victims is 23.  Over half of these victims were daughters and sisters, with about one-quarter wives and girlfriends.  The balance included mothers, aunts, nieces, cousins, an occasional uncle or non-relatives.

Honor killings are a family collaborative.  World-wide, two-thirds of the victims were murdered by their families, with fathers playing an active role in over one-third of the murders. Fathers were most involved in North America and least involved in the Muslim world, while in Europe, fathers were involved in more than one-third.

Worldwide more than half of the victims were tortured and died a slow agonizing death.  58% of the victims were murdered for being “too Western” and/or resisting or disobeying cultural and religious expectation.   Being “too western” involved being too independent, not subservient enough, refusing to wear varieties of Islamic clothing, wanting an advanced education and a career or having non-Muslim boyfriends.

Less than half of the victims worldwide were murdered for committing an alleged sexual impropriety such as having been raped, having an extra-marital affair, or viewed as promiscuous.

Many western feminists and advocates for victims of domestic violence confuse western domestic violence  with the honor killings of victims.  Representatives of Islamist pressure groups such as Council on American-Islamic Relations (CAIR) and the Canadian Islamic Congress, Islamic religious leaders, etc. insist that honor killings either do not exist or have nothing to do with Islam; that they are cultural, tribal, pre-Islamic customs and that domestic violence exists everywhere.

Although Sikhs and Hindus do sometimes commit such murders, honor killings, both worldwide and in the West, are mainly Muslim-on-Muslim crimes.  Worldwide 91% of perpetrators were Muslims.  In North America 84% were Muslims and in Europe 96% were Muslims.

The Palestinian Authority gives pardons or suspended sentences for honor murders.  Iraqi women have asked for tougher sentences for those that commit honor murders.  In 2009 Syria scrapped a law limiting the length of sentences for honor killings and wrote a new law that says a man can still benefit from extenuating circumstances in crimes of passion or honor provided he serves a prison term of no less than 2 years.  In 2003 the Jordanian Parliament voted down, on Islamic grounds, a provision designed to stiffen penalties for honor killings  because Islamists and conservatives said “the law would violate religious traditions and destroy families and values.”

Islamic gender apartheid is a human rights violation and cannot be justified in the name of cultural relativism, tolerance, anti-racism, diversity, or political correctness.  As long as Islamists groups continue to deny, minimize, or obfuscate the problem, and governments and police officials accept their inaccurate versions of reality, women will continue to be murdered in the name of  honor.