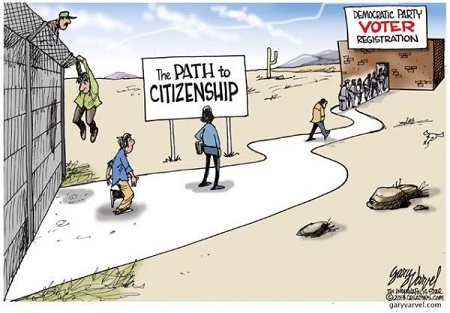 The Left is conducting a war against our Republic with fanatical determination.

Reprehensive as it may be, Obama’s left-wing agenda  actually serves the Democratic Party’s political objectives of changing our country’s demographic with an emphasis on open borders, relaxed or nonexistent immigration laws, and enticements of welfare benefits, free health care, free education and eventual citizenship just for voting Democrat.

Since 9/11 the US has accepted more than two million immigrants and refugees from Muslim nations.  In addition, there are an estimated twenty to forty million illegal aliens in our country, 2.5 million of which have crossed our unprotected border since 2013.

Any notion of closing the border or restricting Muslims’ flow into this country will be met with fierce opposition by Democrats and RINOs who, are perfectly willing to trade our national security and the lives of American citizens for votes.   They are more than willing to promote resentment instead of assimilation, to polarization instead of unification, to ultimately destroy the fabric of our nation, all in the cause of the global community. This is a vision of CHANGE that Obama and Hillary can live with.

In early 2000 Fredo Arias-King, as representative of then president Vincente Fox of Mexico, meet with about eighty Democratic and Republican Congressmen to discuss an open border with Mexico. According to reports leaked from the meeting, our questionable representatives said that they support New Americans over existing U.S. citizens because they would be much more open to government programs, would help dismantle the restrictive U.S. Constitution and keep the ruling elite in power.

In 2015 Democratic Senator Pat Leahy proposed, in the Senate Judiciary Committee, an amendment to Title 18 of the U.S. Code, for the “global” right of foreigners to immigrate to the U.S. It actually passed the Judiciary Committee on a 16-4 vote. While the media attempted to portray it as nothing more than a symbolic slap to Donald Trump’s talk about vetting Muslims, in fact, the amendment created a dangerous precedent that if ever given legal effect would allow any foreign national, whether criminal, terrorists, etc. to just move in.

Thanks to just released emails and videos we discovered that in 2013 Hillary Clinton said her “dream is a hemispheric common market with open trade and open borders…” Something she shares with Vice Presidential candidate Tim Kaine, who during the debate with Pence, stated that suspending entry of Muslim refugees would violate our Constitution. Really! I’ve read it numerous times and have yet to find any mention of rights for foreign nationals to enter the U.S.

As a matter of fact, any President (other than Obama or Hillary) could suspend entry into the U.S. of “any alien or class of aliens who would be detrimental to the interest of the United States” under Section 292(f) of the Immigration and Naturalization Act which was signed into law by John Adams in 1798. The Act also allows presidents to impose imprisonment or deportation for any alien considered “dangerous to the peace and safety of the U.S.”.

In 1889 SCOTUS upheld the Chinese Exclusion Act of 1882 to “exclude foreigners from the country whenever…the public interest required such exclusion. The Asiatic Barred Zone Act of 1917 barred homosexuals, idiots, feeble-minder persons, criminals, epileptics, insane persons, alcoholics, professional beggars, all persons mentally or physically defective, polygamist, anarchists, and immigration from S.E. Asia, India and the Middle East. Shortly after the attack on Pearl Harbor, FDR signed a proclamation restricting entry and naturalization of Japanese, Germans and Italians. He also used his proclamation to deny Jews entry into the U.S. and returned them to certain death in Germany. Even Jimmy Carter used a proclamation to prevent Iranian terrorists form entering the country by restricting and revocation VISAs for Iranians.

The whole idea behind this influx of uncontrolled illegal immigrants and Islamic “refugees”  is the destruction of U.S. sovereignty and the continuation of a leftist agenda to turn control of the United States over to  the world’s ruling elite.

Alexander Hamilton wrote in 1802: “The safety of a republic depends essentially on the energy of a common national sentiment; on a uniformity of principles and habits; on the exemption of the citizens from foreign bias and prejudice; and on that love of country which will almost invariably be found to be closely connected with birth, education and family.”

Hamilton further warned that “The United States have already felt the evils of incorporating a large number of foreigners into their national mass; by promoting in different classes different predilections in favor of particular foreign nations, and antipathies against others, it has served very much to divide the community and to distract our councils. It has been often likely to compromise the interests of our own country in favor of another. The permanent effect of such a policy will be, that in times of great public danger there will be always a numerous body of men, of whom there may be just grounds of distrust; the suspicion alone will weaken the strength of the nation, but their force may be actually employed in assisting an invader.”

The survival of the American republic, Hamilton maintained, depends upon “the preservation of a national spirit and a national character.” “To admit foreigners indiscriminately to the rights of citizens the moment they put foot in our country would be nothing less than to admit the Grecian horse into the citadel of our liberty and sovereignty.”

← America Adrift Without a Rudder
Death Coming to America: ISIS →