“No state has the right to legislate away the blood-bought Constitutional right of every law-abiding American to protect their person, their family and their liberty.” Mike Pence

According to Chris Cox, executive director, NRA-ILA, Pro-2nd Amendment candidates don’t come any better than Mike Pence who has fought for our God given right to bear arms as a member of Congress, as governor of Indiana and now as a vice-presidential candidate.   In his 2016 Republican National Convention speech, Pence noted that “for the sake of our Second Amendment and for the sake of all our other God given liberties, we must ensure that the next president appointing justices to the Supreme Court is Donald Trump.”

Serving in Congress from 2000 until 2012, Pence compiled a strong voting record on firearm issues. He joined the amicus briefs in District of Columbia v. Heller in 2008 and McDonald v. Chicago in 2010, arguing that gun bans were unconstitutional infringements of the right to bear arms.   Immediately after SCOTUS ruled against the Washington, D.C. and Chicago gun bans, Pence noted that while the decision was a victory for the 2nd Amendment, “as a 5 to 4 ruling among the Justices, it also sends a warning,” that “SCOTUS is closely divided and at least four of its members would not extend a basic Constitutional right to all 50 states. For that reason alone, the nomination and confirmation of any SCOTUS justice requires careful deliberation to ensure that the member of the high court will protect the rights handed down by our Founding Fathers.”

Pence repeatedly voted for legislation that would protect firearm manufacturers and dealers from frivolous criminal action law suits and voted against every left-wing gun control legislation presented in Congress. He voted for an amendment that would allow law abiding gun owners to conceal carry in national parks as long as they were in compliance with state laws, and supported the Right to Carry reciprocity legislation to ensure that a conceal carry permit issued by one state would be valid throughout the country. He also supported the Sportsmen’s Heritage Act of 2012.

As governor of Indiana, Pence signed legislation strengthening state protections prohibiting lawsuits against members of the firearm industry stemming from the misuse of their products and signed legislation that protected the right to hunt and fish.

In contrast, Tim Kaine has prioritized attacking the rights of law-abiding gun owners. As a member of the Richmond City Council in 1997, Kaine suggested that Virginia’s urban 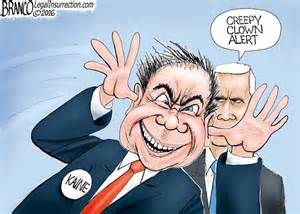 centers, such as Richmond, Fairfax and Norfolk, should team up to push gun controls that the majority of Virginians opposed. In 2000, as mayor of Richmond, he spent almost $7,000 of taxpayer money to charter buses to take left-wing city residents to D.C. for the anti-gun Million Mom March.  When questioned about his misuse of public funds, he told a reporter at the Richmond Times Dispatch that gun control was “an issue I’d rather be aligned with than this.”

As governor of Virginia, Kaine continued to support gun control, repeatedly vetoing legislation that would have made it legal to carry a gun in a locked container in a motor vehicle without a concealed carry permit and legislation that would have allowed conceal carry in restaurants that serve alcohol. Following the 2007 Virginia Tech shooting, he prioritized legislation to restrict the private transfer of firearms at gun shows, despite the fact that the perpetrator of the Tech shooting passed a background check prior to purchasing his firearm.

As a U.S. senator Kaine supported a wide array of gun control measures, voting for legislation to ban commonly owned semi-automatic firearms and their magazines; endorsed background check legislation that would criminalize nearly all private transfer of firearms; and voted to deny the 2nd Amendment protected rights of those placed on secret government watch lists without due process.

Kaine routinely voted against common sense pro-gun legislation, including a bill that would have created national Right-to-Carry reciprocity for lawful concealed-carry permit holders, and a bill that would ensured that veterans were not stripped of their right to own a firearm without due process.

Kaine’s evil twin, Hillary, shares his hatred of the 2nd Amendment to the point that she vows to expose the entire American firearms industry to baseless but potentially bankrupting lawsuits. She has also said that Australia’s gun ban, in which every firearm from pump-action shotguns to semi-automatic .22 calibers  were confiscated and destroyed, “would be worth considering on a national level” here in the U.S.

And lest you forget, if elected these two would be able to place gun-hating justices on the Supreme Court to assure the destruction of our right to protection.