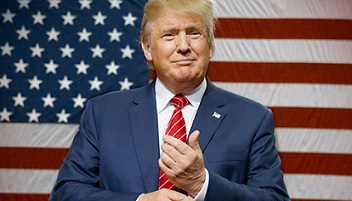 Last night a friend claimed that Donald Trump wouldn’t make a good president; he is brash, he is racist, he is a loudmouth; you know the normal things people learn to recite after being programmed by television news. The one I particularly loved was that, “Trump is arrogant.”  My friend questioned if one man could make “that much difference in the world today.”  To my friend’s credit, she was respectful enough to let me respond when she asked, “Really, what has Trump done?”

I said respectfully:  In June of last year, Trump entered the race for president. In just a little over a year, he has single-handedly defeated the Republican party elite. He did so thoroughly. In fact, he did so in such a resounding way that the Republican Party now suffers from an identity crisis. He literally dismantled the party and even dismantled and dismissed the brand and value of the Bush family.

Trump has Obama petrified that he will dismiss programs that weren’t properly installed using proper law.

Trump has single-handedly debunked and disemboweled any value of the news media, now suffering from an all-time level of distrust and disrespect.  What we see as headlines today are actually the last bubbles from the ship that is now sunk – meaning the standard news media, as a propaganda machines, has been exposed. They have no more value.

That Megan Kelly, FOX News, CNN, MSNBC, Washington Post, Rachel Maddow, the Huffington Post, the New York Times, Raleigh’s News and Observer, the AP, Don Lemon, Jake Tapper, and many more, failed to implement their collectively orchestrated lie on the American people against Trump, is actually a massive testament to Trump. The press colluded pure propaganda to accomplish his demise … and they have collectively failed and miserably.

Trump has leaders from all over the world talking about him, whether good or bad. Trust me, powerful men who have been president before weren’t liked by the global community. I doubt Mikhail Gorbachev liked Reagan when Reagan said, “Tear down that wall.”

Trump has expressly disclosed the fraud perpetrated on the American public by Hillary Clinton. He has, quite literally, brought Hillary to her knees—if you believe that nervous tension and disorders offer physical side effects and damage.

Trump has unified the silent majority in a way that should be patently frightening to “liberals.” As the press accuses Trump of being a house of cards, Trump has proven the press is the real house of cards. He has whipped up the entire establishment into pure panic. Trump has exposed them for who they are and worse, what they are. George Clooney was right when he said Trump draws live news coverage of his podium that he’s not yet approached. Thanks, George, you were perfectly correct.
In the same way Trump asked the African-American community this question, “At this point, what do you have to lose?” We have mass cop shootings, riots in our streets, ambushed cops, double-digit inflation, bombs blowing up in our cities, targeted police, a skyrocketing jobless rate, no economic growth, privately owned land being seized by the federal government, the worst racial tension in my lifetime, no God in schools, more abortions than ever, illegal aliens pouring into our country, sick veterans receiving no care, and a debt that doubled in seven years to $19 trillion. Are you really happy with the condition of the current system?

One man has done all of this in one year—one guy.  And with everything I’ve written above, you believe Trump hasn’t done anything?

You claim that you are afraid of Donald Trump? No wonder we’re in trouble. You can say that Trump is a lousy presidential candidate. That’s your right. Just don’t ever say he’s not effective.

Here’s just one example of how badly America is injured right now. There are high school football players on their knees during the national anthem simply because the press was used as propaganda to program those kids to do that very thing. These kids are mimicking NFL stars the same way they choose which brand of football shoe to purchase—they’re overtly brain-washed to do that very thing. Now, we have a generation of children who hate America.
But America’s problem isn’t that little children are on their knee in collective disrespect of America. Our problem is that America is on her knee from collective disrespect by Americans.

You can disrespect America all you want. But, it’s high-time you respect the silent majority. Because they’re not simply the “silent majority” as you’ve been trained to believe when Hillary calls them “deplorables.” The fact is, they are simply the majority. And now they’re no longer silent either. Donald Trump changed all of that, single-handedly and within one year.”

AS FOR ME–I AM ONE OF THE “ADORABLE DEPLORABLES”–

“If you do not take an interest in the affairs of your government, then you are doomed to live under the rule of fools.” – Plato
Source: This was an email forwarded to me by a friend, author unknown.

← Rigging the Election
The Truth About the Regressive Left →