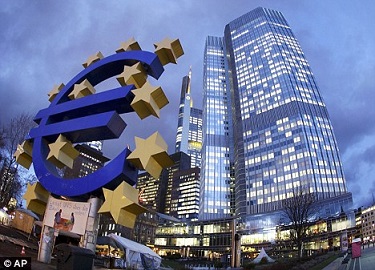 In 2012, 4 years before the Brexit referendum, the Daily Express published an article, “EU Plot to Scrap Britain” by Macer Hall, that exposed a plot between Germany, Italy and France, the “Berlin Group,” to change the leadership of the European Union by merging the presidencies of the European Council and the European Commission into one super presidency. Such a merger would represent a massive shift of power into the hands of a single unelected bureaucrat and create a modern day equivalent of the European emperor envisioned by Napoleon or a return to the Holy Roman Empire of Charlemagne. While most people romanticize and glorify the reigns of these two emperors, they forget the bloodshed and conveniently blot out the bloody history.

In a Daily Express article, “European Super-state to Be Unveiled,”  a blueprint to effectively do away with individual member states was exposed. All EU countries would lose the right to have their own army, criminal law, taxation system or central bank as those powers would be transferred to a single bureaucracy in Brussels. Member states would also lose what little control they had left over their own borders, including the procedure for admitting and relocating refugees.  All of this, of course, is for the good of the whole, a means to bring “democracy” to the masses, according to the ruling elite.   While not all EU members are on-board with this new super-state,  at least not yet, Socialist ruled countries such as France want to set up a common Eurozone treasury to oversee the “permanent transfer of funds from wealthier northern nations to shore up Mediterranean economies.”

Democracy?  Really?  That doesn’t even seem logical to anyone who has followed the European Union since its inception. The Union went from being a common market in the 1970s, where countries traded freely, to now having its own flag, national anthem, and even president. Through unelected and unaccountable bureaucrats, the EU has inveigled itself so deeply in to the lives of its ‘citizens’, so deeply embedded itself in to every aspect of life, that everything a person does is regulated in some way. Thousands of regulations, bans and edicts are issued each year, each limiting the freedom of people just that little bit more. Already European culture is being slowly eroded and destroyed, national identities removed, freedoms erased.

In a 2006 interview, Vladimir Bukovksy, a former Soviet dissident, called the EU a “monster” that must be destroyed, before it develops into a full-fledged totalitarian state. He said he came to that conclusion in 1992 after he was allowed to read secret documents that confirmed the existence of a “conspiracy” to turn the EU into a socialist organization.  “ When you look into all the bizarre activity of the EU with its 80,000 pages of regulations, it looks like Gosplan, a Soviet organization that planned everything in the economy, down to the last nut and bolt, five years in advance.” The EU corruption, according to Vladimir is exactly the Soviet type of corruption, going from top to bottom rather than from bottom to top.

If the EU, as it stands now is that corrupt, what would happen if they became their own super-state?

A secret 9 page document endorsed by the foreign ministers of both Germany and France detailed what appeared to be a road-map for this new super-state. The document called for the establishment of a permanent EU civil-military chain of command and a “common financing” for its military operations for “crisis prevention and management.” In addition, the document called for “the world’s first multinational border and coastguard, “FRONTEX” manned by permanent staff with “adequate technical equipment to fulfill this task.” Lastly, the document said that Germany and France would also seek to establish a “fiscal capacity” for the EU, i.e. the means to generate revenue for itself. While not specific as to the means of this revenue, it would most likely take the form of an EU power to tax its member states, and eventually all of Europe.

Another leaked document, “The Future of the EU: Required Integration Policy Improvements for the Creation of a Stability Union” hasn’t helped alley fears of a German takeover of the new super-state. According to a 6 page memo by the German foreign office, Europe’s economic powerhouses, Germany, Finland, Austria and the Netherlands, should be able to intervene in how beleaguered Eurozone countries are run and demand that if the euro rules are “consistently violated,” they should be able to demand action form the European Court of Justice.

At a meeting in Bratislava on September 16 of this year, EU leaders, less the UK, agreed on a time line for developing military cooperation.  Concrete proposals are expected by December and member nations expect to form an agreement by Spring of next year.  According to Frederica Mogherini, the EU’s de facto foreign minister, this “time the push for a shared military is the real stuff. At the moment, I don’t see resistance; at the moment, I see readiness.”

Jean Claude Juncker, the EU Commission president, praised the progress made in implementing a new border and coast guard force as a major step toward a super-state army which, while only a 1,000 strong at its inception, can be deployed “in any EU country, even against that country’s will.”

Hitler would be jealous!.

The first fearful lesson of history is that absolute power inevitably corrupts absolutely. That prospect is what we are looking at now. The second fearful lesson is that if we do not learn from history we shall be condemned to repeat it.

Source: The Spirit of Charlemagne Is Alive in Europe