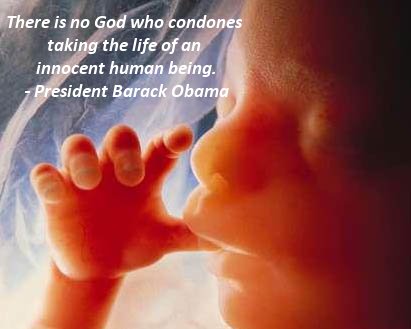 “The prospect of fetal pain, pain that results from abortion – cuts through philosophical abstractions and scientific nomenclature, proceeding directly to the heart.  A being that feels pain makes an urgent demand for recognition.  Functioning neurological structures necessary for pain sensation are in place as early as 8 weeks, but certainly by 13 ½ weeks. . .By 13 ½ weeks, the entire sensory nervous system functions as a whole in all parts of the body, except in the skin or back of the head.” Vincent J. Collins, Professor of Anesthesiology at University of Illinois College of Medicine.

The recognition of fetal pain was heard nationally when President Ronald Reagan gave a speech to the National Religious Broadcasters in 1984.  Reagan said “. . .doctors confirm that when the lives of the unborn are snuffed out, they often feel pain, pain that is long and agonizing.” Of course his speech ranked the feathers of the pro-abortion crowd who claimed fetal pain was unproven scientifically and was nothing more than emotional blackmail.   But a group of 26 doctor , including pain specialists and two past presidents of the American College of Obstetrics and Gynecology released a statement in response to President Reagan’s speech  on February 13, 1984 that said “in drawing attention to the capability of the human fetus to feel pain, you stand on firmly established ground.”

The concept behind fetal pain has been fully established and Dr. Steven Zielinski, an internal medicine physician from Oregon, is one of the leading researchers into it.   Dr. Zielinski testified before Congress that an “unborn child could feel pain at 8 ½ weeks and possibly earlier”.  He and his colleges Dr. Vincent J. Collins and Thomas J. Marzen were the top researchers to point to fetal pain decades ago.  Collins, before his death, was Professor of Anesthesiology at Northwestern University and the University of Illinois and author of “Principles of Anesthesiology”, one of the leading medical texts on the control of pain.  They wrote that  “the functioning neurological structures necessary to suffer pain are developed early in a child’s development in the womb.   Functioning neurological structures necessary for pain  sensation are in place as early as 8 weeks, but certainly by 13 ½ weeks of gestation.    Sensory nerves, including nociceptors, reach the skin of the fetus before the 9th week of gestation.  The first detectable brain activity occurs in the thalamus between the 8th and 10th weeks.  The movement of electrical impulses through the neural fibers and spinal column takes place between 8 and 9 week’s gestation.  By 13 ½ weeks, the entire sensory nervous system functions as a whole in all parts of the body.”

Dr.  Kanwaljeet Anand of the University of Arkansas Medical Center has provided further research to substantiate their work.

As early as 18 days after conception, the brain begins to take shape.  By 20 weeks the brain has already differentiated into forebrain, midbrain, and hind brain.  The spinal cord begins to grow at 18 days.  By 5 weeks, the important pain receptors start to appear in the baby’s body, first around the baby’s mouth, followed by development of nerve fibers which carry pain stimuli to the brain.   As early as 6 weeks the baby moves away from a    pain stimulus applied to the mouth.

The left justifies the murder of unborn babies by claiming that only people feel pain – inanimate clumps of cells do not.   In  the abortion controversy, it comes down to who you believe –  Pro-abortion doctors and  Planned Parenthood who argue that fetuses don’t experience pain until the very end of pregnancy or doctors dedicated to the sanctity of life.

There is a very informative article written in 1988 by Reverend James A. DeCamp that explains the types of abortions and the effects  it has on the unborn baby that everyone should read.  You can reach the article at this link.

Planned Parenthood Federation of America claims that the 665 clinics run by its affiliates provide a “wide range” of health care as justification for taxpayers providing more than 40% of their funding, and that abortion is but a small proportion of their services.  Yet, data shows that Planned Parenthood is the country’s largest abortion provider with affiliates performing more than 300,000 abortions per year, which amounts to approximately one out of every three in the country.

In a country where people are made to suffer the loss of income and property to protect some fish no one has ever heard of, where PETA   can run around threatening fisherman because “fish feel pain,”  where it is illegal to kill a predator because it is on the endangered species list,  and where pets have more protections than humans,  it should not surprise me that the progressive socialist crowd runs rough shod over our government.  It shouldn’t – but it does!   God created life – he made all of us in his image – and that includes an average of 3,000 unborn babies that are murdered every single day.

← Laws Are Being Enforced
About Trump’s ‘Muslim Ban’ →