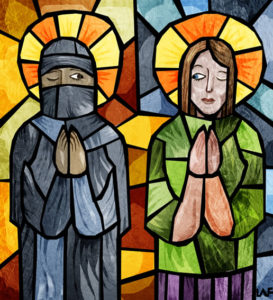 In 2014 a journalist from La Croix questioned Pope Francis concerning the legitimacy of the fear of Islam and terrorism. The Pontiff replied that it was “not productive to think of Islam as a threat” and pointed out that it shared roots with Christianity. “It is true that the idea of conquest is inherent in the soul of Islam. However, it is also possible to interpret the objective in Matthew’s Gospel, where Jesus sends his disciples to all nations, in terms of the same idea of conquest.”    Really, when is Muhammad sending his “disciples” out to conquer with forced conversion or death equal to Christ sending out his disciples to teach the Word. I have yet to read where Peter, or Luke or Matthew cut someone’s throat for refusing God.

Just last year the Pope said he would “not label Islam as terrorist” because that would be “unfair and not true.”  He told the press that the world is at war because it has lost its peace. “This is war, the world has been at war for a while now….this is not a “religious war”….all religions preach peace… it’s the others who want war.” Who are those others?

Apparently he has not read the Islamic state’s response in “By the Sword” in an issue of Dabiq, the propaganda magazine of ISIS, that this war is religious in nature, while criticizing the Pope for his “naiveté” in clinging to the conviction that Muslims want peace or that acts of Islamic terror are economically motivated.   “This is a divinely warranted war between the Muslim nation and the nations of disbelief.”

They attack the Pope for claiming that “authentic Islam and the proper reading of the Quran” are opposed to every form of violence. “Francis continues to hide behind a deceptive veil of good will, covering his actual intentions of pacifying the Muslim nation.”   He has “struggled against reality” in his efforts to portray Islam as a religion of peace.” They continue the attack by urging all Muslims to “take up the sword of jihad,” the greatest obligation of a true Muslim. “Waging jihad, spreading the rule of allah by the sword, is an obligation found in the Quran, the word of our lord. The blood of the disbelievers is obligatory to spill by default. The command is clear. Kill the disbelievers, then kill the polytheists wherever you find them.”

They went on to say that the gist of the matter is that “there is indeed a rhyme to our terrorism, warfare, ruthlessness, and brutality,” blaming it entirely the “absolute and implacable” hatred for Christianity. Even if the West were to stop bombing, imprisoning or vilifying ISIS, “we would continue to hate you because our primary reason for hating you will not cease to exist until you embrace Islam. Even if you were to pay jizyah (tax for infidels) and live under the authority of Islam in humiliation, we would continue to hate you.”

Why is the Pontiff trying to mend ties with a religion that fosters violence and murder? Shouldn’t he wait until a peaceful overture is made from those standing in the camp of the religion of violence — from those leading in the Islam faith to make clear  that they have no intention of “wiping out” Christians or Jews?”

Father Samir Khalil Samir, author of 111 Questions on Islam, told Aid to the Church in Need that the Pontiff has told him personally that “for a long time now he has wanted to re-knit the ties between the Vatican and Islam.” He is insisting that Islam is a religion of Peace because “we need first of all to rekindle our friendship with the Muslims….”

Pope Francis, well-intentioned or not, is still pretending like discussion can solve hundreds of years of hatred and persecution. He’s acting as if Islam has not declared war on Christianity, or Jews. And he’s blinding himself to the fact that you can’t bring a talking point to a suicide bomb war and expect peace to prevail.

So, the question remains unanswered.  Is Pope Francis an evil Marxist with malice in his heart toward human liberty, is he blissfully ignorant in all geopolitical matters, or is he simply a blithering idiot?  Who am I to judge?”  Vic Biorseth