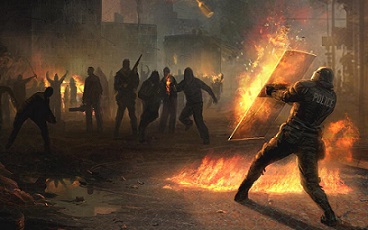 “In the mindless rush toward the acceptance and celebration of all cultures, the global community of man has embraced the concept of multiple, distinct, enclaves within the borders of once homogenous nations resulting in tribal warfare. Petty tyrants, demagogues, and academics stoke the fires of shame and distrust in countries that once prospered in the peaceful assimilation of all citizens. ”  Gary Spina

During eight years of conjuring images of an abyss, Obama shamelessly beat the tribal drum – tribe against tribe, the haves against the have-nots, rich against poor, blacks against whites. It was this tribal world in which Obama and left-wing progressives pinned their lust for wealth and power.  Now watch as the fires burn, as the shadows gather around primordial tribal drums. Atavisms walking with their knuckles on the ground fan the embers of old rivalries which result in race riots and wars, in the execution of police officers and the scourge of terrorism world-wide.

Twenty-first Century America is beginning to resembles the primitive tribes of Africa, Asia and eastern Europe, the ancient City States along the Mediterranean shores, the Papal States of a divided Italy, or the feudal enclaves and kingdoms of western Europe. For places like Dearborn, Michigan and other American cities, the “No Go Zones” of modern Europe loom ominously on the horizon.

The term multiculturalism is purposely ambiguous.  Most think of multiculturalism as embracing many different cultures within society. But there is a deeper layer, a layer that the ruling elite cling to, a layer that American political philosopher Samuel Huntington described as basically anti-Western ideology – the manipulation and eventual destruction of sovereignty where everything of tradition and value melts into oblivion. Social instability, caused by the steady erosion of standards and values, coupled with a scramble over dwindling economic opportunities by conflicting ethnic groups, produces precisely the alienation and conflict needed.

The globalist form of multiculturalism is in reality nothing less than cultural imperialism in which a global plutocracy imposes its will on the people, poisoning the roots of all cultures in which it comes into contact, turning the richness of cultural diversity into a prairie wasteland in which only one brand of bland mass-produced culture is permitted.
As a political tool multiculturalism has several applications. It is used to prevent a national consensus among the electorate. The confluence of divergent life views, cultures, beliefs, religions, ethnic habits, etc. insures a swirling river of discontent upon which the multiculturalist rides. It is a perfect method of ensuring that there can never in the future be accord, unity, and a common agreed upon destiny among those ruled. Multiculturalism represents a basic form of divide and conquer, to the benefit of corrupt government and its sponsors.

Like Drugs, it is an insidious weapon. Both destroy the heart and fabric of a people. Both are sponsored from the top down by one world elitists bent upon creating a world order whose power is such that its subjects possess no potential for resistance. Make no mistake – in a tribal world, only the chieftains come out winners.

Today, America, Canada, and most of Europe are dominated by politicians about whom the best that can be said is that they are men of ill repute, each out to loot the state. One thing is certain, the American ruling elite of today are far closer in ideological viewpoint to world government ruled by a privileged few than it is to the world of the American Revolution or the Constitutional Convention of 1789.

“Multiculturalism matters because what is at stake is nothing less than our sovereignty, self-determination, political unity, and ability to hold our leaders accountable—in other words, our very freedoms. It may be a truism and a tautology, but it is worth repeating that constitutional republicanism as we know it can only exist through the active participation of one united people working within the confines of the nation-state. It is the finite unit at which people have debates and come together to agree on principles. The sharing of a common culture and language creates the trust quotient that is necessary to succeed.” Mike Gonzalez, Multiculturalism and the Fight for America’s National Identity

← Why Do the Heathen Rage
Being Faithful Christians →