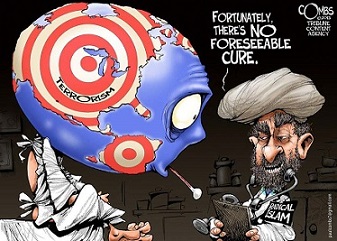 Keep Calm and Carry On, according to Brad Macdonald “is as British as tea and crumps” and I might add, as American as apple pie. This trait was on display in London on March 22 when a terrorist in a rental car mowed down more than 40 people on Westminster Bridge, smashed into the fence that protects Britain’s Houses of Parliament and fatally stabbed a police officer.  That very evening Prime Minister Theresa May encouraged the nation to behave as normal – carry on like nothing happened. By the next day motivational signs were popping up in the Underground stations throughout London. One read: “All terrorists are politely reminded that this is London and whatever you do to us we will drink tea and jolly well carry on.” Politely reminded?

Terrorist apparently took the country’s calm and carry on message to heart because that is what they did on June 3rd when another 7 people were killed and dozens injured as terrorist used a white rental van to plow into pedestrians on London Bridge and then continued on to Borough Market where three attackers jumped out and started stabbing people in pubs and restaurants.

After 9/11 we were told, as horrific as the attack was, terrorists didn’t do existential damage to our nation – we need to put it into perspective. We were told to pretend that when a terrorist drove a SUV into a group of pedestrians at UNC, or attacked NYC police officers with a hatchet, or opened fire on military bases in Tennessee and Texas, or attacked the Inland Regional Center in California, etc. that we needed to look the other way. After the Boston bombing we were told that we must render terrorism ineffective by refusing to be terrorized, recognize it for what it was – a rare event.

Hogwash – while that might sound rational, mature or even noble, it is a very destructive policy. It has put both the UK and the US on the road to national suicide. Terrorism isn’t solved by keeping calm or by ignoring attacks or labeling them workplace violence. It is solved by asking the tough questions, by taking action, by recognizing where the system is failing and by making changes in the way we think and behave.

When Hitler invaded the Rhineland, France’s foreign minister tried to persuade Britain  to support a potential French decision to dispatch police to the demilitarized zone to oppose the Germans since the Nazis had not yet secured their position and intelligence indicated it was still possible to oust them. The Brits decided that “if there was even one chance in a hundred that war would follow that decision, they couldn’t or wouldn’t commit England so nothing was done.  To the Brits in 1936 peace was worth almost any risk, ignoring evidence and hoping Germany would simply go away. But their silence and apathy only served to empower Hitler and made the inevitable conflict much worse. American wasn’t any better.

We were basically indifferent to Hitler until 1938 when we learned of the anti-Jewish pogrom. Even in 1939 when war seemed inevitable most Americans hoped the British naval blockade would eventually bring Germany to its knees. It was only in 1940 with the collapse of France that the U.S. wanted to supply England with whatever they needed to keep Hitler at bay. Even after Germany sank two American destroyers most Americans still had their heads in the sand. It was only after Japan bombed Pearl Harbor and Hitler declared war on the U.S. that Americans woke up to the a they had tried so hard to ignore.

When will we ever learn?  Both the US and the UK are making the same mistakes they made in the 1930s preferring pious platitudes over cold hard facts.  Keep calm and carry on may make everyone feel brave and tough but it does nothing to prevent another terrorist attack.

Salim Mansur, Associate Professor of Political Science at the University of Western Ontario, says that terrorism “is fueled” by the ideology of Islamism and if we are to succeed against them we need to “fully grasp the meaning and objective of this ideology, as we in the west once did when confronted with Soviet Communism.” It is essential to put forward a coherent policy instead of platitudes and “band-aids” to contain and defeat what they represent.

Islamism is “the ideology of armed jihad, of waging war by any means available to enforce sharia rule in Muslim majority countries and seek sharia compliance by democracies in the west for Muslim immigrants….The relative success of the global Islamist movement based on the organizing principles of Islamism as an ideology, has spawned homegrown terrorism in the west among second- and third-generation immigrant Muslims and non-Muslim converts enticed by Islamism. This phenomenon of homegrown Islamist terrorism since 9/11 poses clear and present danger to the domestic security of western democracies.”

“The absence of a coherent understanding of Islamism makes for the absence of a coherent strategic policy to contain and defeat it. In our contemporary world, the west is not insulated against the war raging within the world of Islam. Islamists and apologists for Islamism are in our midst and have duly infiltrated western institutions to degrade and subvert liberal democracy. They have been skillful in manipulating the west’s liberal democratic values for their aim. They have exploited multiculturalism to push their agenda of sharia rule…”

Professor Mansur points out that history is merciless in proving that “those who appeased the enemies of freedom and democracy in the hope that they would be saved from the impending peril—for instance, of Nazism or Communism—only made the cost of eventually defending freedom and democracy immensely greater than it would have been, had more robust actions been taken sooner rather than later.”