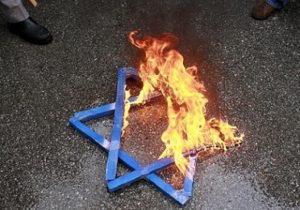 A recent study, “Antisemitic Violence in Europe, 2005-2015 Exposure and Perpetrators in France, UK, Germany, Sweden, Norway, Denmark and Russia,” whose content is almost as long as the title, let the world in on a not-so-latent statement of fact that “individuals of Muslim background stand out among perpetrators of anti-Semitic violence in Western Europe.” Commissioned by the Center for Research on Extremism at the University of Oslo and written by Dr. Johannes Due Enstad, the study examined a cross section of data across Europe, excluding vandalism and threats, focusing instead solely on tangible physical violence perpetrated against Jews.

The study concluded that the “level of Antisemitic attitudes was significantly higher among Muslims than non-Muslims; that “the level of anti-Semitism” roses with the level of “religiosity and fundamentalist interpretations of Islam;” and the study refutes the “widespread assumption that Muslim anti-Semitism is a reaction to discrimination or suppression.”  The authors felt their analysis indicated “current interpretations of Muslim identity and belief are major sources for hatred against Jews and that those beliefs are clearly translating into physical violence” that has a serious impact on Jewish life in Europe.

The laundry list of Muslim violence committed against Jews in Europe is well known – the murder of French Jew Ilan Halimi, the slaughter of three Jewish children and a Rabbi at a Jewish school in Toulouse, mob attacks on a synagogue in Sarcelles in Paris, a shooting at a Belgium Jewish Museum, the Hyper Caches massacre, to name only a few.  Protestors have attacked synagogues, smashed windows of Jewish businesses and torched others, in scenes disturbingly reminiscent of the 1938 Kristallnacht in France. Marchers have chanted “Jews to the gas chambers,” on the streets of Berlin.  An Imam of a Berlin mosque is under investigation for delivering a sermon in which he called on Muslims to murder Jews.

The Epicenter of this culture of hate is the Muslim world where anti-Semitism of the most vulgar kind enjoys legitimacy. Anti-Semitic cartoons, television series and debased fantasies, including blood libel, are so ubiquitous as to merit little comment. The Protocols of the Elders of Zion is openly sold and widely read. For those not familiar with the Protocols, it is an anti-Semitic fabricated text that describes a Jewish plan for global domination. First published in Russia in 1903, it was translated into multiple languages. Henry Ford of Ford Motors actually funded the printing of half a million copies that were distributed throughout the US in the 1920s. It was used by the Nazis as propaganda against Jews and assigned reading for German school children after the Nazis came to power in 1933.

In 1937, Saudi Arabia’s King Ibn Saud summed up the history of the Jew-hatred of Muslim extremists when he told British Col. H.R.P. Dickson that “our hatred for the Jews dates from God’s condemnation of them for their persecution and rejection of Isa (Jesus) and their subsequent rejection of His chosen Prophet (Muhammed) .  For a Muslim to kill a Jew, ensures him an immediate entry into heaven and into the august presence of God Almighty.”  The hatred of Jews  was so strong that when Hitler introduced the Nuremberg Laws in 1935, he received congratulatory telegrams from throughout the Arab world.  The Grand Mufti of Jerusalem led the Arab revolt in South Syria before moving on to Berlin and allying with Hitler to murder Jews during the Holocaust.

With approximately 1.6 billion Muslims in the world today, given the pervasiveness of this culture of hate, there are more anti-Semites in the world today than at any time since WWII. Many of them hold positions of religious and political power and many more consider anti-Semitic violence legitimate and even praiseworthy. Still more subscribe to petty anti-Semitic stereotypes.   Muslim anti-Semitism, combined with the West’s latent anti-Semitism, has given birth to a vulgar, genocidal ideology , an encyclopedia of petty stereotypes, and the delusions of those who believe they are standing up for the oppressed and downtrodden by hatting Jews, Israel and any and all Jewish supporters.

Unfortunately anti-Semitism is also becoming fashionable in the U.S. according to Charles Small, the director of the Institute for the Study of Global Anti-Semitism and Policy. The majority of religiously motivated hate crimes in the US target the Jewish community and there has been a rise in anti-Semitic incidents in the New York area: “Over 100 institutions in the US reported anti-Semitic attacks. 56% of US students experience anti-Semitism. Pro-Islamist funders are changing the culture on US university campuses.”

“The growing tide of anti-Semitism shocks the conscious of everyone who values freedom, and the ugly, hateful acts particularly stain the character of democracies where liberty and religious freedom are supposed to be respected.“ Mike Ferguson

← America is Failing: Too Smart For the Simple Truth
AMERICA’S CHILDREN: OUR FUTURE →