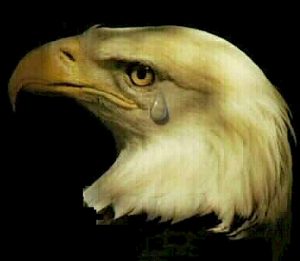 Ronald Reagan once said “that if we ever stop being one nation under God, then we will be a nation gone under!”

Take a good look around you, not as a Democrat, Republican or Libertarian, but as the citizen of a nation blessed above all others in history. Ask yourself why do we find ourselves mired in wars and terrorists attacks that we can’t seem to prevent? Why do we see and tolerate so much corruption in government, in business, and in our public and private lives?  Why do we insist on “tolerating” what we know to be wrong while trying to make excuses for it as some kind of disease or syndrome?  We think nothing of watching our God-given sacraments perverted beyond all reason!   Same-Sex marriage, anyone?  Men in women’s bathrooms, locker rooms and showers pretending to be something they can never be!  How about a sex change at taxpayer expense?

And yet people still wonder why our country has declined.  We have allowed atheists to bully Christianity from the public square, from our schools, and our government.   We have allowed these people through social activists courts, to try to eradicate God, the very Creator that was paid homage to by our founding fathers in the documents and buildings that helped found this country and sustained her through all her trials and challenges to become the wealthiest and most generous place on earth, that is until now.

We, as supposedly rational, reasonable humans have allowed the blatant murder of millions  of unborn children for the convenience of some women who don’t want the responsibility of bringing another life into this world.  The core argument is “well, we don’t really know when life begins.”  Really?  Ask a farmer when he thinks a seed begins to germinate  and he’ll tell you – the moment it is placed in the ground.  Life begins at conception and yet, we still allow evil to murder the greatest ongoing gifts that God has given us  —  our children.  Our children make us immortal in the sense that they carry on our seed to eternity.

“Just because the silent screams of the unborn are inaudible as they are dismembered and their organs harvested, does that make the current doctors of death any less maniacal, any less evil or less sadistic than Mengele and his cohorts?” Doug Hagmann

The biggest culprits of our cultural decline are our churches.  All claim to be the “bearers of Christ’s name” yet they ordain unbelievers and those who preach exactly the opposite of what Christ Himself taught.   There should be a loud and constant cry by the preachers of this country against abortion, homosexuality, sexual permissiveness, and the falling away of the supposed believers in this great country.   Did the government put a lock on your lips?  Are you more concerned about the government taking away your tax exempt status?  Is speaking God’s truth no longer important?   Most mega-churches are nothing more than monuments to the men and women who built them.  Quantity does not outweigh quality in God’s kingdom.  The church is supposed to be a living body, not a cold stone-and-steel building.

Look around you at how ungodly this world has become and the speed at which it is getting worse and then go pick up a copy of Jonathon Cahn’s book “The Harbinger”.  Check out the facts in the book and then take another look around you.

America needs to get on her collective knees and seek repentance and a new commitment to the Creator who gave us this country and has sustained us until now.  No civilization is too big to fall.

“Just because we ignore God’s laws does not invalidate them. A lie doesn’t become the truth, wrong doesn’t become right, and evil doesn’t become good just because its popular.  Every lie crumbles under its own weight.  The dustbins of history are stuffed with conventional wisdom of culture that proved false.  Truth is not decided by a popularity contest.”  Rick Warren

You have a choice  —  to stand on your feet and give God His due, or live on your knees as a slave to the world’s system.

source:  Michael J. Nellett, Western Journalism — “What Have We Done To America?”