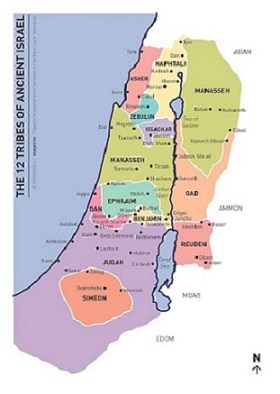 The word Occupation as now used by left-wing churches, the current ruling elite, academia, and the United Nations is nothing but cover for their anti-Semitism.

Occupation occurs when a foreign army invades and controls land that doesn’t belong to them. During WWII, German occupied most of Europe and Japan occupied parts of China. Tibet is truly the longest occupation in the modern world but no one wants to speak of that. Legally, occupation is only when the land occupied had formerly been under the legal control of another sovereign nation.

Neither Palestine nor Syria is an indigenous name for the country either represents today.  These were names given by outsiders – sailors and merchants coming from the West to loosely defined regions along the eastern Mediterranean coasts and their hinterlands. The indigenous peoples of this region called the coastal strip of Lebanon and Syria the land of Canaan whereas the Greeks called it Phoenicia; and inland Syria was called Aram.  The Nation of Israel, on both sides of the Jordan, was divided into two kingdoms –  Israel (10 Northern tribes) and Judah. Also in place were the smaller states of Ammon, Moab, and Edom, northeast, east, and south of the Dead Sea. Pleshet in the Hebrew Bible (Philistia) occupied the coastal strip south of Jaffa. The Bible gives us Canaan, Israel, Aram, and other names, in addition to yet others in various ancient sources, Egyptian, Greek, etc.

Judea was the Roman name for the Land of Israel during the heyday of the Roman Empire. The name covered not only the area of Judea today but included both sides of the Jordan, most of the coastal plain, Samaria, most of Galilee, the Golan heights of today and more, specifically the whole area ruled by or chiefly inhabited by Jews.  This fact is well documented by Roman and Greek historians and geographers Strabo and Ptoemy.   Pliny the Elder wrote admiringly of Judea’s capital and religious center: “Jerusalem, by far the most illustrious city of the East….” Tacitus, a Roman historian, tells us that “Judaea was divided: the Samaritans under Felix and the Galileans under Ventidius,” placing both Samaria and Galilee within Judea. Strabo wrote that of Judea’s borders that included the Golan and a strip of land on the east bank of Jordan, stretching South into the Sinai touching on Egypt.

When Rome conquered the country in 63 BC, the Kingdom of Judea, ruled by the Hasmonean dynasty, stretched along both sides of the Jordan and controlled, besides Judea proper, most of the coastal plain, Samaria, most of Galilee and the Golan Heights. While Herod ruled Judea, Augustus Caesar awarded Judea vast tracts of land running far to the east of the Golan today, lands that were inhabited and ruled by Jews.  Herod, an Idumean [Edomite] of the tribe of Esau, was placed on the throne as an ally of Rome, usurping the kingship of the Hasmoneans [Maccabees].  After his death Rome divided the kingdom into several parts giving  the sons of  Herod a chance to rule.

The name Palestine was not officially used by the Romans before Hadrian in 135 AD.  Hadrian visited Jerusalem in 130 AD which was still in ruins from the first Roman/Jewish War of 66-73 AD.  After rebuilding the city he renamed it Aelia Capitolina Jupiter Capitolinus after himself and the king of the Roman gods.  But when he built a temple to Jupiter on the ruins of the Temple of Solomon (2nd Temple) considered sacred by the Jews, the populace rose up under the leadership of Simon bar- Kokhbah in what has come to be known as bar Kokhbah’s Revolt (132-136 CE).  Joined in his battle by the Arabs of the region, 580,000 Jews were killed and over 1000 towns and villages destroyed before it ended. Hadrian banished the remaining Jews from the region and renamed it Syria Palaestina [Palestine] after the traditional enemies of the Jewish people, the Philistines. He replaced the banished Jews with settlers from surrounding Arab countries, Egypt, Syrians and even veterans of the Roman legions. Hadrian also ordered the public burning of the Torah, the execution of Jewish scholars, and prohibited the practice and observance of Judaism.

The Roman name change was part of a complex of related oppressive measures of national despoliation, punishment and oppression. From the start the name was laden with connotations of hatred for the Jews, the slaughter of hundreds of thousands in the war and through the legionaries’ vengeful acts, the ruin of hundreds of villages and towns, the enslavement of survivors, expulsion of a people from their homes and lands – what we would call today – Ethnic Cleansing.

Despite the name change, Greek and Latin writers after Hadrian continued to use the name Judea along with Palestine when writing of the region. Eusebius, a Christian historian, writing around 300 AD summarized the changes of name: “…Hebrews…inhabited the neighboring country to Phoenicia, which itself was called Phoenicia in old times, but afterwards Judaea, and in our time, Palestine.”

The Arab treatment of geographical names after their conquest of the country [635-640 AD] was paradoxical. The Quran mentions the Holy Land divinely assigned to the people of Israel [Suva V:12,20-21].  It was only later that they considered the land as an undifferentiated part of Syria, a view that lasted until the end of the British mandate period. The Western world still saw it as the Holy Land during the 19th century although it was alternated with Palestine, Judea, Zion, the Land of Israel, the Land of the Bible.  In 1920, when the peace negotiators at the San Remo conference established the country as the Jewish National Home, it was officially called Palestine. Prior to WWI it was an administratively indistinct area of the Ottoman Empire.

The name Palestine cannot be divested of the negative overtones of its history, from the circumstances of its Roman official origin. It cannot be considered a “neutral, value free,” purely “scientific” term as some would have it. It is a lie used by the left in an attempt to cover their anti-Semitism.

In 1977, a member of the PLO,  Zahir Muhsein, the leader of the al-Sa’iqa Organization, revealed the truth in an interview to the Dutch newspaper Trouw:  “The Palestinian people does not exist. The creation of a Palestinian state is only a means for continuing our struggle against the state of Israel for our Arab unity. In reality today there is no difference between Jordanians, Palestinians, Syrians and Lebanese. Only for political and tactical reasons do we speak today about the existence of a Palestinian people, since Arab national interests demand that we posit the existence of a distinct ‘Palestinian people’ to oppose Zionism for tactical reasons, Jordan, which is a sovereign state with defined borders, cannot raise claims to Haifa and Jaffa.”

In 2012, Fathi Hammad, minister of the interior and national security for Hamas, a recognized terror group, also acknowledged that “half of the Palestinians are actually Egyptians and the other half are Saudis.

Israel’s occupation of Palestine is a lie.  The so-called Palestinians are nothing but a pawn to further the political agenda of their fellow Muslims, the United Nations and the far-left in America and Europe.

← JESUS HAS NO FEAR
Kill (Murder) Everyone Who Has It →