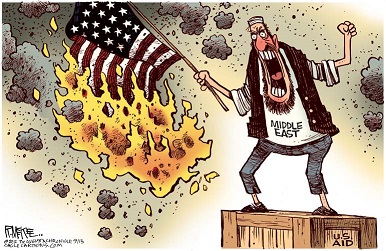 For us today, what is at stake is Europe, the lifestyle of European citizens, European values, the survival or disappearance of European nations…. Today, the question is not merely in what kind of a Europe we would like to live, but whether everything we understand as Europe will exist at all.” Victor Mihaly Orbon, President of Hungary

James Burnham in his book “Suicide of the West” predicted that the mindless magnanimity of liberals, who subordinate the interests of their own people and nations to utopian and altruistic impulses, would bring about an end to Western civilization. He wasn’t far off the mark. Just look at what is happening to Europe!

Why are so many of the countries of Western Europe determined to hasten the end of their own national identity? Why are they refusing to draw any meaningful limits to the current influx of third-world “refugees,” a significant number of whom are probably not bona fide refugees, and a much smaller but still-worrisome number of whom are probably jihadist bent on the destruction of their new host countries?  Jean Kaufman, in her article at the Weekly standard, attempts to offer explanations as to why Europe is so intent on suicide. While all of her explanations may be valid, there is one that we both can agree on – Western leaders, raised on the gospel of cultural and moral relativism, have abandoned common sense to embrace secular liberal ideology.

Hungary, Poland, the Czech Republic, Slovakia, and Bulgaria seem to be the exception to Europe’s desire to destroy itself. Hungary is a nation where Christianity seems to not only be holding its own, it is thriving. “Sticking to your traditions and legacies”, according to Secretary of State Zoltan Kovacs is important when living with and close to Islam. “Europe’s legacy is a Christian legacy…” Securing the borders to stop illegal migration is the “only way to reinstate law and order…. So, that’s why it does matter who has come in and in what manner people are coming.”  Hungary, which has seen the chaos and terrorism throughout Western Europe has told the European Union “to take a hike.”

Poland is also refusing to comply with the EU’s pressure to accept Muslim refugees without any proper vetting process. Deputy Defense Minister Michat Dworczyk says that until there is a mechanism to verify the Muslim refugees, Poland will not accept them. “And if there is a shadow of a doubt, it is the duty of every state, including Poland, to ensure the safety of its citizens. Security policy is a national, not European, competence” said Polish Interior Minister Mariusz Blaszczak.

In the Czech Republic, while they are willing to take Eastern Slavs and Christians from Syria, Muslims are not welcomed because of cultural differences.  Eastern Slavs and Christians from Syria are welcomed.   But with regard “to the worsened security situation in Europe and dysfunctionality of the quota system (imposed by the EU), we will not participate in it. The European Commission blindly insists on pushing ahead with dysfunctional quotas which decreased citizens’ trust in EU abilities and pushed back working and conceptual solutions to the migration crisis.”

Like the other nations, Slovakia has also refused to take in Muslim refugees. “We don’t have mosques” according to an Interior Minister spokesman, “we only want to choose the Christians.”  Bulgaria is refusing refugees from Muslim countries  so that the country’s ethnic balance remains intact. Bulgaria which already as a substantial population of Muslims is 59.6% Christian and they prefer to keep it that way.

Unfortunately, Islamists will not find it difficult to conquer Western Europe where Christianity has virtually ceased to exist. The spirit of secular relativism that originated from the French Enlightenment (Illuminati) has persuaded Europe, including Europe’s churches, to commit a protracted, two centuries long suicide, the symptoms of which were visible in Communism, National-Socialism and moral relativism in general. And, unless Western Europe rediscovers its will to survive, and it may already be too late, Islamists may soon be holding sway in much the same way as the Taliban did over Afghanistan, removing all visible remnants of pre-Islamic culture.

While we are not in the same situation as Europe, at least not yet, there are many who would love to take us in the same direction. These people don’t believe in the shared American values that have made this country great – liberty, independence and personal responsibility.   Instead, they believe that multi-culturalism and diversity are the most important values and that every culture and belief is as valid as any other. They turn a blind eye to the destructive outcomes of open borders, unregulated immigration and multiculturalism.  If these people are allowed to do to us, what their European counterparts have done, it will only be a matter of time before we’re in the very same situation.

“A liberal-democratic society based on individual rights, freedom, and the rule of law cannot indefinitely accommodate non-liberal or illiberal demands from immigrant groups without subverting its own culture.”   Professor Salim Mansur, University of Western Ontario

← Let Them Kill Each Other In Jail
Honor Saluting Honor →