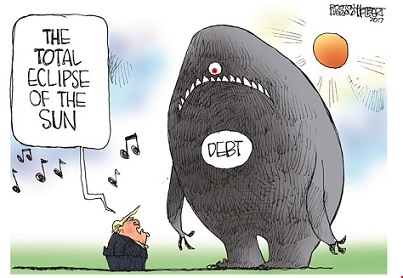 Recent data from the U.S. Treasury shows that the government has amassed $84.3 trillion in debts, liabilities and unfunded Social Security and Medicare obligations, or $670,000 for every household in the U.S. This fiscal burden equals 93% of the nation’s private wealth, including the combined value of every American’s assets in real estate, corporate stocks, small businesses, bonds, savings, cash and personal goods like automobiles and furniture.   While $84.3 trillion is bad, it is only the tip of the iceberg.

The federal budget, which is the government’s primary financial planning and control tool, is not bound by accounting rules that are imposed on the private sector. In the words of the U.S. Treasury, the federal budget is prepared “primarily on a cash basis,”  meaning that money is only counted when it is received and expenses reported only when they are paid.  The majority of private sector businesses are required to use the accrual accounting method that requires them to count cash as it is earned and liabilities when they are incurred which gives a more accurate picture of their finances.

For example, as federal workers earn benefits, such as pension, healthcare, vacation, etc. accrual accounting would measure these obligations in the year they are earned while the government’s cash accounting does allows them to report these obligations when they are paid which may be next year or decades later in the case of federal pensions thereby impairing the usefulness and integrity of financial statements because future financial obligations are hidden from public view.  When these benefits are included in the financial statements, federal workers receive an average of 15% more in compensation than private-sector workers with comparable education and work experience. Postal workers receive an even greater premium.   The latest Treasury report shows that the government currently owes $7.2 trillion in pensions and other benefits to federal workers and veterans. Paying the present value of these benefits would require an average of $57,000 from every household in the U.S. Yet the vast majority of these liabilities are not even reflected in the national debt.

It is pretty much the same for Social Security and Medicare, aka “pay as you go” programs, because the government mainly funds these programs with taxes from younger workers who don’t receive the benefits until they become senior citizens. In contrast, federal law requires private pension plans to be operated as funded plans, meaning that the private employers must account for the financial obligation as the benefits are earned to ensure that older workers’ pensions are not placed on the back of younger workers.

Actuaries measure the obligations of Social Security and Medicare in several different ways but only one, “closed-group” obligations, approximates the concept of accrual accounting in which the shortfall for all current taxpayers and beneficiaries is measured to reflect the true financial burden or liability being passed on to future generations. These burdens amount to $29.0 trillion for Social Security and $32.9 trillion for Medicare.

The actual shortfall may be worse than reported because Treasury data is based on federal government assumptions that are highly optimistic. For example, Medicare Trustees say the cost could easily be higher than projected because ObamaCare will cut Medicare prices to “less than half of their level” prompting providers to withdraw from the system which in turn will force Congress to raise prices and thereby increase Medicare cost.

Most people do not understand that Social Security and Medicare are not a “contractual right,” meaning that there is no legal right to the funds for the workers who contributed. Social Security is nothing more than a payroll tax on an employee and employer and a welfare obligation for government. In the original Social Security Act of 1935, Congress “reserved” the “right to alter, amend, or repeal any provision of this Act.” Consequently, SCOTUS ruled in 1960 that Congress could change benefits as well, leaving them to the whim of Congress which has cut benefits in the past and will probably do so in the future.

The vast bulk of current and impending federal debt is due to increased spending on social programs like Medicare, Social Security, Medicaid, and food stamps. Under current laws and policies, the CBO projects that almost all future growth in spending will be due to these programs and the interest on the national debt which now stands at $19.9 trillion or 107% of the nation’s gross domestic product. But bear in mind that these figures are based on cash accounting and are not an accurate reflection of the government’s true obligations.