I often wonder: why  do atheists put so much of their time and energy into trying to disprove the existence of God that they claim doesn’t exist? 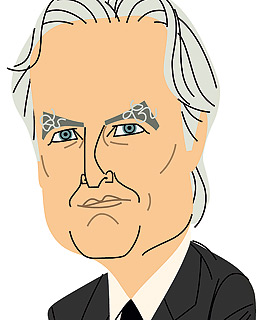 Meet Richard Dawkins, the patron saint of nonbelievers, a self avowed atheist/agnostic  and supporter of the British Humanist Association that works to end the position of religion in law, education, broadcasting and pretty much anywhere it exists.

The Richard Dawkins Foundation prides itself in supporting scientific education, critical thinking and evidence based understanding of the natural world in a “quest” to overcome religious fundamentalism, superstition, intolerance and suffering, because, according to Dawkins, “Despite the best efforts of church leaders and politicians to convince us that religion is still an important part of our national life, polls demonstrate that it is highly irrelevant even to those whose who still label themselves Christians.”  The Foundation works diligently to expose America’s “religious-industrial complex” by investigating the wealth that the churches amass, particularly those involved in the “prosperity” gospel.

In an interview with Playboy, Dawkins described himself as a “tooth fairy  agnostic,” meaning that while he can’t disprove God’s existence, he believes that God’s existence is as likely as the tooth fairy. While Dawkins is willing to admit that there could be some kind of creative intelligence. he isn’t sure what it is.  I mean, “what if you pick the wrong god, what if you get up there and it’s not Jehovah but Baal….”

As for Jesus, Dawkins said that any “evidence he existed is surprisingly shaky.”  He attacks the evidence of Christ’s existence by trying to disprove the validity of the gospels, which according to him were not written until after the Epistles.  “It’s almost as though St. Paul and others. . .weren’t interested in whether Jesus was real.”   Dawkins does praise some imaginary person who he believes wrote the words credited to Christ as being ahead of his time in terms of moral philosophy but the idea that Christ died for our sins, he says is “barking mad.”

Honestly, I’d like to meet the person who gave Dawkins all this wisdom about the New Testament.  Biblical scholars have never been able to agree when the gospels were written.  Some place them as early as 40 A.D. and as late as 69 A.D.  They can’t even agree on which gospel was written first – most believing it was Mark instead of Matthew.  The only thing they seem to agree on is that John was written somewhere between 70 and 90 A.D. with Revelation as late as 95-96 A.D.  As for the Epistles, the majority were written by Paul dating from between 52 to 64 A.D.  The Book of James is actually dated to 45 A.D.

In so far as the validity of Christ –  the record of the life, ministry, death and resurrection of Christ has more evidence and proof than any other person from antiquity.

Dawkins confusion about the New Testament might arise from the fact he has read only “some of Bible but not all of it” although he still insists that  “his knowledge of it is more profound than most fundamentalist Christians.”   He also willingly admitted that he likes the Book of Ecclesiastes because it is “poetry”.  If that is true he must remember reading Ecclesiastes  2-3:  “Be not rash with thy mouth, and let not thine heart be hasty to utter any thing before God: for God is in heaven, and thou upon earth: therefore let thy words be few.  For a dream cometh through the multitude of effort; and a fool’s voice is known by multitude of words.”

In an article at Rolling Stone, Dawkins imparts even more wisdom by letting us know that Isaac Newton was only a Christian because he was born before Charles Darwin; that 9/11 only happened because Christians believed in the “after life;” that  debating Creationists would give them respectability they don’t deserve;”  that “sexual abuse of a child is less damaging than bringing them up Catholic;” that objecting to abortion is “utter nonsense;””  and my favorite – “We are apes, we descended from extinct animals that would have been classified as apes.  We are a unique ape. We have  language. . .”   He also admitted that although he doesn’t shun Christians, his “circle tends to be more intelligent” and “there aren’t any religious people among them. . .”

Anthony Flew, once considered the world’s most influential atheistic philosopher, wrote in his book, There Is A God: How the World’s Most Notorious Atheist Changed His Mind,  that he now believed “there is a God…I now think it [evidence] does point to a creative Intelligence almost entirely because of the DNA investigations. . .”

“The universe and the laws of physics seem to have been specifically designed for us.  If any of about 40 physical qualities had more than slightly different values, life as we know it could not exist.  . .”  Stephen Hawking

Arno Penzias, Nobel Prize winner for discovering evidence that the universe did have a beginning said “The best data we have are exactly what I would have predicted, had I nothing to go on but the five books of Moses, the Psalms, and the Bible as a whole.”

“A fool’s lips enter into contention, and his mouth calleth for blows.  A fool’s mouth is his destruction, and his lips are the snare of his soul.”   Proverbs 18:6-7

← History Tends to Repeat Itself, and it is!
GET BUSY and be READY →