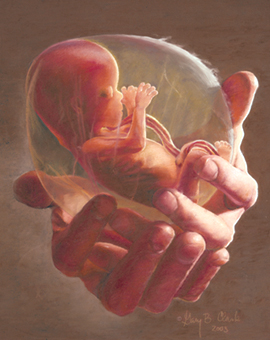 Abortion is not the only legalized medical procedure that murders children in this country. In vitro fertilization (IVF), an assisted reproductive technology, sadly results in the deaths of more children than it does in live births.

In vitro is Latin for “in glass,” and during IVF, egg follicles are removed from a woman and mixed with a man’s sperm in a petri dish with the aim of fertilization. Unfortunately with only a 29.4% success rate once these “in glass” children are transferred into a woman’s womb, doctors are prone to create numerous “in glass” babies for future use.  These are genetically whole human beings, having a material composition and behavior pattern distinct from either parent. Yet in today’s immoral world, once created these children have no one to protect them, no right to life. At the whim of a parent, a doctor, a technician, or even a divorce court judge, these innocent lives can be graded like a chicken’s egg for their viability, genetically tested for their sex, chromosomal abnormalities or possible diseases, graded by their sex or “designer” traits, discarded for their potential flaws or selectively “sacrificed” for the vitality of another “in glass” child in the womb.

Those not used in implantation are preserved in liquid nitrogen to be used later, adopted out, donated for research or terminated. And once adopted by potential parents, due to a complete lack of regulation in the fertility industry, these children still have no right to know who their biological parents are or have any legal access to their genetic medical history.

The Office of Population Affairs estimates there are more than 600,000 children frozen in liquid nitrogen in the U.S.  Children who have died from failed implantation,  those selectively terminated in the womb, those destroyed by technicians, and those not surviving the thawing process is estimated to be about 128,000,

When life is created through IVF, the child is essentially reduced to chattel. In The Technical Child, Kathleen C. Sweeney writes that the IVF process turns a human subject into an object manufactured out of the raw materials provided by a couple.  The child is subjected to quality controls by technicians and the arbitrary decision of others.  He is made subordinate in value to his producers.  He experiences the same degree of domination as used to produce fruit flies and clone mice.  This is inappropriate to the child’s worth and dignity.  It is a dynamic of violence and domination.  They  have become a commodity like any other manufactured good.

At the root of this problem is ethical utilitarianism that ignores the anthropology of the person and of nature and emphasizes mere social consent and utility. Utility itself is defined by those who have the power to define it, to manage consents, to estimate worth. Neither God nor the child is involved. Can the value of a life be judged in such a manner? Can a human person be treated as raw material for technical manipulation?

As for those that argue that a blob of cells is not a person and of no consequences until it takes its first breath, science has now proved what many researchers, scientists and doctors have said all along, that life begins at conception. Life begins with a “flash of light” or “fireworks,” according to scientists at North Western University in Illinois. When sperm meets egg, it causes an increase of calcium and the release of zinc, which radiates out from the egg as it binds to probes and is visible under microscope as a flash or fireworks-type display. According to Teresa Woodruff, director of North Western University’s Center for Reproductive Science, “All of biology, the study of life, starts at the time of fertilization…”

If life does begin at the moment of fertilization, as has been attested to by numerous doctors and scientists, if at the time of fertilization a new life comes into being, what are the implications of murdering an unborn child or destroying a fertilized “in glass” child? Is life merely a concept? Unfortunately, the question for many pro-choice advocates, researchers and scientists is not when life begins but, sadly, when does that life become a human being.

The mechanism by which mammals reproduce has been known for at least the last 150 years, so any biologist in the world can tell you that a mammal’s life begins at fertilization, when the DNA from the father unites with the egg from the mother, resulting in an embryo, by definition, the youngest form of a being. The child’s DNA code will remain unchanged throughout his/her life. When protected and nourished by its mother’s body, the embryo will proceed uninterrupted through its stage of development from fertilization to adult human, one continuous existence.

The fertilized egg can never become anything other than what it is – a living human being, decided at the moment of fertilization and by the end of the 8th week of its existence, an unborn child already has features that are distinctly human, further confirming the child’s humanness. There is no difference between the early person that you were at conception and the person you are now. You were and are still human.

“The underlying premise in the arguments pro-abortionists give against fetal personhood is that non-persons can change into persons. They are saying that a living being can undergo a radical, essential change in its nature during its lifetime. But there is a logical problem here. If the change was biologically inevitable from conception, given time, then this change is not a change in essential nature. This is because if the being naturally initiates the change, it must be in its nature from the beginning to do so. If it is in its nature to do so, then despite any changes in such characteristics as independence, place of residence, physical development, or demonstration of mental ability, what the being is in later life is what the being is from the beginning of its life. This means that if we are persons with the right to be free from aggression later in life, we are persons even at conception.” Dr. Edwin Vieira, Jr.