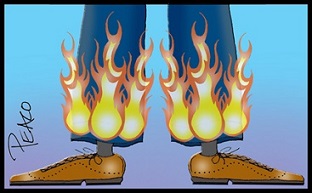 “Political language is designed to make lies sound truthful and murder respectable, and to give an appearance of solidity to pure wind.” George Orwell

Speaking of lies, any politician who tells you there is a Social Security Trust Fund or that Social Security will be available to pay benefits in the not so distant future should be run out of town on a rail.

Unlike “real” trust funds in the private sector that are invested in assets like stocks, bonds, mortgages, etc., to earn income for future retirees, Social Security taxes go directly to the U.S. Treasury to vanish into the general funds and spent on anything from aircraft carriers to bridges to nowhere, to funding for researchers that like to watch fruit flies have sex. In reality, that “trust fund” is nothing more than an accounting trick lined with treasury issued IOUs that your children, grandchildren and great grandchildren have to pay back.

Last year the government joyously reported that the “Trust Fund” generated $93 billion in interest but what they failed to mention is that no actual money was involved – the entire $93 billion was in Treasury IOUs. Now they are telling us that the entire Trust Fund will be bankrupt by 2034. How do you bankrupt something that isn’t there? Technically you can’t. Politicians just like to toss out the concept of bankruptcy so that when they cut your benefits you’ll be grateful for what you’re left with.

Estimates of benefit cuts in 2034 or before could be up to 25%, devastating senior citizens whose only income is Social Security but then again, 75% of your benefit is better than zero, right? After all, Social Security benefits are not guaranteed legally because workers have no contractual or property rights to any benefits according to SCOTUS. In two separate cases SCOTUS said that Social Security taxes are just that – taxes, not contributions or savings so benefits paid out are nothing more than a government entitlement program no different from food stamps, welfare or farm subsidies.  Ergo, Congress and the president can change, alter, or even eliminate benefits, at any time.

Social Security was created in 1935 as an innovative form of “social insurance” rather than a welfare program, based on the supposition that there would always be substantially more workers paying into the system than retirees drawing benefits. The retirement age was set at 65 which was the average life expectancy. In 1940 there were 159 workers for each beneficiary. By 1950 the ratio had already declined to 16.5 workers per beneficiary. By 1960 the ratio had fallen to 4.1 and today, there are only 2.8 workers for each beneficiary. Somewhere between now and 2030 that imaginary .8 worker will also bite the dust.

While Congress did raise the retirement age from 65 to 67 in the mid 1990s, their hunger to sustain power and line their pockets on the back of American taxpayers left little desire to alienate the over 60 crowd so, instead of fixing what they knew was a Ponzi scheme, they kept expanding it, with each expansion starting another Ponzi cycle.

Just to make  Social Security solvent for the next 75 years would require that Congress raise the payroll tax to 14.98% on the first $118,500 of wages while cutting benefits by 16%, or some combination of the two. Can you really see politicians campaigning on those figures? The white headed activists would wipe the floor with them.  And it only gets worse. Medicare Part A, which covers hospital costs for seniors, will run dry by 2028 due to lower than expected payroll taxes and higher than expected costs, forcing cuts of 13% by 2028, and 21% by 2043. If doctors are turning away Medicare patients now because of low reimbursement rates, imagine what it will be like in 2028.

According to Dave John, former Senior Research Fellow in Retirement Security & Financial Institutions, there are only three real solutions to fixing this fiscal crisis: raise taxes, reduce spending, or make the current payroll taxes work harder by investing them through some form of personal retirement account (PRA) to give future retirees a chance to build and control a retirement nest egg. The only part of that solution that I can foresee Congress embracing is higher taxes.