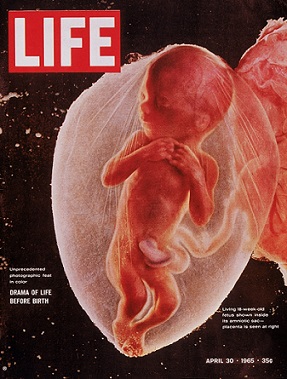 What does late term abortion actually mean? In response to the House’s vote to ban most abortions after 20 weeks, Robin Marty, in an article at Cosmopolitan, rants that since there is no specific medical definition for late term abortion, pro-lifers are using the term to mean whatever they want. She further argues that the use of the term “late” is medically “inaccurate” because some medical textbooks only refer to “late-term” as those that have reached “41 weeks plus.”

“Early” and “late” are entirely relative terms but it is a rare person who believes any abortion that involves ripping limbs off a living baby with all his organs and features fully developed is anything but “late,” is anything other than murder.

The most depressing thing about this debate is that it is even happening in the 21st century when medical advances have proven that life begins at conception, that the unborn as early as 22 weeks gestation routinely survive.  But the left, attempting to control the debate, are clever at controlling the language.

Pope John Paul eloquently identified this phenomenon in Evangelium Vitae when he wrote: “…Woe to those who call evil good and good evil, who put darkness for light and light for darkness. (Is 5:20). Especially in the case of abortion there is a widespread use of ambiguous terminology, such as ‘interruption of pregnancy’ which tends to hide abortion’s true nature and to attenuate its seriousness in public opinion. Perhaps this linguistic phenomenon is itself a symptom of an uneasiness of conscience. But no word has the power to change the reality of things – procured abortion is the deliberate and direct killing, by whatever means it is carried out, of a human being in the initial phase of her or her existence…”

Everyone one of these phrases is nothing more than a clever euphemism designed for one purpose and one purpose only – to divert your attention from the murderous act of terminating the life of another human being.  In a late term abortion, the mother, and I use that term loosely, is induced, the baby partially delivered with the head still inside the birth canal. At this point the murderer punctures the skull of the living child and vacuums out his or her brains before delivering the corpse that is usually tossed into the trash.

Language matters. If the media actually used the actual procedure rather than smoke screens and euphemisms, I doubt there would be much debate. When we speak of abortion let us call it by its rightful name – legalized murder.

Any abortion that takes place after the moment of conception is a “late term” abortion. When it comes to the intrinsic value of a human being, there is no “early” or “late.” A ninety year old has no more innate human dignity or right to life than a one year old, or an unborn human being at 10 weeks gestation, or a baby at conception. To murder any one of these is to destroy a universe unto itself: an autonomous, individual, utterly unique human person with an immortal soul created by God.

“If you stand with the defenseless, with the voiceless, you have to stand with little babies. Don’t talk to me about cruelty in our bill, when you look at little babies being dismembered, feeling excruciating pain, if we can’t stand to defend these children, what do we stand for in this institution? Congressman Sean Duffy

What indeed do we stand for?