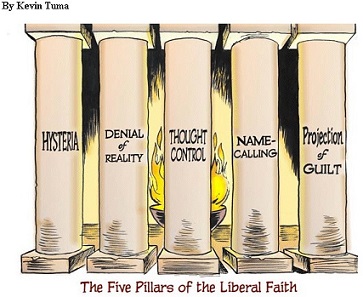 “If Americans don’t have the freedom to call a man a man, then we have no freedom at all.”

Of all things that stand in the way of progressivism, reality has always topped the list. Every progressive program, system or scheme has failed to make the world a better place because, let’s face it, the world isn’t a better place. In concept, Socialism might work if only people weren’t motivated by self-interest. Feminism might have made women happier if only men and women didn’t find each other’s distinctiveness attractive and enjoyable. Diversity would have brought us strength if only we all thought the same thing about everything.

Once youthful idealism passes and real-world experience accumulates, a person is left with only two options – to reorient their ideology towards reality or reorient realty to their ideology. Of course choosing the latter option is dicey because our ability to actually manipulate the world is limited. And when those limits are reached, fantasy will necessarily have to pick up the slack.  While western affluence affords significant room for indulgence in fantasy by delaying the most serious repercussions for a time, fantasy still remains a very fragile thing and reality retains an uncanny ability to fracture it. But try as one might, reality always hunts us down in the end. As Sartre puts it, “Hell is other people,” and you can’t avoid them all the time.

America’s bizarre controversy over which men are allowed in women’s bathrooms has become a hot topic once again.  Obama put the nation’s public and private schools on notice that unless they wanted to lose federal money and undergo federal investigations, none could set policies forcing men to use men’s rooms and women to use the little girl’s room.  Left-wing nut fantasy warriors  like Obama are fully committed to forcing Americans to act as though a blatant falsehood is true, that men can be women and women can be men. This is where private fantasy becomes a public hazard because such measures always bear a heavy cost, a cost George Orwell explored in his science fiction novel “1984.”

Now that Trump’s Justice Department  has lifted Obama’s “order”, the left-wing nuts are once again out in full force.  No one is saying that  people who don’t know what sex they are don’t have a right to use a bathroom – only that they have no right to invade the privacy of people who know what sex they are.  In many ways, who goes into which bathroom is a trivial matter, unless of course we’re talking about children.  However, it simultaneously entails an act of submission to fantasy that cuts to the core of our humanity. Few words are more central to who we are as human beings than “man” and “woman.” The existence of humanity literally depends on recognizing the two and rightly understanding their distinctiveness.   If gender were in reality fluid, then “men” and “women” become meaningless terms.

The ramifications of this fantasy go far deeper than just bathrooms. By embracing the fantasy you are kowtowing to governmental and social pressure and that alone bears a heavy burden. While for many the mere threat of bearing a label ending in “ist” or “phobe” is sufficient to force them into the fantasy, those who possess character and conviction are made of sterner stuff.

Our only viable path toward resisting this blossoming tyranny of thought is to deflate that fantasy with reality.  It is not time to compromise, for our opponents are uncompromising. Those who desire freedom need to believe, teach and confess that their delusion is not based on the reality that men and women cannot change the biological sex into which they were born. After all, which is more disrespectful: to tell a man claiming he is a woman that he’s wrong or to imply behind his back that he’s only making noises when he thinks he’s speaking?

No one likes to hear they’re wrong and piercing fantasy does hurt, but it does not harm or dehumanize the way the left’s fantasy does. Reality is a compassionate choice, the one in which we recognize that men and women are different in ways that go far deeper than how we feel.

“…Reality is not external.  Reality exists in the human mind and nowhere else.  Not in the individual mind, which can make mistakes, and in any case soon perishes; only in the mind of the Party, which is collective and immortal.  Whatever the Party holds to be truth is truth.  It is impossible to see reality except by looking through the eyes of the Party…”  George Orwell, 1984

You can read War Is Peace; Freedom is Slavery; Men are Women by Matthew Cochran in full at this link.

← Render Unto Ceasar?
How Tyranny Rises and Freedom Falls →