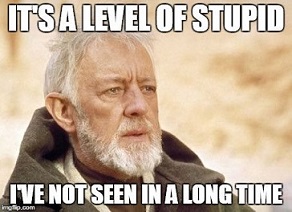 Intersectionality is, according to the web, a study of overlapping or intersecting social identities that link themselves to systems of oppression, domination or discrimination.  In reality, it is a “theory” that began with the Marxist-feminist critical theory movement back in the 60s and 70s which explains why it is now being used by academia and other social justice movements as a weapon.  However, if one translates intersectionality from its leftist definition, it literally means that everything is interrelated as long as it can be blamed on Jews, Christians, Conservatives or white males in general.

Every wondered why Black Lives Matter activists carry signs “Justice from Ferguson to Palestine?” Or why Black Lives Matter cofounder claims that blacks “bear the burden of state sponsored Darwinian experiments” that “squeeze” blacks into “boxes of normality defined by white supremacy.”   Why is the National Women’s Studies Assoc. endorsing a boycott of Israel to condemn the “sexual and gender-based violence perpetrated against Palestinians; ” or why does Jewish Voice for Peace attempt to link Palestinian issues to the “struggles of students of color, victims of sexual assault, and those who fight against imperialism, racism, police violence, etc?”  For that matter, why does Vassar offer a course that relates the “Palestinian struggle to the black struggle for liberation?” Or why is a Rutgers professor of “gender/queer studies” [really?] accusing Israel of harvesting Palestinian children’s organs for research?

Proponents of intersectionality see a world of all-encompassing oppression, where racism, classism, sexism, homophobia and ableism rules; a world where real or perceived injustices are interconnected. Uniting “oppressed” groups, the theory goes, strengthens them against the dominant “white power structure.”  This helps explain, in part, why in January of this year the National LBGTQ Task force chose to ally themselves with Palestinians who regularly execute gays, rather than with Israel, the only Middle Eastern country to protect the rights of the homosexual community, and why women’s rights groups champion Palestinian society where honor killings and violence against women is the norm. To these nuts, the Palestinians are noble people of color struggling against Western imperialistic injustices [Whites, Christians, Conservatives and Jews]. Treating women as chattel, beating or murdering gays, having child sex slaves, or discrimination against blacks are mere “inconvenient facts” that can be overlooked as morally justified in the Israel-hater looking glass world.

In their multicultural victimhood white, wealthy, cis-male and the collective Jew are inherently evil, while third-world people of color, women, homosexuals and Palestinians are automatically good.  To these sanctimonious social justice warriors, Jews are now part of the oppressor white privileged class that must be beaten into submission to Islam.  And to this end, the anti-Israel BDS campaigns have successfully injected the Palestinians as victims of colonialist oppression by pro-Western Israel.

Academic material that is being used by the BDS Movement on American campuses and in left-wing churches to squash Israel is being created and funded by Arab states like Saudi Arabia and Iran via Aramco World and Alevi Foundation.  The Saudi government has created  think tanks and mega-research centers at respective American universities including Ivy League schools such as Harvard in which to bash Israel.  Certainly there could be no bias against Jews from the Arab world!

But they are not the only ones.  The New Israel Fund and its political lobbying organization, SHATIL, with more than $1 million in grants from the U.S. State Department under a program designed to create political change, reform and activism in the Middle East, has knowingly financed groups that support the BDS movement and have worked to have Israeli soldiers prosecuted for perceived war crimes.  Additional funding comes from numerous church-based NGO’s, European nations, Oxfam International and even from the Palestinian Humanitarian Services fund.   The BDS movement is little more than a manifestation of anti-Semitism.

The Intersectionality theory claims to stand for justice but what it actually stands for is prejudice against Jews, Christians, Conservatives and whites.  They wave the flag of freedom but only to cover up their own intolerance.  They hide behind the banner of a fair and free society but preach one of racism and xenophobia.  They need to be seen for what they are.