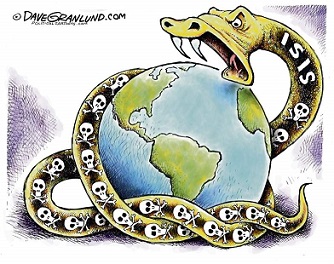 “The theory that our religion is a peaceful and loving religion is a wrong theory. The Holy war as it is known in Islamic jurisprudence is basically an offensive war, and it is the duty of all Muslims of every age…because our prophet Muhammad said that he is ordered by Allah to fight all people until they say ‘No God but Allah,’ and he is his messenger. It is meaningless to talk about the holy war as only defensive, otherwise, what did the prophet mean when he said, “from now on even if they don’t invade you, you must invade them.” Islamic scholar, professor Shaykh Muhammad Sa’id Ramadan al-Buti

Everyone wants peace but when negotiating with other cultures it’s a good idea to make certain you’re on the same page.

Peace in Islam means submission to Allah. In other words, the ultimate meaning of Islamic peace is the world living in Dar-al-Islam, the house of submission. That is not by any means a radical interpretation. Modern-day Islamic scholar, Ibrahim Sulaiman, says submission and peace can be very different concepts, even if a form of peace is often brought about through forcing others into submission. He also claims jihad is not inhumane because the ultimate end of the “necessary violence and bloodshed” is “peace protected by Sharia law.”  These ideas are foreign to us in the West. But that does not make them any less true or binding on those who believe. To shrug them off is to underestimate Islam.

Islamic peace is a concept that most left-wing politicians refuse to examine just as they refuse to admit that today’s terrorism is overwhelmingly Muslim, or that its roots pervade the Muslim world. While the perpetrators involved in Fort Hood, Boston, San Bernardino, Chattanooga, and Orlando came from various backgrounds and claimed allegiance to different Islamic groups, they were all united by the same ideology.

According to Princeton Islamic expert Bernard Haykel, the politically correct liberals and embarrassed Muslims alike who denounce the religious ties behind terrorism have a “cotton candy view” of the faith that willfully ignores what Islam “has historically and legally required.” Jihadist who participate in beheadings, crucifixions and slavery are not following some corrupted version of Islam rather, they are faithfully reproducing its norms of war,” established in the Quran and advanced by Muhammad. The failure to recognize this connection makes Islamic terrorism and its operatives incomprehensible to the modern mind.

“Muslims [and western apologists for Islam] can reject the Islamic State, writes Wood, but pretending that it isn’t actually a religious, millenarian group, with theology that must be understood to be combated, has already led the U.S. to underestimate it and back foolish schemes to counter it.

One of the foremost schemes is to ignore and obfuscate any connection Islam has to the barbarism done in its name by using politically correct substitutes like “domestic terrorism,” “violent extremism,” “workplace violence,” and “lone wolf” attacks according to Regis Nicoll in his article The Enemy That Won’t be Named. Another is to deny the connection by expunging public statements to the contrary by the perpetrators and characterizing such as radicals, extremists, and crazies acting against the “true” reading of Islam and independently from any known terrorist group.

This scheme, along with the military half-measures it sires, has proven and will continue to prove ineffective against the War on Terror. That’s because – channeling James Carville – “it’s the ideology stupid!” And the only way to defeat an ideology is with a better ideology.

Sadly, victory will be difficult for a country that has become ignorant, if not embarrassed, about the extraordinary ideology of its founding, a founding that for over 200 years has caused citizens of the world to look to it as a beacon of freedom, equality, and opportunity.

“Real peace is, after all, a collective agreement to live and let live. Only when two peoples mutually decide to make that a heartfelt goal can it exist, and without that basic realization all the schemes and negotiations, all the promises of land for peace, territory swaps, redrawn borders and the like are just a prelude to another round of conflict. Or to put it in even simpler terms, real peace comes when the cost has been so great for the aggressor that resorting to hostilities again for anything other than an existential threat is almost unthinkable. Because, in the end, real peace is the fruit of a decisive victory.” Rob Miller, What Does Peace Mean Anyway?, American Thinker