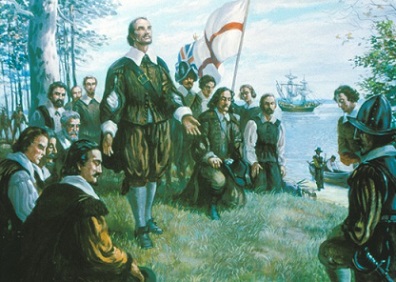 One year before the Pilgrims landed at Plymouth and two years before the fabled Pilgrim’s feast, the first American Thanksgiving was held in Virginia at Berkeley Hundred, about twenty miles upstream from Jamestown on December 4, 1619, by thirty eight English settlers who after ten weeks at sea, fell to their knees to thank God for their safe arrival. The Charter of Berkeley Hundred stated: “We ordain that the day of our ships arrival at the place assigned for plantacon in the land of Virginia shall be yearly and perpetually kept holy as a day of thanksgiving to Almighty God.”

The name FIRST given to the territory occupied by the present day United States was Virginia. On May 13, 1607, the Sarah Constant, the Good Speed and the Discovery arrived at Jamestown on the James River establishing the countries democracy through jury trial, popular elections in which “all” inhabitants could vote, and a representative Assembly that met July 30, 1619, and digested the very first laws for the new commonwealth.

It was Virginia’s first governor, Sir Thomas Gates, that drove the French away from Maine and Nova Scotia allowing the England colonization of the shores of Massachusetts and Connecticut.  It was two ships from Jamestown that saved the Plymouth settlers in 1622 from starvation.

Virginia led in all the measures that established the independence of the United States. Beginning with the French and Indian War, out of which sprang the taxation measures that subsequently provoked the American Revolution, Virginia, under the leadership of George Washington, shed the first American blood in the war to defeat the French. It was the Colony of Virginia that rang “the alarm bell” and rallied all other colonies against the stamp act by the celebrated resolutions of Patrick Henry on May 29, 1765, bringing about its repeal. It was the leadership of Washington that brought about the surrender of the British at Yorktown, Virginia, not far from the original settlement at Jamestown.

Virginia called the Annapolis Convention in 1786 that sent to the Federal Convention at Philadelphia its chief constructor, James Madison, who has been aptly described as the Father of the Constitution. Virginia also furnished the two greatest rival interpreters of its powers – Thomas Jefferson and John Marshall, and gave the Union its first President – George Washington.

Through explorers, generals and presidents, Virginia made the Union a continental power. It was Patrick Henry and George Rogers Clark who affected the conquest of the Northwest Territory, which eventually added five new states to the Union. It was Meriwether Lewis, born in Albemarle County, Virginia, and William Clark, a Virginia native, that made the first thorough exploration of the West. Louisiana, Florida and Texas were added to the Union by Virginia Presidents – Jefferson, Monroe and Tyler. Nor can it be forgotten that the entire far West was the result of the annexation of Texas by Tyler, indirectly leading to the Mexican War, whose success was assured by two Virginia generals – Zachary Taylor and Winfield Scott.

It was a Virginia President, James Monroe who gave us the Monroe Doctrine, which has regulated to this very day, the relations of America to the nations of Europe and the rest of mankind. “America for Americans,” he said in substance.

Not only did Virginia have the first legislative Assembly, which rested for more than a hundred years on universal suffrage, she was the headquarters for the great Democratic-Republican party under the leadership of Thomas Jefferson. This party was the champion of the popular idea against the aristocratic notions of the Federalists headquartered in New York. By destroying the Federalist Party Virginia sowed the seeds of democracy throughout the U.S.

Virginia was the first State to impose a penalty for engaging in the slave trade (1778). In the Federal Convention of 1787 Virginia’s delegates bitterly opposed the provision in the Constitution supported by the Puritan delegates from New England, that permitted the slave trade.

The seeds of religious freedom were also sowed in Virginia. The Declaration of Rights of Virginia, drawn by George Mason in 1776, placed the principle of religious freedom, for the first time, upon a truly philosophic basic. Virginia became the FIRST State to proclaim absolute equality and freedom of religion to the people of all faiths – Christians, Jews, Mohammedans, etc. The principle enunciated by Mason was enacted into law by Thomas Jefferson, whose bill for Religious Freedom in 1785 invested conscience with the wings of heaven.

Thomas Jefferson also furnished the ideals of popular education through laws for educating the poor, and established and financing William and Mary College. It was a bill of Thomas Jefferson in 1779 that set the established gradations of schools, beginning with primary schools and ending with the University that furnished the real ideal on which the public school system rests today.

It was a Virginian, James Rumsey, who first demonstrated in 1786 the possibilities of steam as applied to a river boat, and Cyrus Hall McCormick who revolutionized agriculture with his invention of the reaper. And Matthew Fontaine Maury who furnished the plans for laying the Atlantic Cable, and became known as the father of the modern science of torpedo and mine laying. It was Virginian Walter Reed of Gloucester County who was foremost in discovering the cause of yellow fever.