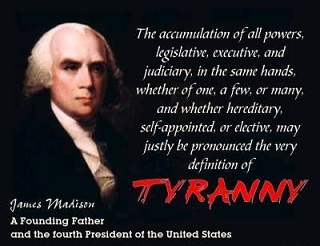 In the original Greek, the word from which demagogue is taken is a compound word formed from the Greek word for people and a word derived from the verb meaning “to lead.”  A demagogue was a leader of the people.

Pure and direct democracies established in ancient times perished because ambitious leaders purposefully fanned the fires of public passion.  They encouraged the people to act like tyrants, approving laws and policies that sated their passions at the expense of right and justice.  Having turned government into an instrument of the people’s tyrannical will, they roused the anger of the people against any who, by opposing the government, opposed the “people’s” will.

When opponents showed signs of resisting or defending themselves, the demagogues exaggerated or fabricated violent incidents to rouse public fear and outrage.  Then, using the excuse of public security, they gathered armed forces under their control.  First to attack those they identified as enemies of the people, and then to identify and attack the people themselves as the enemy.

Our founding fathers, students of ancient history, were familiar with both Autocracy and Democracy, and with fixed principles in mind, defined a representative Republican form of government, hoping to prevent this new county from falling prey to demagoguery.  Alexander  Hamilton, Federalist #1, wrote that “. . .of those men who have overturned the liberties of republics, the greatest number have begun their career by paying an obsequious court to the people; commencing demagogues, and ending tyrants.”

There are distinct differences between a Democracy and a Republic.

In a Democracy, the majority rules (Mobocracy)  whether based upon deliberation or governed by passion, prejudice, and impulse without restraint or regard to consequences.  A Democracy is destructive of liberty because there is no law to prevent the majority from trampling on individual rights.  A perfect example of a pure Democracy would be a lynch mob – with the only dissenting vote cast by the person at the end of the rope.

About two centuries ago, Professor Alexander Fraser Tyler wrote that “A Democracy cannot exist as a permanent form of government.  It can only exist until the voters discover they can vote themselves largess out of  [the] public treasury.  From that moment on the majority always vote for the candidate promising the most benefits from the public treasury with the results that Democracy always collapses over a loose fiscal policy, always to be followed by a dictatorship.”

Unfortunately today the left is making attempts to alter political history to fit a left-wing agenda to brainwash our children because the key to the demagogue’s success lies in the rhetoric with which they appeal to some overt standard of righteousness in order to further their agenda.  Deploying the power of partial truths, the skillful demagogue only pretends to satisfy the requirements of conscience.  He pulls people into a whirlwind of political activity fueled by righteous  passion, far beyond the influence of reason, (such as the Occupy Wall Street movement).

In the context of civil society, people are drawn together by the influence of unbridled passion, or what James Madison called a faction “a number of citizens, whether amounting to a majority or minority of the whole, who are united and actuated by some common impulse of passion, or of interest, adverse to the rights of other citizens, or to the permanent and aggregate interests of the community.” (Federalist #10)  It is on account of this “faction” that direct rule by the people is inclined to develop into some extreme of tyranny.  And, tyranny, once established, achieves order by ignoring right, maintains control by subverting justice, and enforces the peace of terrified submission by fomenting a perpetual state of war against the person or minds or spirit of the people subjected to it.

It was for this very reason that our Founding Fathers instituted, not a direct democracy, but a Republic, whereby citizens would elect a representative that would care more for the common good, or as Madison suggested,   “a chosen body of citizens, whose wisdom may best discern the true interest of their country, and whose patriotism and love of justice will be least likely to sacrifice it to temporary or partial considerations.”

And, while this has not always been the case with our elected representatives,  it is still a much better system than mob rule.   A demagogue promotes only his own agenda and ambition by skillfully manipulating the passions of the people and if we do our job by voting for the right person, we have an elected representative that reflects our character and our will in his leadership.

Where a Republic is concerned, elections are not about choosing those who will lead us.  They are about choosing those who will, with integrity, do their best to follow our lead, reflecting in their tenure of office the character, will and intention of the people who elect them.  But, can people with no character choose another to represent their character?  Can people unclear in their intentions choose another to carry them out?  Can people who refuse to be responsible for their own will, demand that another respect what they do not?  Representation is not just about choice, it is also about deliberation and responsibility.

When people let their passions choose for them, demagogues lead them to tyranny.  When they choose for themselves — conscientiously, deliberately, responsibly  —  their representatives will be led to preserve the good they choose to cherish.

You can read “Demagoguery vs. Representation” by Alan Keyes at this link.  Dr. Keyes served in the Reagan Administration as Assistant Secretary of State for International Organizations and as Ambassador to the U.N. Economic and Social Council.  He holds a Ph.D. in government from Harvard where he wrote his dissertation on Constitutional Theory.

← God’s Love for a Red Headed Harp Player
United States Is Not the Savior of the World, Nor Is She Intended To Be →