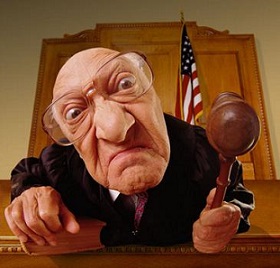 “There is no crueler tyranny than that which is perpetuated under the shield of law and in the name of justice.” Charles de Montesquieu

The Constitution’s “checks and balances” were designed to prevent any one branch of government from becoming too powerful and running roughshod over the other branches.

Thomas Jefferson wrote in 1823 that “at the establishment of our constitution, the judiciary bodies were supposed to be the most helpless and harmless members of the government. Experience, however, soon showed in what way they were to become the most dangerous; that the insufficiency of the means provided for their removal gave them a freehold and irresponsibility in office; that their decisions, seeming to concern individual suitors only, pass silent and unheeded by the public at large; that these decisions, nevertheless, become law by precedent, sapping, by little and little, the foundations of the constitution, and working its change by construction, before any one has perceived that invisible and helpless worm has been busily employed in consuming its substance. In truth, man is not made to be trusted for life, if secured against all liability to account.”

Not much has changed. We still have rouge judges who reflect the disintegration of the Constitutional order they swore to uphold. When there is no order, everything is possible and judges become tyrants.

Many think that the Constitution only consists of the legal document crafted by the Founders, ratified and amended over time. However, a constitution is more than a document. It is a body of doctrines, customs and practices that comprise the fundamental organizing principles. It relies upon unwritten concepts based on English common law that goes back some 800 years and thus reflects many institutions, laws and customs, written and unwritten, developed over the centuries that form the fabric of social reality and sustain the formal constitution. When those supports are broken, the constitutional order suffers.

Our Constitution is also based on divine and natural law. Both Sir William Blackstone and Sir Edward Coke, the ultimate authorities on the English common law adopted by America, state that our Constitution is strongly influenced by higher law as summarized by the Ten Commandments, a higher law that Blackstone defines as “binding over all the glove, in all countries, and at all times: no human laws are of any validity, if contrary to this.”

The crisis facing today’s judiciary is fundamentally constitutional and of unprecedented gravity. It is not just a problem of rogue judges overextending their power – the problem lies in the destruction of the foundational prions of American law and society.

For decades the entire legal tradition regarding social institutions has been challenged as reflected in decisions on moral issues like abortion, pornography and homosexual marriage. The stable nature of the law has been replaced by the concept of a “living” evolving constitution that changes with the liberal whims of those who interpret it. The higher law tradition has been abandoned so that morality is no longer objective but reflects the relativistic and permissive whims that dominate our culture.

The concept of ordered liberty, so prized by our Founders, has now been replaced by the concept of autonomy of every individual to ultimately judge what is right and wrong. This denial of moral limits can be found in the SCOTUS decision, Planned Parenthood of Southeastern Pennsylvania v. Casey, in which Justice Anthony Kennedy enlightened us with his concept of morality: “At the heart of liberty is the right to define one’s own concept of existence, of meaning, of the universe, and of the mystery of human life.”

An atmosphere in which all is permitted destroys the notion of restraint inherent to law. The idea of a living, evolving constitution demolishes its certainties, the inevitable consequences of which can only serve to fragment a once united nation, thus making judicial tyranny possible.

In such a backdrop, judges reign supreme, holding our nation hostage, abusing the law to enforce their distorted interpretations, accountable to no one.

“Logic, no matter how pretty and neat, reason, no matter how seemingly profound and deep, does not necessarily produce truth, much less justice. Logic and reason often become but tools used by those in power to deliver their load of injustice to the people. And ultimate truth, if, indeed, it exists, is rarely recognizable in the endless rows of long words that crowd page after page of most judicial regurgitation.” Gerry Spence

← Sen. Mike Lee Right to Be Leery of Feldblum
Biggest Crisis No One’s Talking About →