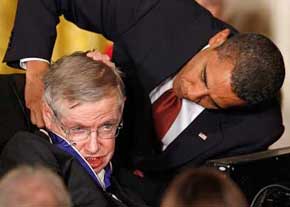 Mona Charen reported in 2013 that Stephen Hawking,  the world-renowned physicist and celebrity, had joined the left when he cancelled a planned trip to Israel to participate in a conference sponsored by Israeli President Shimon Peres.  Hawking’s explanation: “I have received a number of emails from Palestinian academics.  They are unanimous that I should respect the boycott.  In view of this, I must withdraw from the conference.”

By what inverted moral calculus does someone of Hawking’s stature find it sanctimoniously problematic to set foot on the soil of the region’s only democracy?

Did he not visit the Soviet Union in 1973, back in the old days of Brezhnev, when uprisings for freedom in Hungary and Czechoslovakia were ruthlessly suppressed, the KGB inspired terror and scientists who displeased the regime were packed off to the Gulag?  Hawkins also set foot on Iranian soil in 2007 for the International Physics Olympiad – his conscience apparently untroubled by the stoning of women accused of adultery, imprisonment without trial, tortured and  persecution of religious and ethnic minorities – to say nothing of arming terrorists and threatening to wipe countries off the map.

There is no shortage of nations richly deserving of boycotts and other forms of pressure.  Atrocities against civilians, including children, are a daily occurrence in the Democratic Republic of Congo.  China, Cuba, Vietnam, Somalia, Mali, Sudan, Saudi Arabia, Egypt, Pakistan, Myanmar, Kyrgyzstan, as well as the above-mentioned Russia and Iran.  Many other left-wing dictatorships and Muslim ruled nations oppress their populations, flout human rights, disdain judicial procedures and muzzle the press, yet we have yet to see a worldwide boycott movement against any of these nations.  Some have been sanctioned by the U.N., or in the case of Cuba, boycotted by the U.S., but only Israel is singled out for the boycott by private organizations and individuals.

What do the advocates of this boycott think they are expressing?  Disapproval of Israel’s settlement policies perhaps?   Sorry guys, the boycott  of Jewish businesses by the Arab states actually predates the creation of the state of Israel. The Arab League formally adopted a blanket boycott after Israel achieved independence in 1948 — long before the West Bank had come under Israeli sovereignty.

The wording of the Palestinian “Call for Academic and Cultural Boycott of Israel” lists “responsibility for the Nakba” as the first indictment.  Nakba is the Palestinian term for Israel’s birth — it translates as the “catastrophe.” In other words, Israel’s first crime had nothing to do with territory, occupation, or the “peace process.” The first crime was the nation of Israel being reborn.  Israel as a Jewish state remains anathema to the Palestinian community. This is a top-down attitude, communicated on a constant basis by Palestinian Authority.  Their refusal to recognize Israel as a Jewish state is based on the continued denial of any historic Jewish connection to the land.

They now refuse the Trump peace plan because they claim it doesn’t force Israel to give in to all Palestinians demands.  Requirements for consideration of any peace plan remains as unrealistic as ever. Hamas specifically is demanding that millions of Palestinian (Arabs, Egyptians)  be allowed to enter Israel at will and that Israel withdraw to indefensible borders that would put terrorists organizations like Hamas closer to Tel Aviv.  Unlike the Palestinian Authority, Hamas is clear and consistent about their goals of never giving non-Muslims any claim to the Holy land.   Abbas and Hamas continue to insist that they will accept nothing less than a sovereign and independent Palestinian state with Jerusalem as their capital.

The left continually compares Israel to apartheid South Africa.   Apartheid, colonial wall  – really?   Israel is home to 1.6 million Arab citizens, which is about 20% of the population.  There is no such thing as second-class citizenship.  Arabs participate fully in Israeli life. There are Israeli Arabs in the Knesset, on the Supreme Court, in the Foreign Service, in the media, in the police force and even in the army.  How many Jews serve in prominent posts in Muslim countries?

As for the “racist, colonial wall,” the left likes to throw in our face, I would remind sensible Americans that Israel responded to sustained terror attacks, not by curtailing civil liberties, not by revenge attacks on Palestinian civilians, and not by reoccupying territory ceded to the Palestinian Authority but by building a wall.  That was too much for the likes of Hawking — which gives you the measure of the man and the movement he embraces.

What is it about Israel that brings forth ill will from the left?  Alan Dershowitz once wrote an article describing a visitor from another galaxy who comes to earth, spends several weeks visiting major American colleges and universities.   At the end of his tour, the visitor would learn that of all the nations of the world, other than the one he is visiting, only one is subject to a divestment effort for a university’s endowment, only one is viciously described in literature regularly distributed to students on campus, and in essays and editorials in college papers and magazines, and only one discussed in classes across the humanities curriculum with relentless rebuke and scorn.

And this country is not, say Sudan or Nigeria, Iran or Iraq, where millions have died in vicious civil wars perpetrated for the most part by Muslims against Christians, or other Arab countries that still practice slavery.  Nor is it  Saudi Arabia where women have no rights and those who try to practice a religion other than Islam are arrested or expelled, or the Palestinian territories in which homosexuals, real or imagined, are tortured or mutilated in the same way as captured Israelis.  It is not, in fact, any of the dozens of other unsavory places on the planet that provide little or no freedom to their citizens as they ruthlessly exploit their country’s workers and resources for the benefit of the ruling elite.   This much maligned country is, of course, Israel.

The left is reflexively anti-Israel and has established important beachheads in significant American institutions— academia, the media, the entertainment industry, and the old line Protestant ‘high’ churches, as well as in the very seats of government power in many Western European countries, and their intelligentsia. It is not surprising that Israel seems unable to get a fair shake.  Being anti-Israel has become part of their religion.

You can read Richard Baehr’s “Why Does The Left Hate Israel” at this link.