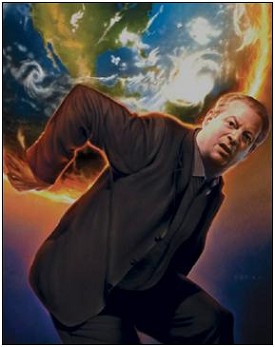 Big Al Gore and his chicken little followers are once again pushing the idea that climate change is real.  As far as these control freaks are concerned, YOU MUST NOT QUESTION that “settled” fake science or pretend policy consensus.

“It is time once again to steer by the stars,” the failed presidential candidate said, time to “listen to  Arctic scientists, to take the evidence that is so compelling and say we’ve got to act, we’ve got to stop using the atmosphere as a sewer, we’ve got to save and stabilize the conditions that will continue to give rise to the flourishing of humanity.”   In other words, you must check your brain at the door and obey the dictates of the powers that be.

The world already knows that Big AL is a hypocrite.  While preaching that everyone tighten their belts and live frugally, Big Al lives in an enormous mansion sucking up more electricity in a single month than most households use in a year. And if one mansion wasn’t enough, he has an energy sucking mansion along the Santa Barbara coastline, that he reckons those rising sea levels he has threatened us with for the last decade wouldn’t dare come near the California coast!

Gore flies around the world on private jets and rides around the country in limos spewing those nasty “greenhouse gases” he hates so much while demanding that the peasants fly commercial, if they must fly at all, and park those filthy cars in favor of walking or biking. As the father of four, Gore demands that the peasants stop reproducing to stabilize the world’s population.

After vilifying fossil fuel usage for decades, Big Al didn’t hesitate to sell his unprofitable TV network to Al Jazeera, netting himself a cool $100 million profit. Al Jazeera, by the way, is funded by the government of Qatar which not only receives the bulk of its wealth from those nasty fossil fuels, but funds terrorism with those nasty oil profits.

Moral issues are about how we treat each other, not how the weather treats us. Those like Big Al who espouse grim Biblical projections of droughts, floods and plagues all caused by the hands of industrial capitalists, claim that they are only “speaking up for” the poor, standing against “intergenerational tyranny.” But even if you discount the possibility that these sentiments are reflections of H.L. Mencken’s trenchant observation that the desire to save the world is almost invariably a false front for the urge to rule it, then that still leaves the question of whether catastrophic projections are likely to be true and the policies proposed likely to be effective.

The fundamental “moral” assumption behind all the leftist lies concerning global warming is that fossil fuels are unsustainable and morally bad. But these lies are well challenged in The Moral Case for Fossil Fuels, by Alex Epstein who does an excellent job of outlining the astonishing benefits that the development of coal, oil and natural gas have delivered to mankind: improving health, lengthening lives and facilitating a vast expansion of both material welfare and leisure possibilities.

So, with the exception of the control freaks, closed-minded useful idiots, and the Big Green Machine, everyone knows that fossil fuels power our machines. But often overlooked is the vital role they play in powering humans, as the food we eat is made possible by fossil fuels.  To take just one example, synthesized fertilizers, over whelming made possible by fossil fuels, are the plant-nutrient inputs that feed humanity’s food crops which in turn feeds humanity.

The “dominant share of direct energy used on US farms is fossil fuel (diesel and gas) to run machinery for field operations like planting, tilling, harvesting, to dry crops, for livestock use and to transport goods,” according to the U.S. Department of Agriculture. Abundant and cheap fossil fuel powered irrigation has limited our reliance on rain to water crops and allowed irrigation to be used over vast distances creating the opportunity for a wider variety of cropping alternatives, reduction in frost damage and a higher crop yield to feed the world.

Much of the undeveloped world has to make do with water that might contain high concentrations of heavy metals, dissolved hydrogen sulfide gas and countless numbers of waterborne pathogens that still claim millions of lives each year.   Yet, in the developed world, thanks in part to fossil fuels, we can get clean drinkable water by simply turning on a faucet. Before it reaches your home it goes through a network of plastic (oil) or copper pipes originating from a storage tank made of metal and plastic. And before it even got to the distribution tank, it went through a massive, high energy treatment plant where it was treated with complex synthetic chemicals to remove toxic substances and even before that it was disinfected using chlorine, ozone or ultraviolet light to kill of any harmful biological organisms.

The idea of using fire to routinely heat our homes and cook our food; of breathing in enormous amounts of smoke on a daily basis, is foreign to most of us. Modern homes are heated with advanced furnaces, either via clean-burning natural gas, in which the furnace has an exhaust system to remove any waste from the combustion, or with electrical heating elements powered by faraway smokestacks, which themselves minimize air pollution by diluting and dispersing particulates higher in the air. The combination of sophisticated machines and cheap, reliable energy has made heating our homes and cooking such a trivial issue that most of us have never considered its connection to cleaning up the air we breathe every day.

The ability to effectively deal with our own bodily waste has been one of the largest threats to human health. In third world countries it still takes a toll on human life. Cholera is a bacterial disease that is transmitted through the ingestion of food or water contaminated by human fecal matter which inhibits the body’s ability to absorb food and water, quickly resulting in death through dehydration.   Think about that the next time you hear the environmental control freaks talk about “harmony with nature.”

In developed countries sanitation problems were solved by not only keeping sewage separate from water sources but by treating it to render the most dangerous elements harmless so that it could be disposed of safely. This technology is another advance made possible by industrialization and it is yet another high energy intensive process for transforming our environment.

Fossil fuels not only helped transform our environment for the better but it helped transform ourselves for the better through health technology. Many energy-intensive technologies influence our overall health in a positive way. Food production, modern medicine, and sanitation require cheap, plentiful, reliable energy to make them available and affordable to as many people as possible.

Like all forms of energy, fossil fuels have risks and by-products but they also give us the energy and resources to minimize, neutralize, or even reverse any negative effect.  More broadly, if health is our concern, fossil fuels underlie the food and medical care systems that have created the longest life expectancy in history.

“Truth is incontrovertible.  Panic may resent it; ignorance may deride it; malice may distort it; but there it is”  Winston Churchill

Sources:  Fossil Fuels Are The Food of Food, by David Biederman; Don’t Trust The Global Warming Doomsters and Their Moral Outrage by Peter Foster; and How Fossil Fuels Cleaned Up Our Environment, by Alex  Epstein