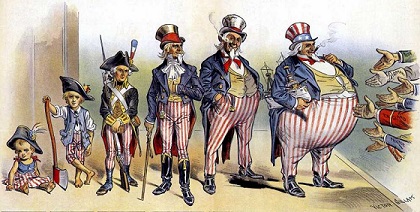 “The reason this country continues its drift toward socialism and big nanny government is because too many people vote in the expectation of getting something for nothing, not because they have a concern for what is good for the country.”  Lyn Nofziger

Americans surrendered their own Republic and their traditional morality to the Progressive god. While the “progressive era” ended in 1920, the election of FDR in 1932, brought the liberal progressive ideology to fruition, an ideology that continues unabated to this very day.

Once elected, progressive-minded newspaper editorial boards, politicians, and pundits exhorted FDR to become a “dictator.” The revered reporter and political commentator Walter Lippmann, for instance, told Roosevelt in a private meeting “…You may have no alternative but to assume dictatorial powers.” Eleanor Roosevelt even mused that America might need the leadership of a “benevolent dictator.

Indeed, many of FDR’s ideas and policies were almost indistinguishable from those of Mussolini. In fact, there were many common features among New Deal liberalism, Italian Fascism, and German National Socialism, all of which shared many of the same historical and intellectual forbearers. Conversely, FDR, Hitler, and Mussolini alike made many populist appeals designed to spark resentment against so-called “fat cats,” “international bankers,” and “economic royalists.” Such appeals were, and still remain, the tools of the trade for demagogues.

The New Deal was conceived “at the climax of a worldwide fascist moment, a moment when socialists in many countries were increasingly becoming nationalists and nationalists could embrace nothing other than socialism,” according to National Review columnist Johan Goldberg.   FDR not only expanded the size, scope and power of the government but gave himself and future presidents near dictatorial status, a status which FDR abused by having the FBI and other government agencies spy on domestic critics. He also authorized the use of the American Legion to assist the FBI in monitoring American citizens.

Prior to the “New Deal” people pretty much relied on each other or local governments and charity to get by but after FDR, the majority of Americans became dependent upon government programs and it continues to this very day as those on the left continue the push for continuation of government expansion with its collection of laws, regulations, and binding court decisions that make up the ”nanny state.” Those laws and regulations represent government at its most arrogant. Their message is clear: politicians and bureaucrats know more about how to live your life, manage your health, and raise your kids than you do.

Recent experience bears out the constant growth of government. From 2000 to 2016, federal spending more than doubled from $1.79 trillion to $3.85 trillion. Nearly 100,000 new federal rules were issued between1993 and 2016.  The Tax Code has grown to more than 4 million words long. According to the Competitive Enterprise Institute, federal agencies in 2016 issued 3,853 regulations while Congress passed 214 new laws – that’s 18 rules for every law enacted.

In 2017 mandatory spending was $2.5 trillion or 13.1% of GDP while discretionary spending was $1.2 trillion or 6.3% of GDP. The government run deficit for the past 50 years averaged 2.9% of GDP but in 2017 that jumped to 3.5%. Debt held by the public as a percentage of GDP for the last 50 years was 41% but in 2017 it had jumped to 76%. Our deficit is approaching $14 trillion and still growing by the interest it accrues.  Even worse, our debt holders are China, Japan and Saudi Arabia who have no interest in a “happy landing” for our future.

These numbers reflect a federal government that has broken free from constraints and that grows less and less accountable every year. Laws such as the Dodd-Frank Act and ObamaCare are so complicated that they cannot even be understood without a platoon of lawyers. The complexity of the tax code masks all the ways it benefits special interests and hurts ordinary Americans.

During the 2nd Century B.C., the Greek historian Polybius outlined the cycles of government from monarchs to aristocracies to democracies and back again. Each form of government works well until it loses its founding values, generally when heirs grow fat and greedy, and it is then overthrown. Democracy failed, Polybius wrote, “once people had grown accustomed to eating off others’ tables and expected their daily needs to be met.”

While a strong government is needed in areas of defense, it was never intended to be used as a panacea for society’s problems.  Government programs more often hurt those that they claim to be helping.  That big government provides assistance to the average citizen is a myth. As government has grown so powerful, it has become more aligned with the centers of power in society fostering cronyism rather than competition, treating people more like passive clients than as active citizens.

“Our present system is unique in world history, because over and above its physical and economic constraints, it demands of us total surrender of our souls, continuous and active participation in the general, conscious lie. To this putrefaction of the soul, this spiritual enslavement, human beings who wish to be human cannot consent. When Caesar, having exacted what is Caesar’s, demands still more insistently that we render him what is God’s — that is a sacrifice we dare not make!” Aleksandr Solzhenitsyn, From Under the Rubble

← Confessions of a ‘Christian Constitutionalist’
Fascists? Do Liberals Even Known the Definition? →