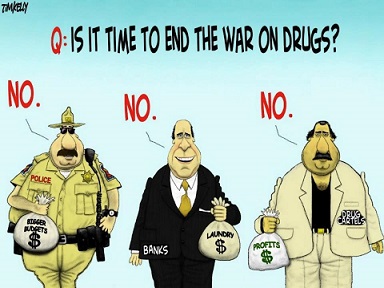 Earlier this year, Attorney General Jeff Sessions announced a new directive granting US regional attorneys greater authority to crack down on marijuana growers and dealers, even in states that had legalized it. Trump has also made his agenda known by announcing a desire to implement the death penalty for drug traffickers.

The ostensible reason drug warriors use to justify the government’s criminalization of certain drugs is the often-harmful impacts these drugs can have on the users.  But is it really government’s job to decide what we can or cannot do in regards to personal behavior that often doesn’t affect others?

Some will argue that there is no such thing as a victimless crime, that there is not a person in this country that has not been somehow negatively affected by the “choice” of some of their fellow citizens to use drugs.  Drug traffickers and dealers commit crimes against humanity by selling toxic substances to fellow citizens, most of whom experience their first use when they are far too young to understand the potential consequences.

John Stuart Mill, a British philosopher and political economist during the 1800s argued in “On Liberty” that the only purpose for which power can be rightfully exercised over any member of a civilized community, against his will, was to prevent harm to others. But who decides what constitutes harm?  We can all agree that children who are targeted by drug pushers should be protected, but adults who make a personal decision to indulge? Alcohol is a mind altering drug, addictive to some, and its abuse has cost society millions. Tobacco is also highly addictive and kills in a variety of gruesome ways. Yet both remain legal.

Lysander Spooner, a natural rights theorist, in his 19th century essay “Vices are Not Crimes” writes that self-harming activities should not come under purview of any government law. “Vices are those acts by which a man harms himself or his property. Crimes are those acts by which one man harms the person or property of another.” He continues that “unless this clear distinction between vices and crimes be made and recognized by the laws, there can be on earth no such thing as individual right, liberty or property; no such things as the right of one man to the control of his own person and property.”

While both sides have valid arguments, that would apply to alcohol and tobacco as well, it isn’t like the nanny state has been successful with the war against cocaine, or heroin, or methamphetamines or designer drugs!  What has the government done to stop the flow of illegal drugs into the country other than to pass laws that affect law abiding citizens more than the drug dealers?

The government’s “war” on drugs reflects a certain political arrogance that they can solve vices by passing ever more intrusive laws.  And no more can this arrogance be seen than in the DEA’s war against pain killers.

According to the American Academy of Pain Medicine, the annual cost of chronic pain, including healthcare expenses, lost income and lost productivity is estimated to be $100 billion. Seventy-six million Americans suffer from chronic pain and at least 9 million have pain severe enough to interfere with their jobs and lifestyle.  A recent survey warned that  50% of chronic-pain patients had, at one time or another, considered suicide to escape the unrelenting agony of their pain. While there are no statistics on the number of individuals who commit suicide because of chronic, untreated pain, various studies over the past decade found that fear of pain alone is what lies behind the majority of requests for doctor assisted suicide.

The government’s campaign against prescription drug abuse has stigmatized patients in need of pain medication. Their intimidation tactics and sting operations against doctors have created a climate of fear, with the predictable result that many doctors now won’t prescribe opiates at all or are only willing to prescribe amounts that are totally inadequate. As a result, many more people die from not having the prescription pain medications they need, than die from the drug abuse the government pretends it is trying to prevent. The DEA is actually killing chronic pain patients by intimidating their doctors.

“If you support the war on drugs in its present form, then you’re only paying lip-service to the defense of freedom, and you don’t really grasp the concept of the sovereign individual human being.” Neal Boortz