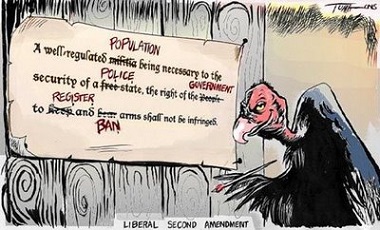 Taking a page straight out of 1984, Merriam-Webster’s online dictionary has changed the definition of assault rifle to fit pro-gun control talking points. The definition has been amended by adding “a rifle that resembles a military assault rifle but is designed to allow only semiautomatic fire.”

A whipping boy for gun control advocates, the AR-15 and its cosmetic features generate polarizing emotions among the gun control crowd. Add a little bit of fearmongering and sprinkle in some ambiguous political language, and you have the recipe for a national disinformation campaign.   For starters, “assault weapon” is a politically invented term gun control advocates have used over the past few decades to instill fear among the general populace, aided, of course, by the lap-dog media who enjoy creating lurid images of gun owners toting “military grade” weapons. To add even more confusion, media talking heads use terms like assault rifle and assault weapon interchangeably.

Assault rifle actually refers to a military firearm that possesses semi-automatic and automatic settings. AR-15s can’t be classified as assault rifles because they only feature a semi-automatic setting.  Alas, hard-hitting facts don’t jive well with sensationalist media figures and demagogic politicians hell-bent on advancing an anti-gun crusade at all costs. Now that political figures like retired Supreme Court Justice Paul Stevens are calling for the outright repeal of the Second Amendment, gun controllers smell blood in the water.

Just this week the Wall Street Journal laid bare a plan by banks and credit-card companies to find ways to identify purchases of guns in their payment systems, a move that could well be a prelude to restricting such transactions, according to people familiar with the talks.  So far the discussions are circling around the creation of a new credit-card code just for firearms dealers, similar to how they code restaurants, or department stores, that would enable them to trace gun (or ammo) sales.  Another idea pushed under consideration would require merchants to share information about specific firearm products consumers are buying. One bank has even had conversations with lawmakers about a bill to require merchants to report ALL purchases of certain “gun-related” products.

Of all individual activities in the United States, the right to bear arms has stood relatively strong in the face of the unprecedented levels of government intervention over the past century. However, Second Amendment supporters currently face a completely different political scenario where this precious right now hangs in the balance.

Jeffrey Kuhner, in an article at the Washington Times, Why The Left Hates Guns, reminds us that an armed citizenry is pivotal to a self-governing republic. Our founders enshrined gun rights not because they were bloodthirsty hicks who celebrated a culture of dueling, revenge and honor. They understood that pervasive gun ownership is a bulwark against excessive state coercive power. A self-reliant people, must be capable of defending themselves and their families from dangerous predators. Gun rights are essential to our system of limited government and individual liberty. And for the gun grabbers that is precisely why they want to confiscate your guns.

“To be more specific, it’s about whether power should lie with the people or with the government. Gun ownership puts power into the hands of the people and therefore they are less dependent on the government. Owning a gun at the time of need gives the law-abiding gun owner the ability to make the decision as to whether the use of force is lawful, right, and justified. The American Left doesn’t believe ordinary citizens have the ability to make such decisions, hence their love affair with gun control.” Red State, Real Reasons Liberals Hate Guns

← Karl Marx, the Devil, and a Socialist America
Freedom a Very Spiritual Thing, and with it Comes Danger →