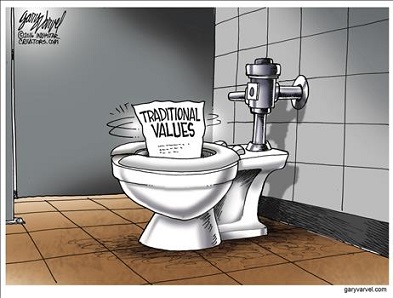 On September 7, 2016, the US Commission on Civil Rights issued a report, “Peaceful Coexistence: Reconciling nondiscrimination Principles with Civil Liberties.” Ignored by the Democratic controlled media, the report could easily become the playbook for those who believe that if there is a conflict between religious freedom and anti-discrimination laws, freedom of religion must lose.

According to the report, SCOTA reaffirmed the foremost importance of civil liberties and civil rights, including nondiscrimination laws and policies, over religious exemptions. “Overly broad religious exemptions unduly burden nondiscrimination laws and policies. Federal and state courts, lawmakers, and policy-makers at every level must tailor religious exceptions to civil liberties and civil rights protections as narrowly as applicable law requires.”

A comment to the report by Commission Chair Martin R. Castro, reveals the true nature of those who wrote the report. According to Castro, “The phrase religious liberty and religious freedom will stand for nothing except hypocrisy so long as they remain code words for discrimination, intolerance, racism, sexism, homophobia, Islamophobia, Christian supremacy or any form of intolerance.” In Castro’s racist rant against Christians, he claims that “religion is being used as both a weapon and a shield by those seeking to deny others equality.” He ends his rant with “this generation must stand up and speak out to ensure that religion never again be twisted to deny others the full promise of America.”

The USCCR report also pushes the idea that Constitutional and statutory protections of freedom of religion applies only to belief and not to conduct, eviscerating the right to free exercise as contained in the First Amendment.

The core of the dispute between partisans of sexual liberty and traditional religious believers is whether the two rights are of equal importance. In our constitutional order, the first reason that religious liberty takes precedence over sexual liberty is that this is enshrined in our Constitution. The First Amendment establishes the right to free exercise of religion, free speech, free association, and freedom of assembly. It does not establish the right to coerce other people into expressing approval of one’s self-expression.
The Constitution enshrines religious liberty as a first freedom because a large portion of Americans accept that religious claims are actually true, while others accept that religious claims may be true, and therefore a person’s duty to God may be seen as weightier than his duty to the state.

In a conflict between the partisans of absolute sexual liberty and freedom of believers to disprove of certain behaviors, feelings may be hurt, but there is no right not to have your feelings hurt. Indeed the first amendment guarantees the right to say things that may hurt some people’s feelings.

Individuals of all faiths or no faith, and from all points on the political and ideological spectrum, should be alarmed at the mounting assault on the free exercise of religion and freedom of religious expression. The erosion of one constitutional right—especially one as fundamental as religious liberty and the freedom of speech—may serve as a precedent for the erosion of other rights to the detriment of all Americans.

“We should be eternally vigilant against attempts to check the expression of opinions that we loathe and believe to be fraught with death.” Justice Oliver Wendell Holmes

← As Go the Pulpits, So Goes the Nation
‘Spiritual Deception of the New Age’ →