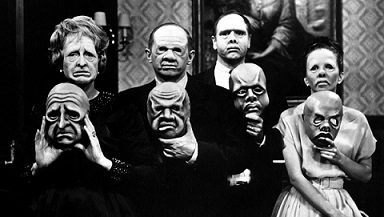 By now you’ve probably gotten the idea that something really strange is happening  to our government and to our country.   Nothing is as it seems.  Truth is tossed aside like yesterday’s trash.  The left is rooting for the destruction of our Republic.  Unelected bureaucrats are attempting to control Congress, the judicial system and even our duly elected President.

The most forceful parts of this bureaucracy, the “deep state,”  are its agents who regulate and restrict what we can do and say, who spy on everything  we post on social media,  who read our emails, listen in on our phone conversations,  and track our location throughout the day, whether it is pings on cell phone towers, license plate scanners or facial recognition cameras.  And as frightening as all that is, the scariest part is those people who don’t see anything wrong with it – the ones who rush out to purchase the latest “smart device” that the deep state uses to spy on our every move.

How did this happen?  When did we raise the white flag?

During his eight years in power Obama and his left-wing administration changed the American government and transformed America into the mess we see today.   Obama weaponized the federal bureaucracy  to advance his agenda through heavy environmental regulation, limits on businesses, new taxes, homosexual “marriage,” restrictions on religion, uncontrolled immigration, amplification of racial issues, outreach to Muslim nations, a “reset” with Russia, leaving Iraq, reviving Iran, rejecting Israel, forcing implementation of Obamacare, enormous increases in power for the federal government, and a presidency that rejected constitutional restraints.

Under Obama, the National Security Agency, ignoring the rule of law,  spied on citizens’ international communications, private citizens and members of Congress.  It is only recently that the depths of his depraved political motives came to light when we learned that he had been using the CIA, the FBI, the NSA, etc. to spy on Trump’s presidential campaign in an attempt to assure Hillary Clinton’s victory.

During the time of the campaign, Hillary was under investigation for using non-secured,  email servers and private messaging software to conduct State Department business, even when in foreign countries,  exposing official communications to hacking.  She and her “team” were later found to have deleted 33,000 messages and destroyed devices  to keep her illegal activity secret.  We won’t even get into Benghazi, the selling of uranium to Russia, her “shadow” Huma Abedin whose family has ties to the Muslim Brotherhood,  or the “questionable” contributions to the Clinton Foundation during her time in office.

But  unlike the FBI’s “investigation” into Hillary’s affairs, the illegal spying and secret “investigation” into Trump’s campaign team was kept secret.  Following Trump’s victory, the Obama team of misfits went into high gear, claiming that Russia had “rigged” the election in Trump’s favor.  Working behind the scenes to expand NSA’s ability to share information with federal intelligence agencies,  the Obama Justice Department and his fellow comrades that included the FBI the CIA, and even Rhino John McCain, spread information (lies) about Russia’s efforts to undermine America’s election system, by “exposing” contacts between associates of President Elect Trump and his campaign staff, hoping to set him up for  future indictment and/or impeachment.

After 18 months and millions of wasted taxpayer dollars, this investigation has resulted in charges to Paul Manafort and Richard Gates for financial crimes going back 8 years related to work in the Ukraine; charges against Michael Flynn for a “non-material” lie and George Papadopoulos for lying to the FBI.   In February of this year, a multi-part indictment was brought against 13 Russian citizens connected with a so-called troll farm that alleges the group bought Facebook and Twitter ads, planned small rallies and otherwise “meddled” in the 2016 election.

This troll farm wasn’t exactly a deep secret – the New York Times profiled them in 2015, when Obama was president.  The social media campaign started when the U.S. was considering war in the Ukraine years before Trump announced his candidacy and about half of their modest ad buys took place after Trump’s election.   Deputy Attorney General Rod Rosenstein made clear there were no allegation in this indictment that any American, including on the Trump campaign, “was a knowing participant in the alleged unlawful activity.”

Government exists solely to maintain a nation’s rule of law, or at least they are supposed to.   But America has now become a place where the government is almost completely dominated by a deep state of left-wing activists, agents, politicians and bureaucrats, spying on voters and their representatives, colluding to advance their own ideologies and their own personal gain. The government is usurping power and using it to destroy the Constitution and the rule of law itself!

It was a great day when the radical left failed to crown Hillary as America’s future tyrant.  It is also amazing, at least to me, that Trump won and continues to win against so many direct assaults by politicians, including his own party, journalists, commentators,  left-wing judges, and bureaucrats inside the government itself and against great odds has been able to revive some of America’s physical greatness.

It is the most  amazing that people like Obama, the Clintons, Holder, Clapper, Rice, Comey, McCabe, Strzok, McCain, Page, Ohr, Steele etc. have been unable to hide the truth of their misdeeds from the American public.  Who said God has no sense of humor?

Communism counts its opportunities in terms of decades – not of weeks. Its means of aggression consist not only of nuclear weapons and missiles with enormous boosters, and not only of spies, agents and terrorists, but of great masses of men and women, deluded by a common ideology which inspires them with a false hope. Robert Kennedy

Sources:  What Mueller Has and What He’s Missing by Peter Van Buren; The U.S. Government Is at War With Itself,  The Trumpet;

← Who Are the Real Victims of Bullying?
If Abortionists Used Guns? →