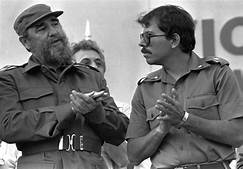 Nicaragua is close to following Venezuela down the rabbit hole.  According to a Time magazine correspondent living there, it is in “in full cardiac arrest.”

Since April protesters have taken over cities, set up roadblocks and attacked pro-government forces.  The protests began when Ortega tried to reduce pension benefits to fund the country’s struggling social security program and continued even after Ortega sent in his police and armed militias to attack them.  More than two months of demonstrations have left at least 212 dead, numerous people “missing” and many more wounded in the bloodiest protests in the Central American nation since its civil war ended in 1990.   The country is descending into anarchy as its leader desperately tries to maintain his hold on power.

Ortega ruled Nicaragua from 1979 to 1990 with an iron hand, first as Coordinator of the Junta of National Reconstruction and then as President.    A leader in the Sandinista National Liberation Front (FSLN), Ortega, who received training in guerrilla warfare from Fidel Castro’s Marxist government, played a crucial role in forming the mass uprisings in 1978-79 that resulted in the overthrow and exile of the existing government.  Ortega became leader of the ruling multi-partisan Junta of National Reconstruction and in 1984 as a candidate of the FSLN, he won Nicaragua’s free presidential election.  Defeated in his bid for reelection in 1990, 1996, and 2001, he finally won in 2006 after securing a large plurality among Nicaragua’s poor.

A Marxist-Leninist himself, Ortega spent his first year in office pushing a socialist program of nationalization, redistribution, literacy programs, maintaining a free trade agreement with the U.S., and creating private-sector jobs.  By his second year, however, he began to restrict news coverage, denying journalists access to government reports and aligned himself with leftist Venezuelan President Chavez.  With the help from Marxist in his own government, Ortega had the Nicaraguan Supreme Court lift the restriction on consecutive reelections allowing him to run in 2011, an election he “won” amid cries of voter fraud.  Another change to the constitution allowed him to run once again in 2016 with his wife as vice president.

Since the protests began, demonstrators have set up more than 120 roadblocks throughout Nicaragua, hamstringing transportation. Some cities are completely closed off to pro-government forces. One of these cities, Masaya, was the heart of the Sandinista movement. Now this city is at the front of the rebellion against Ortega. They think that Ortega has “betrayed his revolutionary roots,” according to the Wall Street Journal.   The demonstrators are not planning to give up without a fight. A Masaya shopkeeper told the WSJ that  “They will need 150,000 coffins if they want to defeat us.”

Nicaragua is not a huge Central American nations but is strategically important, especially because of its proximity to the United States. More than that, instability in nations like Nicaragua has ripple effects elsewhere—whether from an increase in illegal immigrants fleeing a crisis in the country, or from the pressure that a collapsing government puts on surrounding nations.

Nicaragua is also unique because of its connections with both Russia and Iran, and the fact that China is hoping to build a canal through the country to rival the Panama Canal which, if built, will give China an exclusive naval foothold in the region which the U.S. previously dominated.

Much of Nicaragua’s relationship with Iran centers on recent economic cooperation. Joint projects between the countries have included deals on trade, development and aid projects that included over $230 million for a hydroelectric dam, $2 million for a new hospital, and $350 million to build a seaport at Monkey Point.

Europe is also deeply interested in Central and South America.  With many of these nations strapped for cash, they welcome investment from anyone and Europe has been freely handing out cash, making it one of the largest investors in Latin America.

Whether or not Ortega manages to hold on to his control of Nicaragua, this crisis shows how unstable his country is. And Nicaragua isn’t the only one—other Latin American countries like Venezuela and Mexico are barely holding up. Nicaragua’s protests highlight the fractured state of many Central and South American governments, an instability that other powers are happy to take advantage of.

Source: Will Nicaragua Be the New Venezuela? by the Trumpet, and , Nicaragua-Iran Foreign Relations, by Critical Threats.org