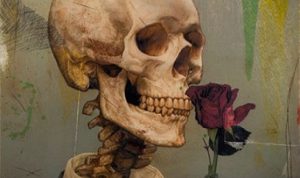 The smell of death surrounds us.   No one knows why people commit mass murder, or why deaths of despair are on the rise.  In our secular culture, death seems to have no reason – that is until we look more closely.

The culture that formed the young men who have killed so many in mass shootings, or who kill themselves with drugs, alcohol, and guns to the head, cannot be blamed on the usual suspects, the “bigots” of flyover country and the “religious right.”  On the contrary, it is institutions such as Harvard, Google, and the Ford Foundation that determine the mainstream. Their priorities set the tone, with the buzzwords of “multiculturalism,” “diversity,” “inclusion,” and other omnibus terms for a post-traditional way of life.

With their vast wealth and prestige,  the elites sponsor attacks on the usual bugbears: heteronormativity, patriarchy, logo-centrism, and racism.   Today’s culture is the result of a more than fifty-year effort of deregulation, rejection of traditional norms, and denigration of commonplace pieties.

At every level, the elites oppose traditional regulation of behavior based on clear moral norms, preferring a therapeutic and bureaucratic approach.  They seek to decriminalize marijuana.  They have deconstructed male and female roles for children.  They correct anyone who speaks of “sex,” preferring to speak of “gender,” which they insist is “socially constructed.” They have ushered in a view of free speech that makes it impossible to prevent middle school boys from watching pornography on their smart phones.  They insist upon a political correctness that rejects moral correctness.

The upshot is American culture circa 2018. Our ideal is a liquid world of self-definition, characterized by plenary acceptance and mutual affirmation. In practice, the children of our elites are fortunate: Their families and schools carefully socialize them into the disciplines of twenty-first-century meritocratic success while preaching openness, inclusion, and diversity.  But the rest are not so fortunate.  Most Americans gasp for air as they tread water.  More and more drown.

Though we are each responsible for our own actions, a society should be judged by its effect on the weakest and most vulnerable.  As recently as my youth, a racist culture encouraged some of my white friends in high school to frame their resentments and mask their insecurities with racial slurs—as it had licensed an earlier generation to dominate and humiliate others.

Today’s American culture is very different.  It promises inclusion, but delivers a punitive social hierarchy of celebrity and professional success.  In a world of limitless freedom “to be the best you can be,” all failures are self-wrought.  The possibility of self-damnation is relieved only by narratives of oppression, which means that adolescent suffering (and adult suffering as well) must be someone else’s fault. So we toggle between desperate struggles for success and resentful demands for retribution.

Liberalism has always been an elite project of deregulation. In the nineteenth century, it sought to deregulate pre-modern economies and old patterns of social hierarchy. It worked to the advantage of the talented, enterprising, and ambitious, who soon supplanted the hereditary aristocracy.

In the last half-century, liberalism has focused on deregulating personal life. This, too, has been an elite priority. It makes options available to those with the resources to exploit them. But it has created a world in which disordered souls kill themselves with drugs and alcohol—and in which those harboring murderous thoughts feel free to act upon them.

It’s time for us to wake up. The Ford Foundation and the Human Rights Campaign, the Southern Poverty Law Center and the National Organization for Women, Harvard and Stanford Universities, the Ford Foundation, George Soros’ Open Society: These are the pillars of today’s establishment, and the architects of our culture of death.

Source:  The Smell of Death, by R.R. Reno, First Things can be read in its entirety at the link provided.

← Jesus’ View of Immigration
Liberal ‘Clergymen’ – Of Their Father, the Devil →