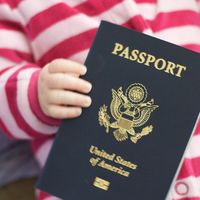 TODAY, thanks to power grabbing open-border politicians,  YOU JUST SNEAK ACROSS THE BORDER, or, if you are wealthy enough, you can purchase a birth tourism package arranged around your due date and take home a little American bundle, or stay in the US since jus soli “birthright citizenship” pretty much guarantees that you will never be deported.

These children  of illegal immigrants instantly qualify for welfare and other state and local benefits and with the passage of the 1965 Immigration and Nationality Act, the child may sponsor other family members for entry into the United States when they reach the age of twenty-one.

While these children are not responsible for their parents decision to break U.S. law, they are being used by Democrats and the Republican powers-that-be  as a political tool to push an agenda.  And, I don’t know about you, but I have had it with the far-left telling me that the 14th Amendment requires the U.S. to grant citizenship to every child born on American soil. IT IS A LIE !

Dr. John C. Eastman, Dean of Chapman University’s law school in Orange, California, is among the leading scholars in the nation on Constitutional law and has testified before Congress on birthright citizenship. He states plainly that the framers of the 14th Amendment had no intention of allowing another country to wage demographic warfare against the U.S. and reshape our culture by means of exploiting birthright citizenship. “We have this common understanding of when you come here to visit that you are subject to our jurisdiction. You have to obey our traffic laws. . .But the framers of the 14th Amendment had in mind two different notions of ‘subject to the jurisdiction’. There was what they called territorial jurisdiction – you have to follow the laws in the place where you are – but there was also this more complete, or allegiance-owing jurisdiction that held that you not only had to follow the laws, but that you owe allegiance to the sovereign. And that doesn’t come by visiting here. THAT COMES BY TAKING AN OATH of support and BECOMING PART of the body politic. And it is that jurisdiction that they are talking about the in the 14th Amendment.”

Echoing the sentiments of Eastman, Professor, Dr. Edward J. Erler, Senior Fellow at the Claremont Institute for the Study of Statesmanship and Political Philosophy, points out that the framers of the 14th Amendment sought to reassure Congress in 1868 that the citizenship provisions did not cover –  nor were crafted with the intent to grant – citizenship to children of foreign nationals born in this country. Specifically, native American tribes were not covered under the citizenship clause because they clearly owed allegiance to their tribes and therefore were not subject to the jurisdiction of the U.S. government – a clear indication that jurisdiction is indeed contingent on exclusive allegiance.

Birthright Citizenship came about as a footnote By Justice William J. Brennan on his 5-4 opinion in Phyler v. Doe, asserting that “no plausible distinction with respect to the 14th Amendment can be drawn between resident aliens whose entry into the U.S. was lawful and resident aliens whose entry was unlawful.” Brennan’s authority for this statement appeared in an obscure book written in 1912 by Clarence L. Bouve. Justice Brennan’s  footnote defies the intent of the authors of the 14th Amendment.

Senator Jacob Howard of Ohio, author of the citizenship clause contended that “every person born within the limits of the United States and subject to their jurisidction, is by virtue of natural law and national law a citizen of the United States.” Almost everyone would have understood natural law to refer to the social compact basis of citizenship, as enumerated in the Declaration of Independence. Natural law was a repudiation of the notion of birthright citizenship that had been the basis of British citizenship which was based on a feudal law. Senator Lyman Trumbull, Chairman of the Judiciary Committee and a powerful supporter of the 14th Amendment remarked on May 30, 1866, that the jurisdiction clause includes those   “NOT OWING ALLEGIANCE TO ANYBODY ELSE.” Senator Howard agreed with Trumbull’s assessment that “the word jurisdiction as here employed, ought to be construed so as to imply a full and complete jurisdiction of on the part of the United States, coextensive in all respects with the constitutional power of the United States, whether exercised by Congress, by the executive, or by the judicial department; that is to say, the same jurisdiction in extent and quality as applies to every citizen on the United States now. Certain, gentlemen cannot contend that an Indian belonging to a tribe, although born within the limits of a State, is subject to this full and complete jurisdiction.”

American Citizenship Is A Privilege, Not a right.   Ending Birthright Citizenship does not punish children – BUT ALLOWING IT CONTINUES THE PRACTICE OF REWARDING LAWBREAKERS.

← I Don’t Identify With People Not Proud To Be American
Is the Suicide Solution Becoming the New Norm in America and the World? →

2 comments for “BirthRight Citizenship Is A Scam”