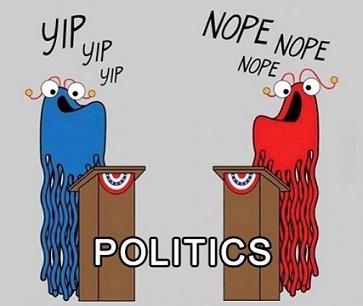 Yesterday I  received another of those  fundraising “opinion survey” from the RNC assuring me that they have my back. While it is true that we now have a Republican president who is working very hard to keep all of his campaign promises, it is also true that he has had to fight all those powers-that-be elitist within his own party. How stupid do they think we are?

It has been my pleasure to write a scathing retort on every  survey and return it in their postage prepaid envelope, usually padded with a few extra pages of junk mail.  Okay, so that’s childish, and no,  I’m not dumb  enough to believe anyone actually reads my comments – I’m pretty sure that as soon as the envelope is open and no check falls out, my comments hit file 13.

Chuck Baldwin wrote a column in 2014, Steve Daines: So Far, More of the Same, that pretty much covers my disgust with the current elitist powers-that-be, especially as we near the 2018 elections.  You can read his article in full at this link.

Every vote casts either helps to preserve and secure our liberties or diminishes  and dismantles our liberties.  And at the end of the day, it doesn’t matter  a tinker’s dam how sincere the politician seems to be, or whether he has an “R” or “D” behind their name, or whether they claim to be a Christian, or where they go to church, or how well-intentioned they are.  At the end of the day, the only thing that matters is the way they vote.”

The American people don’t have to live with a politician’s sincerity, or party affiliation, or his or her religion, or good intentions.   But what we do have to live with are the laws that they enact.  Every law has the power of a gun (or a whole bunch of guns) behind it.   Every law has the potential to take our property, our wealth, our liberty, and our lives.  Our first and greatest president, George Washington, clearly warned us of this potential when he said, “Government is not reason; it is not eloquence; it is force! Like fire, it is a dangerous servant and a fearful master.”

Any vote cast that does not secure our liberties and that does not comport with the Declaration, the Bill of Rights, and our Constitution, should be regarded as an act of tyranny. And make no mistake about it: tyranny can come at the hands of 535 congressmen and senators as much as at the hand of one king.

There is an old saying –  if your actions do not prove the truth of your words, then your words are nothing more than lies.  The policies promoted by the Democrats are not “for the people.”  Rather, they are for only a limited set of people “who agree with their philosophy and principles.”  Thankfully, these far-left Democrat “principles” do not appear to appeal to the masses.

The American public are smarter than the left gives them credit for.  We are tired of empty words, lies, and foolish rhetoric.  We want sincerity, transparency, action, and results. We want what Trump has promised and delivered – available jobs, a strong economy, security at home, and an “America-first” approach and attitude.

So to those Republican elitist who are more than willing to out their Conservative base, who consort with the Democratic left-wing to destroy this county, and to the left-wing Communist who would sell their mother for a chance to rule, I say – watch your back.  There are consequences!

← How About Some Common Sense
Changing God’s Word →