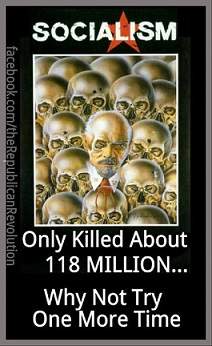 “We cannot expect Americans to jump from capitalism to Communism, but we can assist their elected leaders in giving Americans small doses of socialism until they suddenly awake to find they have Communism.” Nikita Khrushchev

Bernie Saunders is actually rather proud to call himself a socialist as are so many of his fellow Democrats. The fact that Bernie has so much support from left-wing Democrats and millennial’s only goes to show how dangerously ignorant the American people have become. Socialism is the transitional stage from capitalism to communism.  Even Lenin admitted that “the goal of socialism is communism.”

The Communist Party is not a political party, it is a ruthless totalitarian dictatorship run with absolute power by a few men at the top, all of whom are subservient to a dictator absolute. When you give one man that kind of authority and power, it always leads to tyranny. In the United States, the “party” only has one objective – the destruction of our nation.

Alan Johnson, professor of Democratic Theory and Practice at Edge Hill University, in an article for World Affairs in 2012, wrote that Communism, a “worldview, the source of immense suffering and misery, and responsible for more deaths than fascism and Nazism, is mounting a comeback; a new form of left-wing totalitarianism that enjoys intellectual celebrity but aspires to political power.”   Communism did not die, it simply went underground, content to wait for its opportunity to once again rear its ugly head.

The Communist Manifesto, the “sacred text” of Communism, stresses the need for a total overthrow of existing governments and concludes with words that may sound eerily familiar to modern news watchers: “Let the ruling classes tremble at a Communist revolution. The proletarians have nothing to lose but their chains. They have a world to win.”

In a speech at the United Nations on October 16, 1960, Khrushchev bragged that “the U.S. would be defeated without a shot being fired.” It was only in 1970 when a KGB agent, Yuri Bezmenov,  defected that the Soviet stealth attacks on our Republic were made known.  Bezmenov warned that the Soviet Union had infiltrated universities with radical leftists, established Communist staffed newspapers and infiltrated American churches as part of stealth ideological subversion. And even after the fall of the Soviet Union, according to a Senate investigation subcommittee, the Communist Party USA received from $2 to $3 million a year from the Kremlin to continue this subversive ideology.

Look around you – you can see the Communist agenda at play.  We’re told we no longer need a Constitution – its old – its outdated.  Most of the Communist supported left-wing academia agrees. Even Supreme Court Justice Ruth Bader Ginsburg said the Constitution is outdated and should not be used.  But the Constitution IS the supreme law of the United States. Empowered with the sovereign authority of the people by the framers and the consent of the legislatures of the states, it is the source of all government powers, and also provides important limitations on the government that protect the fundamental rights of United States citizens. If we toss it out what do we have left? The answer of course is chaos, mob rule and eventually Communism.

John Stossel noted that 2017 marked the the hundredth anniversary of one of the worst mistakes ever made – the Communist revolution in Russia, which eventually killed almost 100 million people, most of which died in famines after socialist tyrants forced them to practice inefficient collective farming.  Millions more were executed in political purges. Lenin ordered the hanging of 100 property owners at the very start of the Revolution, saying people needed to see the deaths of “landlords, rich men, bloodsuckers.” Mass murder and starvation rapidly increased the death toll after that.

Even as the Russian regime killed millions, some journalists and intellectuals covered up the crimes. Sound familiar?  Stalin kept most media out, so few Americans knew that millions were starving, but New York Times writer Walter Duranty saw it first-hand. And still, according to Tom Palmer of the Atlas Network, he “covered up Stalin’s crimes because he wanted to support “the cause.” Even though he “saw the truckloads of bodies he wrote on the front page of The New York Times how wonderful everything was,” and even won a Pulitzer Prize for his lies.

In some ways, times haven’t changed that much. In 2017, the Times ran a series of essays commemorating the anniversary of Russian Communism, including one piece arguing that sex was better in the Soviet Union because the Revolution destroyed macho capitalist culture. Seriously!!!! While they did have a few editorials about the evils of Communism, they also featured numerous pieces that either celebrated it or make excuses for it.

As historian Sean McMeekin wrote in his book, The Russian Revolution, after communism’s “century of well-catalogued disasters … no one should have the excuse of ignorance….Today’s Western socialists, dreaming of a world where private property and inequality are outlawed, where rational economic development is planned by far-seeing intellectuals, should be careful what they wish for. They may just get it.”

← Changing God’s Word
Do Morals Change with the Times? →