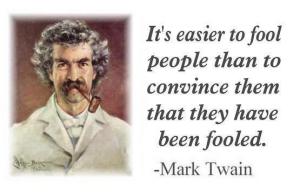 Ignorance is bliss, or is it?  Actually that statement is known as an idiom to describe  a refusal to acknowledge the reality of a situation.  Some people hide in that “ignorance” because the truth is unpleasant or too overwhelming or they just do not want to worry about it. They prefer someone else take the burden of dealing with whatever the issue is, in other words, that someone else stands-in for them as the adult because, well, being an adult means you have to deal with circumstances as they exist.

Adults know that government handouts are not free.  Being an adult means that you know that the fictitious “free” ride eventually ends, that the money eventually runs out if half the people take without contributing, that if you do not have a strong military freedom is eventually taken from you and that if you have a press that is aligned with the government, ignorance is the result.

Ignorance is not necessarily a reflection of lack of intellect. Consider all of the Think Tanks, ivy-league graduates and media analysts who either choose to ignore or cannot see the internal and global assault upon our great nation.  Some Americans do not perceive the threat because the government’s lower educational standards have dulled their analytical processes.   Such is the infertile ground that has allowed the perpetrators to rush forward towards America’s demise as they pursue their quest to bring down a republic of free people and repress speech that is counter to their own.

History records that their well-worn ideology, the religion of socialism that drives their actions, has torn nations asunder or rendered them defenseless. The alarm bells to warn a free and self-sufficient nation of Americans have long been sounding. Many have chosen to ignore the reality at hand.

What has kept the American people in the dark – which is a metaphor of things to come – is lack of knowledge.  And that lack of knowledge has allowed the changes that they are ill-prepared for or simply just choose to ignore.   And unfortunately, those who cower behind that veil of ignorance is bliss will have a rude awakening.

The thought of the coming hardships, regardless of political differences, that will be imposed on all Americans is deeply distressing. There is a great grouping of citizens in the middle of extremist ideologies that firmly believe we are all one people and that even those who are remiss, incapable or faulty in their duty to their country and their fellow Americans, that they must also remain protected by the very freedoms and rights upon which this nation was founded.

Which might go a long way into explaining why millions of Americans cast their vote to receive from the government coffers without realizing that their vote delivers noting more than a temporary micro impact with macro consequences?

Promises for free contraception to life-long welfare to cross-dressing in the workplace distract voters from the bigger picture.  An already in-play strategy involves, in due course, sacrificing their money, their health, their rights and their freedoms to a force at work beyond their limited view. They have become willing targets. For those of us who care about all of them and their freedoms and rights as much as we do our own, they must understand that there is no safe haven outside our shores.

America’s future cannot be entrusted to those who someday will wake up and wonder what happened to their freedoms. Whether it is their rights under the Constitution to exercise freedom of speech and freedom to worship to more implicit freedoms not to pay international taxes, freedom to have a say in your child’s education, freedom to vote out zealous regulators of your personal life, energy usage, childbearing or even current access to the Internet.

Everyone deserves to know the truth. There is a current time stamp on how long hapless ignorance can remain bliss. That clock is ticking.

“If a nation expects to be ignorant and free, in a state of civilization, it expects what never was and never will be.” Thomas Jefferson

Source:  When ignorance is no longer bliss by  Sharon Sebastian