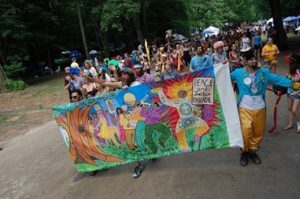 Picture Woodstock, Birkenstocks, and unorthodox Jesus references and you will have an image of the annual Wild Goose Festival in Ashville, North Carolina.

The Wild Goose, a Celtic metaphor for the Holy Spirit, is “a festival of justice, spirituality, music and the arts” run by the religious left to “discover where justice and spirituality intersect,” according to organizers. Attendees are a mixture of older liberal mainline Protestants and younger disaffected post-Evangelicals, who come together each year to celebrate anything and everything unrelated to Christianity.

In past years the festival has featured a drag queen gospel performer, a neo-pagan cosmic mass, a chili cornbread Eucharist, pagan altars constructed to honor deceased progressive heroes, among other spiritual innovations, and a “water blessing ceremony” where attendees were instructed to remove their shoes, because they were standing on “holy ground.”

This year’s festival featured speakers such as: 1) Diana Butler Bass who believes that Christianity is a living, ever-evolving faith; 2) Tony Campolo, former Bill Clinton spiritual advisor, leader of the Evangelical left and an avid supporter of the gay rights movement in the church; 3) Brian McLaren, a pastor who doesn’t recognize the Bible as the inspired and infallible word of God; 4) Jen Hatmaker, a Trump hater and LBGT supporter; 5) Otis Moss, a black liberation theologist at Trinity United Church of Christ; and 6) Jacqui Lewis, a Presbyterian minister specializing in gender and LGBT justice, to name but a few.

Also seen at the 2018 festival was a breakout session called “Reproductive Justice is______: Moving Beyond the Pro-Choice/Pro-Life Binary “ which turned out to be nothing more than praise for the murder of innocent unborn children. Two of the three panelists worked for Planned Parenthood as abortion doulas and the other for a left-wing nonprofit group aligned with abortion rights. Only one of the panelists, Mary Button, claimed to be Christian and a member of the Evangelical Lutheran Church of America. She informed the audience that her “favorite abortions” were the ones where women were “OK with that decision.” One woman at the event who described herself as an elder of the Presbyterian Church (USA) and an abortion provider reminded the group that her church “has been pro-choice” for a long time and “[abortion] is considered an absolutely correct moral choice.”

The historic and notoriously liberal Calvary Baptist Church in D.C. hosted a session titled “A World Without Walls” where calls for open borders abounded. After all, they asserted “All of Scripture is one big story about immigration, displacement, and return.” Maria Swearingen, a married lesbian co-pastor at the church made the claim that Christ suffered because “he was mucking up what the state was trying to do;” and then claimed illegals suffer the same as Christ “because of the state.”

A session from the Evangelical Lutheran Church, “Disruptive Worship: Liturgy for Justice,” made the claim that references to light and dark only reinforced racism. “The word light can be associated with skin color in English – it’s not Hebrew,” she claimed, “but when every week light is lifted up as good and dark is lifted up or thrown down as bad, that just reinforces whiteness and the hierarchy of race.”

Roger Wolsey, a United Methodist campus minister, led a session “Mystic or Bust!” where after he encouraged progressive Christians to embrace mystic practices as part of their daily spiritual expression, he invited participants to stand, face North and “embrace some good Northern Spirit.” After offering a prayer to the North spirit, he repeated the exercise facing East, South and West, with a prayer for each spirit.

And we must not forget Hannah Shanks, author of “This Is My Body” which she says is a story about bodies and blood and babies and boobs and Jesus and what happens when we start to listen to women and to the new way God is moving in the world. Leading a “service” of Rememberance and Reclamation she passed around bread, a cup, a basin, a pitcher and towel which she claimed were all “symbols of Christian calling and work” and then gave everyone temporary tattoos reading “this is my body,” inviting them to apply them to parts of their body they struggled to love or to ask a neighbor to do it for them as an act of being loved.

San Francisco Theology Seminary, a supporter of the yearly festival, posted on their site “If Wild Goose is the festival, SFTS is the after party….!!” Shannon LeMaster-Smith, a Deacon at the United Methodist Church, posted a comment concerning this years festival – “WGF is a place where the Spirit’s presence is thicker than the humidity and the Kingdom of God is a glimmer in each person’s eyes.”

The Wild Goose festival encapsulates much of what is wrong with progressive Christianity. Theological truths and doctrines are ignored and downplayed in favor of overt political posturing and pagan worship. It is a place where the left has pledged to throw off the yoke of “religious piety.”

I do believe they have succeeded beyond their wildest dreams.

← A Church That Is Right When the World Is Wrong!
Any Politician Who Lies Goes to Prison! →